THE WALKING DEAD Talks Too Much

Throughout this season of THE WALKING DEAD, the series' writers have made it clear that everything our heroes are doing in the war they've launched against the Saviors is being done in accordance with some master Plan. Though the characters are all aware of this Plan (and Rick drones on endlessly about it), the writers have so far declined to share it with the audience, which has presented a raft of dramatic problems that seriously boiled over during tonight's ep.

Up front, it should be acknowledged that in a better series, viewers would have been introduced to at least some broad outline of this plan from the beginning and the writers would have milked it for suspense. Can our heroes succeed at this goal, capture this-or-that objective, take out this critical target, etc.? Will the Saviors anticipate what's up and counter or will Rick prove to be a few steps ahead of them? What unexpected developments will monkey-wrench both sides along the way? The season could have played out like an awesome game of action-movie chess and, at times, poker, with goals, reversals, fake-outs as the two sides try to outdo one another. Instead, viewers have been left entirely in the dark, which has reduced most of what has happened so far to just a lot of random mayhem with no obvious point beyond generating a string of emotional scenes--yet another example of TWD's soap melodrama model completely ruining what should be a great show.

Tonight's ep, "The King, the Widow & Rick," opens with the leaders of the various communities sending one another letters, essentially progress updates. This doesn't make a lick of sense--whatever mailman is driving around the apocalypse delivering them could just as easily have acted as a messenger himself and simply told everyone what they needed to know. Instead, we're to believe everyone stopped in the middle of this rapidly-developing action and wrote letters. Not necessarily helpful ones either--much of what's quoted from Rick goes on about how many brave people have sacrificed their lives so that the Plan may succeed. All of these communities have suffered casualties. Do any of them really need to hear such sentiment? Is sitting and writing such things really the best use of Rick's time in such a situation? "The plan is working." Rick's text assures everyone. "We're doing this. We're winning." Something else Rick wrote immediately caught my attention. Regarding Negan's headquarters, he records, "the lookouts are all around the compound. They open a door, we fire." Last week, the Saviors had speculated that there may e snipers outside. Perhaps they'd even observed said snipers. The other thing that happened last week: Negan not only opened a door, he opened two and between them, he fought his way through a long stretch of zombies across open ground and no sniper even so much as took a shot at him, even after Gabriel, who was accompanying him, began shooting zombies. That isn't a case of shitty snipers asleep at their posts; it's shitty writers asleep at theirs.

Rick, in what amounted to another glorified cameo, tried and failed to negotiate a new treaty with the Garbage People. Demonstrating yet again what an imminently skilled leader he really is, Rick doesn't take an armed force along so he can negotiate under a white flag and then leave; he just turns up at their landfill alone--the camp of a faction aligned with the same enemy against which he just launched a war earlier that same day. And then he threatens them; if they don't join up, they'll be destroyed. Jadis promptly turns him down--takes her a matter of seconds--and locks him up, presumably to turn over to the Saviors. "Talks too much," she says of him as he's led away, which comes across as a funny meta-commentary. With Ezekiel depressed and unable to pull himself together, Rick's capture leaves only Maggie. In the first day of this war,[1] two of our heroes' three leaders have already been taken out. Not by the Saviors but by their own shortcomings.[2]

One rather suspects that wasn't part of Rick's Plan.

Much of tonight's action, however, was taken up by several of our heroes, in various combinations, deciding to go completely off-script from any Plan that may exist.

The writers apparently remembered Rosita and Michonne, who haven't appeared on the show in a month-and-a-half. Whatever part they were supposed to play in the Plan, they were supposed to be at the Safe Zone but they decide, instead, to team up, take a car and drive all the way over to the Saviors' zombie-surrounded compound because Michonne just wants to see it for herself. No kidding, that's why she wants to go. And Rosita goes with her because, well ,why not, right?[3] They're on the payroll--the writers need something for them to do.

Driving down the road, they hear some loud music coming from somewhere, stop and go to check it out. They find a pair of Saviors in a warehouse with a truck loaded with huge speakers, a contraption that would be perfect for luring zombies away from Negan's compound. These Saviors aren't driving it around on orders to do that though. They've been to the compound and describe the carnage at the scene, which means they're two more those crack snipers failed to nail, but they don't know who or what caused it. They apparently went to fetch this speaker-filled truck of their own initiative, then, on their way to this critical task, while Negan and the other Saviors could be fighting for their lives against zombies, decided to stop in and do a little scavenging. They're a coincidence. Michonne and Rosita are driving up the road by coincidence and hear the music by coincidence, all so the writers could stage a fight inside the warehouse.

Earlier in the ep, Michonne had advised Rosita not to come with her. "You're still healing," she insisted, "You were shot. I was just beat up." When the warehouse fight breaks out, Michonne finds that, because of her injuries, using her sword is difficult for her, which can't help but remind viewers that Rick was shot in the same ep in which Michonne took that beating and he's been going, going, going all season while suffering no ill effects from it.[4] Rosita suffered no ill effects from her own gunshot wound tonight either. 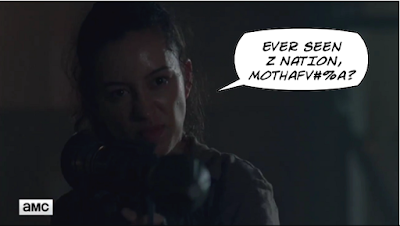 I've written quite a bit about how TWD has borrowed from Z NATION over the last few seasons and this particular fight has a Z NATION ending. As with so many of the other occasions in which TWD had aped ZN, these moments are by far the highlight of the ep. Rosita discovers a rocket-propelled grenade launcher in a box (!!!) and confronts one of the Saviors with it. She gives him a chance to surrender, he taunts her and she blasts him into atoms from a few feet away. Entirely impossible, of course, but HILARIOUS! The other Savior jumps in the speaker-filled truck and skedaddles but as Michonne and Rosita watch her disappearing down the road--and before one even recovers from the laughter that grenade-launcher scene just induced--we get the second very funny ZN moment, as a garbage truck suddenly appears out of nowhere, comes around the side of a building and completely crushes the vehicle. It turns out Daryl and Tara had also coincidentally decided to operate outside the Plan, had coincidentally been in the vicinity of this warehouse, which isn't on the main road,[5] coincidentally turned up just as that Savior was escaping and coincidentally slammed into the truck, though they couldn't have seen it until seconds before they hit it having no way of knowing who may be driving it! If anything makes TWD worth watching these days, it's these tone-purloined moments.

Daryl, Tara, Rosita and Michonne continue on to Negan's compound, Daryl talking about how they're going to "end this raht now," a call-back to his insistence in last week's ep that they could crack open the main building and let the dead stream in. Elsewhere in the ep, Carol herself sets out for some unknown, unPlanned personal mission to Negan's compound as well. She's interrupted and calls it off only because a kid from the Kingdom follows her--yes, they did that "don't follow me" scene yet again--and she has to take him back. Carl also went off on a non-Planned personal mission to find the fellow he'd seen in the opening ep. With war underway, he's looking to recruit this stranger into their community.

Anniversary Dept. - If one includes side pieces, FEAR THE WALKING DEAD reviews, etc., I've written more than a hundred articles on TWD over the years but I've always numbered my episode reviews and in that run, this one marks my 100th. So if you wanna' wear an Hawaiian shirt and jeans...

[1] This entire season has so far taken place over the course of a few hours' time; the first day ended with a night during the course of tonight's ep.

[2] Maggie, meanwhile, has been burdened by Jesus' decision to take a large number of Saviors prisoner. She builds a crude pen for them and Hilltop is now forced to once again feed them, the marauders who had terrorized the community, out of its own food. Immediately after Maggie says she won't tolerate any misbehavior by the prisoners, evil smirker Jared makes a dive for the pen's gate; rather than on-the-spot execution, all he gets is a slug to the face.

[3] This leads to a continuity error. When the two leave the Safe Zone, Michonne is driving--it's her trip--but when we cut back to them a few minutes later, Rosita is suddenly driving. Another such error occurs when Rick arrives at the Garbage People's landfill. When he knocks on the door, Jadis is sitting wearing nothing but some sort of smock (perhaps dreaming of an "after" with Rick?); he's escorted into her presence and she's suddenly fully dressed.

[4] The writers try to retcon that matter. Jadis shot Rick in the side but when Jadis mentions that she shot him, he says she only "grazed" him.

[5] When they'd gone to check out the noise, Michonne and Rosita had left their car in the middle of the road and Daryl and Tara could have come across it and been looking for them but this makes Daryl's swooping in and slamming into that truck even more inexplicable--for all he knew, Michonne or Rosita was driving it.