Some Guy, Some Cliché, Some WALKING DEAD

Recent installments of THE WALKING DEAD have, in the ham-handed way typical of the series, set up Ezekiel for a major fall. The King's bold and blatant displays of hubris seemed to signal his end was near and when "Some Guy," tonight's offering, opened with yet another, it looked as if his number was probably up. It wasn't though. In the end, he was able to hobble home but only as a greatly reduced "king" presiding over a greatly reduced Kingdom.

The Savior compound he and his men hit turned out to be the temporary residence of the big Browning machine-gun for which Rick has been searching. The Saviors put the weapon to work on the Kingdom's fighters, who were, at the time, in an open field, and wiped out the entire force. Ezekiel survived because several of his people had moved to shield him with their bodies; he had to crawl out from under what was left of them. This set up what could have been an extraordinarily ghoulish horror movie moment, as Ezekiel, with an injured leg that prevents him from immediately walking, is not only faced with the awful deaths of all of his beloved subjects but then has to try to crawl away from and over them as they begin to reanimate and pursue him for his flesh. Unfortunately, this is TWD, so that moment is entirely squandered by unimaginative direction and flat staging and editing, capped by the first of what will become many "surprise" last-minute saves in the ep.

In this first one, Ezekiel is about to become Zombie Chow when a random Kingdomite who somehow didn't die in the massacre suddenly arrives out of nowhere and announces his presence by shooting the menacing zombie bearing down on the King. This is, of course, one of the most overused clichés in action pictures, and it's the central preoccupation of this ep; in a little over 41 minutes of running time, it happens no less than five times. Ezekiel is saved from this zombie, his man Jerry rescues him from a Savior who had captured him, he and Jerry are saved from a zombie horde by Carol, Rick is saved from being machine-gunned by Daryl (a moment which, unlike any other action in the ep, is well-shot and edited) and finally, Ezekiel is again saved from a horde of zombies by his animated tiger Shiva. 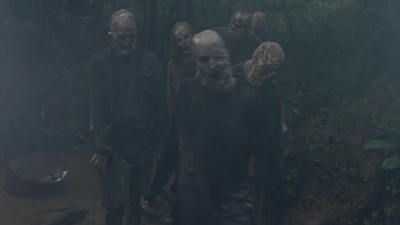 That last horde is TWD's latest swipe from Z NATION, a group of zombies grotesquely mutated by a swamp full of toxic waste in which they've been milling around! ZN revels in offering up all kinds of unusual zombies like this. These particular critters are utterly random. There's no reason at all for them to be there, except that they're cool. But sometimes, that should be reason enough. Definitely a nice touch. Fill in my usual comments about the best part of this show--and these toxic-waste zombies were unquestionably the highlight of the evening--being something it lifted from ZN.

There are plenty of stupid bits, as always. Ezekiel, attempting to flee from zombies, grabs up a rifle and instead of shooting the creatures with it, uses it like a crutch, repeatedly driving its barrel down into the mud beneath him. Then, he tries to shoot it. Fortunately for him, it seems to have randomly jammed while its previous owner still had it, so he's spared having its barrel explode in his face. Later, as zombies are closing in on he and Jerry, who have no guns and are up against a chained-up gate, he notices one of the zombies has a pistol its hip. Instead of grabbing it and shooting off the lock, he continues to fight the zombies with his sword and both nearly die before being saved by Carol. Rick's plot-armor--and, one suspects, the creators' lack of familiarity with the weapon they're featuring--saves him from being turned into instant Swiss cheese when the Saviors turn their machine-gun on him and the Jeep he's driving. Rick drives up right beside the Saviors' humvee and jumps into the cab while the driver watches, when all the driver had to do was swerve out of the way, hit the gas, hit the brakes--do literally anything--and Rick would have been road-pizza.[1] A pissed-off 500 lb. tiger is overcome and killed by a handful of zombies who not only had the physical weakness of the long-dead but were practically falling apart from exposure to that toxic waste. Carol announces she's almost out of ammo even as she continues firing full-auto bursts at the large number of zombies she's attempting to evade rather than dropping down to semi.[2] And so on. 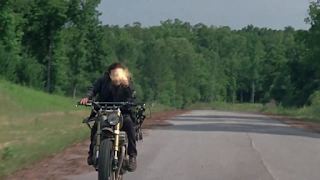 Despite how it markets itself, TWD has never really been a particularly action-packed series. Its stock-in-trade is tedious, wretchedly-paced one-line-item plot episodes wherein almost nothing happens. In recent weeks, the action quotient has been significantly amped up but we're now getting relatively action-packed eps that, paradoxically, manage to be pretty damn dull anyway. Go figure. One can't help but wonder how much of the season's budget is being burned up by all of this; it may well portend a very slow second half-season.

[1] Daryl's motorcycle has some interesting speed capabilities and limitations. Daryl was fired upon by the Savior in the hummer and crashed but he somehow recovers, gets back on his bike and catches up with the other vehicles in the chase, which should have been long gone by then. He gets there just in time to suddenly appear, shoot the gunner and save Rick (in a well-done little moment) but when Rick then jumps into the humvee and crashes it, Daryl, who should be right behind him, isn't even in sight and only drives up (from a substantial distance) after. It's possible Dwight's possession of the bike imbued it with some of the magic the Saviors have employed at various points, allowing Daryl to teleport in for the save then teleport back to his original position--far behind the chase and trying to catch up.

[2] At one point, Carol shoots it out with some Saviors, both she and they concealed behind some cars. As has been the case throughout this season, no one can hit one another, despite being at near-point-blank range using fully-automatic weapons, and the Saviors, who significantly outnumber Carol (at first) don't just go around the vehicle behind which she's crouched and shoot her, which would be easy to do. Instead--as has also been the case throughout this season--both she and they just pointlessly spray the bodies of the vehicles. Worthy of note--at least here in a footnote--is that one of the windows on the vehicle Carol is using for cover does break at one point (though it took some time). In previous eps, characters hid behind vehicles and threw an ungodly amount of lead--or was it cotton?--at one another without ever taking out windshields or windows.