The revamped BATTLESTAR GALACTICA from 2004 was, warts and all, one of the best tv series of its kind and from its first season to its last, its remarkably talented creative team always struggled to fit into a mere hour-long timeslot all the great material they'd cooked up. As great as a given episode would be, the deleted scenes would break your heart. "Damn," would begin my perpetual reaction upon seeing the cut material, "why couldn't they have gotten this into the show somehow?!" It was usually just cut for time. One wishes BSG had been allowed to exceed its allotted hour a lot more often than was the case. These days, THE WALKING DEAD is quite often given that liberty--eps routinely run five minutes, fifteen minutes, even half an hour beyond their regularly-designated allotment--but TWD is a show whose creators can barely even fill the regular hour they're contractually obligated to deliver. It has been one of the most filler-packed series television has ever seen and one of the real curiosities about its extended episodes is that virtually none of them[1] are jam-packed with lots of things happening that couldn't be cut without causing serious narrative harm. They tend, instead, to be the ones in which the least actually happens. That's the case with "The Big Scary U," tonight's installment, which pulls back from the more action-packed eps of the season to date to deliver what amounts to a glorified bottle episode that was nevertheless allowed to run for 75 minutes.

Tonight's a-plot takes place almost entirely at Negan's headquarters, now overrun by zombies. In a trailer outside the main compound, Negan and then Father Gabriel have taken shelter from the dead. That happened over a month ago and we haven't seen them since.[2] Back then, Gabriel dove into the trailer and Negan, who was already inside, announced his presence with his usual campy swagger. Gabriel was carrying a fully-automatic rifle, a pistol and a long knife but the force-field from the villain's plot-armor left him paralyzed and he did nothing, even as the villain threatened him. We rejoin the scene seconds later and Negan charges up to Gabriel, knocks him down and disarms him. The cold opening ends with a provocative notion; Gabriel suggests he's there to take Negan's confession. This set-up would have been an opportunity for the writers to try to humanize the awful cartoon they've made of this character. Unfortunately, they just take a pass. We learn merely that Negan once perhaps worked with children in some entirely unknown capacity and was married prior to the apocalypse. And we get to hear him do more of his usual posturing.

Rick and co. brought a small army to Negan's door at the beginning of this season. They had Negan and the entire Savior leadership in front of them at near point-blank range and with no cover and declined to simply kill the villains on sight. Gabriel didn't kill Negan when he dove into that trailer and had the opportunity. Later, when the writers have he and Negan remember the old cover-oneself-in-zombie-gore trick which will allow them to escape the trailer and walk unmolested among the dead,[3] Gabriel has a pistol he recovered from Negan. Again he doesn't shoot the guy. He even offers to give back the gun! And Negan allows him to keep it! Covered in grue, Gabriel could have plugged Negan and just walked home. Instead, he helps Negan get back into the main compound and becomes his prisoner.

A problem that has plagued TWD for most of its run--and that I've covered here over and over again--is how its writers make every progression of what passes for plot entirely dependent upon the characters being complete idiots with no sense of self-preservation. Even as the writers were giving Gabriel these further opportunities to take out Negan and having him decline to do so, they decided to further rub viewers' noses in the indefensible idiocy of this. Inside the main compound, there was much dissension among the Savior leaders; without Negan, they argue, jockey for position, challenge one another are are on the verge of completely falling apart and when the workers, kept in check by Negan's terror regime, begin to revolt, they're entirely incapable of dealing with the situation,[4] all of which just underscores how killing Negan would, to a large extent, solve the Savior problem. 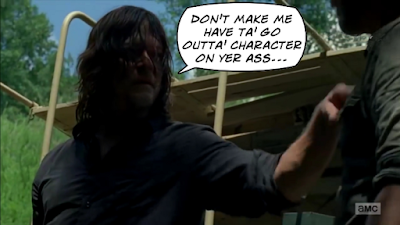 The b-plot is really only a few brief moments, basically a cameo by Rick and Daryl in which they're going through what's left of the Savior truck they crashed in their cameo appearance last week. Daryl recovers some dynamite and decides they should use it to blast open Negan's compound, let the dead flood in and "they'll surrender. It'll be done. Hell, we could end this by sundown." He's probably right but Rick is worried about the workers. What if doing this turns the workers against us? "There's a plan, he says, "and everyone is stickin' to it." Viewers have, of course, never been let in on this plan, so instead of this season being a suspenseful chess-game between our heroes and the Saviors, it's mostly just been a lot of random mayhem with little hint about what this unspoken "plan" is supposed to accomplish or how or what part anything we're being shown plays in it. Viewers have no information with which to judge its merits vs. Daryl's idea but Daryl must be unimpressed with it because he decides to go with his own. Rick vetoes it and Daryl physically attacks him! It's not a minor altercation either--Daryl tries to pound him into the ground and throws him in a choke-hold. Daryl calls Rick "brother" and Rick has been more of a brother to him than his own ever was. The two have been established as best pals, thick as thieves, absolutely loyal to one another, each willing to do anything for the other, Daryl being especially attached to Rick. The writers have done absolutely nothing to establish any foundation for this sort of sudden, extreme clash; it's just Daryl going violently out-of-character for the sake of adding a little action. Rick grabs the bag of dynamite and throws it in the burning truck, ending this stupid conflict by blowing up what, in a war situation, is a priceless asset.

That's it, another one-line-item plot--"Negan makes it back to the main Savior compound"--with a brief diversion that doesn't go anywhere. As Rick is walking up the road near the end,[5] a helicopter flies over, which is definitely the most interesting thing that happens.

[1] None at all come immediately to mind.

[2] Though the show has, of late, featured a lot more action than usual, the pace is still wretched. At the end of 5 eps, the season has only covered perhaps a few hours of time. Story threads and characters still completely disappear for long stretches.

[3] Since this gimmick was introduced--a carryover from the comic--the characters remember or forget it at the writers' convenience. Carol couldn't remember how to do it just last week. It also seems to work or not at the writer's convenience; tonight, it suddenly failed while Negan and Gabriel were in the midst of the dead.

[4] In fact, if Negan had returned to the main compound only two minutes later than he did, the workers would have probably liquidated the Savior leadership.

[5] Yes, in a wartime situation where the enemy could turn up at any second, Rick is just walking right up the road in the open.