No Time Like Time For After THE WALKING DEAD

THE WALKING DEAD continues to bog down in its own shortcomings. This evening's offering, "Time For After," was as full of holes as Clyde Barrow's stolen Ford and amounted to little more than a series of delaying actions aimed at getting events to the big 90-minute midseason finale next week. 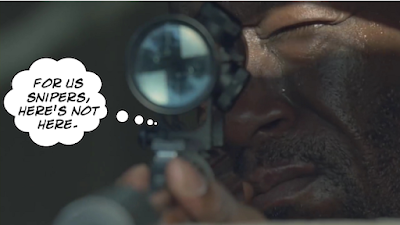 The crack sniper team the Alexandrians left posted around Negan's big Sanctuary seem to appear and disappear at the writers' convenience. They're supposed to be camped out in high places around the zombie-besieged compound in the event that any Saviors appear. Last week, we learned that at least two Saviors had been able to drive up to the place, survey what had happened there then peacefully drive away unmolested. Two weeks ago, Negan himself had walked across the yard in the open, fighting and even shooting zombies, but no sniper ever tried to plug him. Tonight when Daryl, Tara, Michonne and Rosita turned up in a garbage truck, they were immediately spotted by the sharpshooters and identified as friendlies but a little later, Eugene was able to walk right out on to the roof of the main building and stand there for an extended period without drawing any fire. And he was working on a remote-controlled glider that would play music and lure away the zombies.

Last week, I wrote about how the writers have had the characters insist there is, behind everything they've done this season, some big master Plan to defeat the Saviors but have entirely failed to share even a vague outline of that plan with viewers. Thus rather than a storyline wherein the characters pursue clearly-defined goals while the writers manipulate events as a means of generating suspense, it's mostly just been a lot of random mayhem to no obvious end. This was further complicated by the fact that Rick went off alone to the Garbage People, threatened them and was immediately taken prisoner when they turned down his insistence they join the anti-Savior team--definitely not an outcome he Planned--while multiple other characters went off on non-Planned missions of their own and no one was doing anything in accordance with any Plan. The failure to explain the Plan continues to cause problems tonight. Daryl, way off-Plan, has brought that garbage truck with the idea of driving it into the side of the compound and letting the zombies flood into the place. This, he insists, will force the Saviors to "surrender" but one gets the idea he just wants to kill them all. Morgan, who has recently joined the sniper-team, likes that idea just fine, as does Tara, who has been after blood for a while now. The writers try to set up some drama by presenting Rosita and Michonne as conflicted about this but it's impossible to generate any real dramatic tension because while Daryl's idea makes perfect sense and seems really obvious, Rick's Plan remains entirely unknown, leaving viewers with no basis for comparison.While Daryl makes a strong case for his approach--the Kingdom's entire fighting force has been wiped out and if the Saviors reverse their fortunes and decide to fight, our heroes don't have the numbers to beat them[1]--no one points to any downside to it and the other side of the story is entirely absent.

The writers skip over all of that and initially just make it all about Rick but this doesn't make any sense as a point of demarcation either. Rosita refuses to go along with Daryl on the grounds that "I believe in Rick Grimes." This is the same Rosita who spent all of last season going off-script at every turn--impatient, wanting to kill the enemy, disregarding the communities' plans and even her own life. Now, she chides Michonne for being impatient and not realizing that sometimes, you just have to sit and wait--their assigned place, for the moment, in Rick's Plan. "I just wish it didn't take Sasha walking out of that coffin for me to realize it," she huffs as she walks away, which makes no sense at all. Last season, Rosita and Sasha had gone to the Sanctuary with the aim of assassinating Negan. This was acknowledged by both to be a suicide mission but Rosita was left behind when Sasha locked her out of a gate at the last moment before mounting the attack. Sasha failed and would later die in Savior custody (a suicide, though no one knows that) then come "walking out of that coffin" as a zombie. There's no lesson in any of that to inform Rosita's actions tonight; it's just invoking an emotional moment as a substitute for any argument. Worse is what the writers did with Michonne. Last season, Michonne was telling Rick that after the war with the Saviors was over, he should be the one to lead the various communities forward to the future. Tonight, she was ready to completely disregard Rick's Plan for Daryl's. She later backed out at the last minute but with no Rick Plan on the table could offer no rationale for doing so. As a substitute, the writers turned to some of their patented speechifying, producing an unintentionally hilarious swamp of nonsense:

And she doesn't! But like Rosita, she doesn't try to talk Daryl out of it either. How could she? Exhorting Daryl to stick to Rick's Plan would require going through Rick's Plan. For that, Rick would have to have a Plan.

Daryl arrived at the compound at the end of the previous ep; the nonsense I've just outlined means this one is more than 2/3 over before he finally drives that truck through the wall.

Other items: The characters have always remembered or forgotten the old cover-yourself-in-zombie-grue trick at the writers' convenience. While it seems logical that one could get sick from using it, no one ever has. The writers have decided, rather late in the game after 8 years of seeing people use the trick, to address this; Gabriel may be on his death-bed after contracting some sort of infection in that manner.[2] He was sick at the end of last week's ep; he's still sick at the end of this one. Eugene is confronted by Dwight, who pointlessly confessed that he was helping Rick and co.[3] Eugene remains a coward who looks out for #1 and continues helping Negan even though his loyalties are somewhat divided--exactly where he was when the ep began and exactly where he's been since he switched sides. The Saviors fight the zombies that come flooding in after the truck crashes. They're nearly out of ammo and supplies. Eugene tells Negan he can make more bullets if he can acquire the machinery to do so but their situation seems pretty grim. Over in the landfill, the Garbage People seemed poised to feed Rick to a zombie when he breaks free, fights them, rips off the zombie's head (Z NATION!) and wrestles Jadis to the ground, finally securing her alliance with the other communities by threatening to let the zombie head eat her face. She wants him to pose for her to sculpt him as part of her fee for going along with this but he haggles her down. The outcome and the way it comes about makes it feel as if the entire business of refusing Rick and taking him prisoner was just thrown in to eat up screentime.

Rick and the Garbage People drive to the Sanctuary but only to see that the Saviors have been saved by that act of TWD's god known as the Inevitable Results of Defying Rick: the snipers are dead and the zombie horde that had surrounded the compound was gone.

The evening closed with a the midseason finale will feature a shocking scene about which everyone will be talking and I'm sure that's exactly what will happen.

[1] Though, it should be noted, this is a questionable conclusion. While the Kingdom's force was wiped out, the Saviors' manpower should have been pretty seriously depleted by what's happened so far this season.

[2] It doesn't make any sense to throw this in now. We've not only seen characters covering themselves in zombie grue for 8 years--Rick did it the first time when he had a gunshot wound in his side--we've also seen countless other occasions when characters have gotten zombie gore in their eyes and even their mouths and have been entirely unaffected.

[3] Eugene, who was recording himself just before this, may have a tape of the confession. Nothing was made of this, which means it's unlikely anything ever will be. Eugene was prepared to tell Negan about Dwight but backed out.