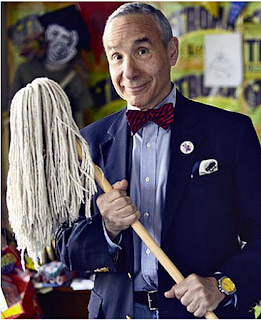 Born today, 30 Dec., in 1945, Lloyd Kaufman, producer, writer, director, the co-founder of Troma Entertainment and one of the magnificent bastards responsible for, among so many other off-the-wall classics, the Toxic Avenger movies, POULTRYGEIST: NIGHT OF THE CHICKEN DEAD, TERROR FIRMER, TROMA'S WAR and TROMEO & JULIET. Highbrow snobs may scoff at Lloyd's shoestring productions, with their abundance of bodily fluids, breasts, beasts and lowbrow humor, but for all these stiff-necked snoots' very tasteful tsk-tsk-ing, Lloyd is something they can't touch, something one doesn't often find in the picture business or, indeed, in life: a genuine original. In a milieu abundantly populated by painfully unimaginative knock-off artists, Lloyd makes movies that aren't like anything you've ever seen. He's borne the spirit of indie cinema through a lot of years when it seemed in danger of being snuffed out entirely. One hopes he will continue to do so for many more to come.