Deadlier and more prolific than the zombie virus, the Stupids continued to plague THE WALKING DEAD tonight. Simon leads the Saviors to attack Hilltop with no guns, just a few bows and a bunch of melee weapons. Last week, regarding this plan, I asked,

"How, exactly, are the Saviors, who are supposed to be getting low on ammo, ever going to get close enough to cut people barricaded in a walled fortress on a, yes, hilltop, particularly given that those people have guns--fully automatic weapons--to keep any attackers well at bay?"

Tonight, we got the answer: Hilltop, infected by the Stupids, just opens the gate and lets the Saviors in. When the Savior force arrives at its objective, some spike-strips placed on the road take out the tires on their lead vehicles, so they stop within easy range of the fortress to remove these obstacles. It's dark but they're lit by their own headlines--sitting ducks--yet the Hilltoppers don't fire on them, just lets them mill about. At this point, they can be turned to Swiss cheese before they even get to the gate--there's absolutely no way they're getting inside, and no way they can lay siege to the place either. If they stay there, they can be shot down at Hilltop's leisure. They've brought knives to a gunfight and that's that. Fortunately for them--and for the ep's running time--the writers haven't yet filled their contractually-obligated quota of moments during the season when Daryl is supposed to be made to look cool. Returning from lookout duty on his motorcycle, Daryl drives right through the middle of the enemy force, shooting them down as he goes. Hilltop opens the gates to let him in and just lets the Saviors roll right on through too. 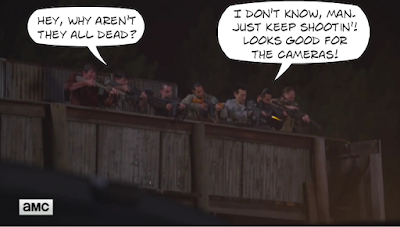 As embarrassingly Stupid as this looks, it gets instantly worse: it turns out this was Maggie's plan all along. She has people waiting to ambush them as they come in.[1] The Hilltoppers, who probably outnumber the Saviors, are armed with fully-automatic weapons. Only on TWD can this be anything other than a one-sided massacre that lasts a few seconds but, the Spirit of Stupid having descended, the Saviors somehow make a hard fight of it. At one point, Hilltop's defenders are even forced to retreat into their Big House. The Saviors approach the house by walking straight up through the yard, right in the open with no cover. Hilltop is waiting--they light the yard and open up on them from the windows. Again, something that should be a one-sided massacre (when, earlier in the season, the Kingdom's forces were caught in a similar situation facing only one machine gun, they were all killed). The Saviors are sent fleeing toward the front gate but just at that moment, Rick arrives with the rest of the lookouts and the Saviors are caught with guns at their backs, guns at their front and no avenue of escape.

Well, no, because maybe half a dozen Saviors just dive behind the Hilltop defensive wall on one side of the gateway. The returning lookouts, who are within spitting distance and couldn't possibly have missed this maneuver, just walk right past them. The Saviors run out the gate, get in a pair of vehicles and drive away. Rick and Maggie shoot at them as they flee but neither Rick nor Maggie nor anyone else jumps in vehicles, runs them down and finishes them off. Hey, there are still three more episodes to fill.[2]

Still, nearly the entire Savior fighting force was wiped out. Throughout this season, the Saviors have displayed a remarkable respawning ability; regenerating at the whim of the writers. The attacks on their outposts in the first half of the season should have reduced their numbers to the point that they didn't have the manpower to cause all the trouble they have since. In these last two eps, the Saviors threw their remaining fighters at Hilltop and lost badly. This should be the end of the war, an ordeal that has dragged on for two and a half seasons now, but there's no acknowledgement of this by anyone, no cheering, no celebrating. The tone remains as dreary as ever. Carol and Tobin have one of those cliche conversations about what Carol will do after the war in over, as if it wasn't. To get in some mixed signals, Rick takes the boards off the window of the Hilltop Big House, as if it is over.

In the night, the Stupids come again. The Saviors' weapons were coated in zombie grue and everyone they cut begins to zombify, rising from their beds and going off in search of people to eat. They growl and grunt and are none too quiet but even as they start killing people, their noise doesn't disturb the sleep of anyone.[3] One of them even falls down the very long staircase in the Big House with what looks like most of Hilltop's population sleeping at the bottom. No one so much as stirs.

The zombies who are in the medical trailers have to cross the yard and get inside the house to cause their mayhem. They're able to do so because yet again, Hilltop has no watchmen posted. This was an issue last season, when the lack of watchmen meant the Saviors were able to wreak all sorts of impossible havoc on Hilltop's grounds, and, as usual, our heroes haven't learned a thing since. With a war that may still be ongoing and a pen of dangerous prisoners in the yard, there isn't a single guard on duty, no one keeping a watch.

Speaking of those prisoners, they're in a crude, hastily-constructed pen. Anyone in it could easily slip out of it. They've only credibly remained there because of the presence of guards, which makes the complete absence of guards here even more egregious. As the zombies begin to rise, the brat Henry goes down to the prisoner pen with a rifle and demands to know which of the Saviors there killed his brother. Last week, Morgan told him the now-deceased Gavin had done so and there's no reason the boy wouldn't believe that but the Stupids are upon him too; he drops in on the prisoners and threatens to begin randomly shooting them if they don't identify the murderer. Henry can do this from outside the pen just fine but even as audible mayhem erupts in the house, the boy, who doesn't seem terribly interested in what may be happening to his friends inside, unlocks the pen and steps into it. As could be expected, he's then easily tackled and many of the Saviors escape.

As with the previous ep, the Stupids claimed everything this week.

[1] Throughout TWD, Rick has been presented as an absolutely wretched leader but because the writers have wanted him to remain the leader, they've compensated by having all the characters gratuitously praise his leadership. Tonight, they did the same with Maggie. There's no way to characterize her plan for unnecessarily allowing the Saviors inside her fortress as anything other than utterly idiotic, a thing that got people needlessly killed, so the writers have multiple characters come up to her after the fight to praise her great leadership skills, to the point that it begins to look really awkward.

[2] During the course of the fighting, Savior turncoat Dwight, who wants to help our heroes win, is running around behind Simon conspicuously failing to kill him or even trying to do so, for no reason other than that the writers decree it. Both he and Simon are with the small group who escape.

[3] Except for one fellow who, assigned the duty of watching over two seriously wounded people in a world in which people who die return as flesh-eating monsters, lays down between them and goes to sleep.