I've been a fan of THE WALKING DEAD's Garbage People from pretty much the moment they were introduced. After their first appearance, I wrote:

"Tonight, on THE WALKING DEAD, Rick and co. appeared to have dropped into the pocket universe wherein the Max Max flicks are set; where characters with weird names and inexpressive faces dressed in black and grey Max Max-like gear stand around and speak through a monotone in clipped, half-sentences as if they've grown up in the aftermath of the nuclear apocalypse and regular conversation is strange to them. Their home is a maze of piled-up car-wrecks and trash that stretches to the horizon--with the whole world at their disposal for residences, they're mindful enough of the series' desire for visuals to live there--and they interact with our heroes while in the distance, a rusty car-door blown by the eternal winds of the wastelands atmospherically squonks away. I never noticed a crow cawing at any point--perhaps an oversight."

Seemingly born of the writers' exposure to Z NATION, the Garbage People didn't make a lick of sense in the context of TWD's world, but they were entertaining, through a time when little else about the series has been, an odd, unpredictable element that felt like something phasing into TWD from a different--and better--show. Given my usually less-than-stellar estimation of TWD's writers. I can't really say it's any surprise that they apparently didn't understand what a good thing they had with this community. In the only meaningful development in "The Lost & the Plunderers," tonight's installment, they liquidated it. 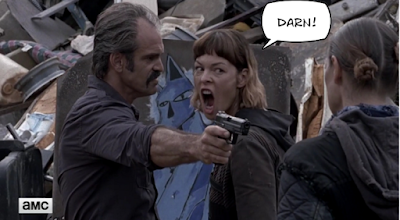 That dreadful decision began with a conflict between Simon, who wants to be the big boss of the Saviors, and Negan, who is the big boss. Simon just wants to kill off all these rebellious communities and move on with life but, in a sequence that runs several times longer than was necessary, Negan insists they're still a resource. He and Simon argue and he orders Simon to bring to heel the Garbage People, who briefly joined the rebellion. But once at the Big Dump, Simon, still smarting over Negan's tongue-lashing, gets a little too ambitious and starts shooting people. When Jadis, the Garbage Queen, slugs him, he gives the order and the Saviors kill everyone. Negan will probably be just as pleased by this as I was.[1]

A lot of the screentime devoted to Rick and Michonne here is just filler material. Near the beginning, they're packing up and about to depart from the Safe Zone, which has been torn up by the Saviors, and Michonne gets it in her head that, before she leaves, she simply must go put out the fire that is consuming a gazebo, so she and Rick charge into action, risking their lives in battle against zombies in order to waste two of the only fire-extinguishers left in the world trying, for no real reason, to put out the blaze on a structure that has already mostly burned up.

Later, they turn up at the Big Dump and find the zombified Garbagers. Only Jadis is left. She's distraught and, in a development that makes no more sense than the community itself, suddenly remembers how to speak proper English, as if all that Mad Maxian stuff was just a put-on. Given that she had been allied with Rick and had just seen all of her friends and family wiped out by their common enemy because of that alliance, one would think Rick would have a great deal of sympathy but instead, he's openly hostile--tells Jadis this is all her fault, refuses to help her escape, even points his gun at her when she's fighting through zombies while trying to follow him out--shoots over her head as a warning. If this ep was the story of the end of the Garbage People told from Jadis' perspective, Rick could fill the role of the ghost of her guilt as leader for the death of her people. As it is though, she's just an element in Simon's story then Rick's, and Rick's behavior is just more random and bizarre shit, as if he's this thing entirely disconnected from what we've seen him experience[3] and who we've seen him be.[4]

The ep only ever adopts Jadis' point of view when she has to see to the disposition of the walking dead who were once her friends. In what could, in better hands, have been a most remarkable scene--and in these hands still stands out as fairly striking for TWD--she leads the dead into an industrial shredder, watching with sad resignation as, one by one, they drop into the machine and are ground up into gory oatmeal that runs out on a conveyor belt beside her final painting--a fine, arty touch on paper that doesn't really come off as well on screen.

The ep checks in on Aaron and Enid, who, in a random sequence inserted into an earlier ep, went off to find the Oceanside community, were attacked, killed Oceanside's matron leader and were captured. Tonight, they're chained, about to be executed, Enid makes a speech and the new leader, the granddaughter of the dead one, just decides to let them go. As they're leaving, Aaron decides he's going to go back and convince them to join the fight--the reason Aaron went there in the first place--which makes one wonder what has been the point of anything that has happened with this thread. Aaron will try to make his case, Oceanside will listen or it won't--nothing shown tonight added anything to this except running time. With TWD though, that's often all it takes.

Near the end, Rick talks to Negan over a purloined radio, tells him Coral is dead. Rick says he's going to kill Negan, Negan says Coral is dead because Rick failed him. In the Walking Dead comics, Negan and Carl developed an interesting relationship that would have made a scene like this very interesting but that was almost entirely cut from the series and the scene, lacking any real dramatic weight, just plays out as Negan being the villain and taunting the hero.

[1] During his interrogation of Jadis, Simon suddenly mentions a helipad and solar panels on the landfill grounds, things never before mentioned. Rick saw a helicopter flying over a few eps ago and when Jadis does away with the Garbage-ite dead, she has electricity to do it. Simon hints that the site may have been something much more than just a garbage dump before the end of the world but later, Jadis seems to explain living there as strictly an artistic choice. The helipad will probably turn up again but the electricity may have been introduced merely to allow Jadis to carry out that zombie-killing sequence.

[2] Though with a war on and all, one would expect the Saviors would be out looking for the Safe Zone gang, they don't seem to be doing so. Rick seems to take out a Savior in the Safe Zone near the beginning--it happens off camera--and it makes sense someone would be posted there to see if anyone returned but he was apparently all alone and Rick and Michonne are able to drive the road unmolested and without even encountering any Savior lookouts. Near the end of the ep, we learn that Negan hasn't heard from Gavin's crew at the Kingdom. They've all been killed, of course, but that happened the night before and no one, it seems, has checked on them.

[3] And this would stand out even to someone who had only ever seen the last two eps of TWD--Coral had just given Rick the we've-got-to-do-better-about-holding-on-to-our-humanity speech as some of his dying words in the ep prior.

[4] It doesn't help matters that the writers throw in a later scene wherein Michonne is giving Rick the eye for this behavior and he tells her he just wanted Jadis to go away.