The Key To THE WALKING DEAD Is the Stupids

Tonight on THE WALKING DEAD, everyone got stupid. That's nothing new, of course. TWD's writers have made nearly every inch of plot progression in the bulk of the show's run entirely dependent upon and occurring as a consequence of the characters being stupid. Typically not just run-of-the-mill stupid; we're talking profound cretinism so beyond the bounds of credible as to constitute an open, ongoing insult to and mockery of viewers. No one is this Stupid, and no one so unfailingly, relentlessly Stupid would survive very long in a zombie apocalypse. There are other problems with "The Key," tonight's installment, but this is the one that towers over all others. 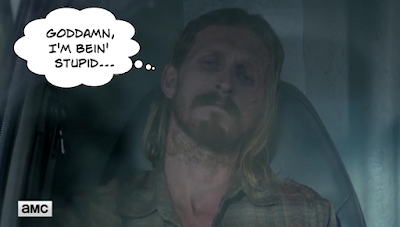 Savior turncoat Dwight has cast his lot with our heroes. He's accepted that he'll be dead with the current war is over but he wants to help them win before he goes out. Last week, he was forced to return to the Savior fold to protect the denizens of the Safe Zone. A few eps ago, Dwight intentionally led his group of Saviors into an ambush and helped the Alexandrians kill them all, but one, a woman who witnessed his treachery, got away. When he went back to the Saviors last week, he learned that she is still missing in action but he has to figure she's going to turn up at any moment, and then it will be curtains for him. As tonight's ep opens, he's back at his apartment at the Sanctuary and the Stupids kick in really hard; Negan comes to visit him and Dwight doesn't assassinate the villain on sight. He doesn't do it while Negan stands around jawing. Negan is alone and would never see it coming but Dwight let's him talk for a while then leave in peace. Another victory for Negan's plot immunity and not even the only one this evening.

Negan's forces are going to attack Hilltop and Negan has come up with the idea of coating their melee weapons in walker grue in the hope that those cut by them will then die and zombify,[1] so there's a sequence of the Saviors cutting up zombies and getting their knives and axes good and gooey. It's an idea that came from the comics but there, guns and ammo were, by this point, a lot more scarce and fighting with such weapons much more common. Simon barks Negan's orders to the troops: cut some of 'em and make 'em turn but don't kill them all--they're going to go back to work for us when this is over. How, exactly, are the Saviors, who are supposed to be getting low on ammo, ever going to get close enough to cut people barricaded in a walled fortress on a, yes, hilltop, particularly given that those people have guns--fully automatic weapons--to keep any attackers well at bay? 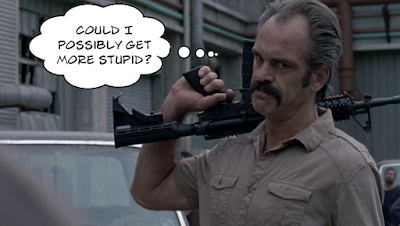 Simon has a bad case of the Stupids too. Contrary to Negan's direct orders, he has genocided the Garbage People then lied to Negan about it. His situation is less ambiguous than Dwight's missing witness--when it comes to Negan discovering the truth, it's just a matter of when, not if.[2] He wants Negan gone and wants to lead the Saviors himself and his big idea is to simply wipe out our heroes. Kill off the rebel communities and move on. But from everything we've seen, the Saviors are very heavily dependent upon their subjugated communities for food and supplies; it's the very reason Negan continues to argue for a measured response. The Saviors are thugs whose loyalty is partially purchased via the apocalyptic version of a luxurious lifestyle this arrangement provides them. Simon is proposing wiping out the lower caste in this carefully-organized caste-system without any replacement. 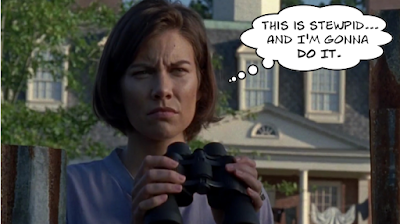 Back at Hilltop, our heroes have gathered and are preparing for the Saviors' coming siege. Maggie spies some crates in a field, checks them out and finds a note promising a "key to the future" if she'll fill the crates with food or "phonograph records"[3] and bring them to a designated rendezvous. It sounds like a rather obvious trap but Michonne immediately dismisses the idea that it could be the Saviors solely on the grounds that it isn't dramatic enough for them. At first, Maggie is clear-headed on the matter: "If someone is tryin' ta' help us and we miss out, we miss out. If someone is tryin' ta' kill us, we die." Maggie is the leader of the community and given the circumstances, this is a no-brainer, but Michonne works on her for a few minutes and astonishingly, with a Savior attack imminent, she opts to take Michonne and Rosita--two of their best fighters--and leave Hilltop for this meeting with  who-knows who!

It turns out there really is a benevolent benefactor behind this[4] but there's no reason it couldn't have been a Savior ambush. How stupid are the Saviors if they can't easily overcome people this stupid?

Rick puts in a turn on lookout duty, watching the roads for any approaching Savior activity and--can you believe the coincidence?--he ends up watching the very road Negan's forces are taking. He sees their convoy, sees Negan bringing up the rear and starts to give the signal to alert his own people of the enemy presence then decides, instead, to leave them in the dark about the approaching danger, jump in his vehicle and launch a hopeless solo attack on Negan's car that somewhat succeeds and doesn't get Rick killed solely because the writers decree it. 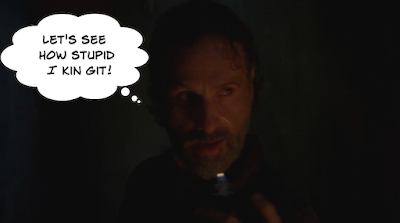 Negan has a large, open bucket of zombie grue in his front seat with his pet bat Lucille marinating in it. Apparently, Rick rather spectacularly t-boned the villain's car, smashing it and sending it flipping until it landed on its side but there doesn't seem to have been the budget to shoot such a thing--we only see Negan fleeing, Rick in pursuit, a cutaway to the other Saviors then the aftermath of what looks like a hell of a crash. Negan would probably be pretty banged up and all that zombie grue is all over him and the interior of the car but his plot armor saves him again. Rick has an automatic weapon but instead of charging in and killing Negan, he just starts ineffectually pumping rounds into the bottom of the overturned vehicle, allowing Negan to escape into a nearby building. Rick is close behind but throws away his rifle before entering! He then draws and empties his pistol, missing every time. Hearing the hammer click on an empty chamber, Negan, who has climbed a flight of stairs, turns to mock Rick--all outta' ammo now! Negan is far out of reach and Rick could easily just reload but instead, he puts the pistol away, pulls out an axe he had tucked in belt and... throws it away. He actually throws it with the intent of hitting Negan and misses but why in hell would anyone do that instead of just advancing up the stairs and taking the guy apart?

This ridiculous nonsense goes on for a while--the two end up in a dark basement talking smack to one another, fighting some zombies then escaping the building without ever causing each other any harm.[5] Negan, in an amusing twist, is captured by Jaydis of the Garbage People.

Meanwhile, Simon is salivating over this being his opportunity. He'd been trying, in a roundabout way, to recruit Dwight to his cause. When Rick attacks Negan's car, Simon bottles up the Saviors in an alley, tells them this could be a trap--in which case bottling them up in an alley in which they could be fired upon from buildings on both sides is just about the worst possible idea--and that they should set up a perimeter while he and Dwight will go see if Negan needs a hand. Comically nonchalant about the whole thing. Dwight and Simon come upon Negan's smashed up car. Negan could be hurt or dead somewhere nearby, they could kill him without being observed but instead of looking for him, and despite the consequences that will befall them if, as is likely, he turns up, they just decide to write him off. Simon goes back to the Saviors and tells them that after this attack on their leader, they should go to Hilltop and kill everyone. Despite the obvious consequences of such an act, they think this is a great idea.

And that was "The Key." Dumbassery and Decay and the Stupids held illimitable dominion over all.

[1] This line of thought emerged when the writers, 7 1/2 seasons into the show, suddenly changed the rules and made zombie grue toxic, making Father Gabriel get very sick from covering himself in it. It makes sense that it would be toxic, of course, but the long run of TWD has seen countless characters--even characters with open wounds--absolutely covered in zombie gore, their faces and eyes spattered with it, etc. and no one has ever gotten the least bit sick from it. While Negan thinks people will get die and zombify from wounds from treated weapons, Gabriel himself didn't and, treated with antibiotics, seems on the road to recovery, other than having lost a lot of his eyesight. Negan, of course, knows this: Gabriel is his prisoner.

[3] I'm old enough that it sounds weird for someone to call records that.

[4] It's a bizarre--and very Z NATION--fairy-tale character named Georgie who promises knowledge in exchange for music. She offers a collection of schematics for windmills, watermills, aqueducts, etc.--what she describes as "a book of Medieval achievement, so that we may have a future from our past." She says she will one day return and when she does, she'd better see great things. A glimpse, perhaps, at the ultimate end of the series?

[5] At one point, Rick does bash Negan with his own zombie-infected barbed-wire-wrapped bat but Rick was kind enough to set it on fire beforehand, presumably cauterizing it and leaving Negan non-infected.