At 100, THE WALKING DEAD Needs Mercy

Tonight's season 8 kick-off of THE WALKING DEAD also marked the series' 100th episode and the heavy promotion given that fact by AMC in the lead-up to it suggested the creators were planning something special. It was certainly the time for it. Last season, our heroes and the Saviors declared all-out war on one another. Unfortunately, TWD has been running on fumes for several seasons now and the only "something special" its creators could manage was to turn an all-out war into a moronic exercise in tedium.

As last season had ended, the combined forces of our heroes had decimated the Savior contingent Negan had brought to subjugate the Safe Zone. Negan used his plot immunity to escape. Though he made his exit in a lumbering military vehicle and was hours from his home base, Rick thought it was more important to have a weepy moment with Michonne than to send fighters in vehicles to run down and capture/kill the villain. It isn't clear how much time has passed between this and tonight's installment but it is clear the writers are showing their traditional disregard for this critical element. Maggie is pregnant. She first revealed she knew this at the time of Glenn's fake dumpster-dive "death," way back in the middle of season 6. After our heroes took out the dead that had invaded the Safe Zone that season, there was a period during which they cleaned up and rebuilt. Dialogue implied it had been a month. Upon the subsequent introduction of the Hilltop community, the Hilltop doctor gave Maggie a transabdominal ultrasound, something that would only work if she was 8 weeks along or more. At the end of that season, she suffered a serious complication and the effort to get her to the doctor at Hilltop led to our heroes' first encounter with Negan. That complication was later diagnosed as a placental abruption, a condition that can only occur after 20 weeks of pregnancy (and typically happens much later). At this same time, Carol, who had left the Safe Zone, was shot to pieces--multiple gunshot wounds. It would be a minimum of 5 or 6 weeks before she would recover from such injuries, probably significantly more. She did recover, convalescing at the Kingdom, then, when healed, spent x amount of time living alone outside the community, basically written out of the story. In the middle of that season, Aaron took an incredibly vicious beating by the Saviors that could have killed him and probably should have. It would have been another 4-6 weeks before he would have been fully operational again. Then in the last few minutes of season 7, Rick was shot. But tonight, he's fully recovered--another 5 or 6 weeks.[1] Maggie's pregnancy should have been quite visible since at least 12 weeks in and by tonight's ep, she should be ready to pop but instead, she still isn't even showing. And she even made a joke about her pregnancy--"They say you can wage war through the second trimester."

A 5-or-6-week gap between the seasons is problematic in other ways. In his previous appearance, Negan was shown to have assembled his forces and told them they were going to war. Now, we're to believe it's been that long and not only has he entirely failed to go to war, he was so unprepared that he was caught with his pant's down by even one of Rick's idiotic schemes. 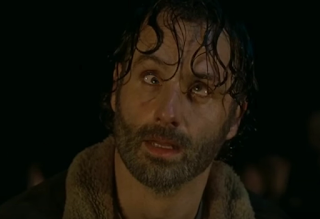 Rick's big plans are... well, you've seen the show--you know. This one was a mess of both the writing and the staging. Daryl is able to get a list of all of the guard outposts around Negan's compound. He gets it from Dwight. They tie messages on arrows and shoot them back and forth to one another over what's made to look like only a few feet of distance, like some POLICE SQUAD joke. Rick and co. take out the guards, rig some explosives to prevent any reinforcements from getting in then just drive some cars with metal plates on them right into the Saviors' compound and up to Negan's headquarters, circling them to form a defensive perimeter right in front of a building that is probably 20 stories high. That's Rick, the screen general who tries to deliver a rousing speech,[2] draws his saber then boldly leads his forces to take the low ground. The Saviors could sit in any one of their seeming infinity of widows and pick them off  like fish in a barrel. It's already been established that the Saviors have all kinds of explosives. A few grenades (or pretty much any explosive) chucked down into that little nest--something that could have been done by the Saviors inside with no danger to themselves--and it would have been all over for our heroes, not just the end of the operation but of the leaders of all three communities, all of whom were present on the ground. That's how bad Rick's plan was.

A gunshot in the air signals our heroes' presence and--wouldn't you know it?--the first guy to stick his head out the door is none other than Negan himself. The series has established that the Saviors, who are mostly dimwits and bullies, are basically a personality-cult built around their leader. More specifically, fear of their leader, who steals their wives and maims and murders them for transgressions. When Negan steps out, there are dozens of people with guns on him and ending the problem of the Saviors is probably as simple a matter as putting a bullet in him. There's no way around this. Even if, like Rick, one foolishly wants to try to make some kind of peace with his lieutenants, killing him is the first step. No scenario for where to proceed doesn't begin with that. And if, afterwards, those lieutenants won't play ball, they're all dumb enough to have followed him out of the building and into plain gun-sight and can also be liquidated on the spot. They're all there in a line, the entire Savior command structure. There's no rationale for doing anything except killing Negan on sight but impossibly, no one does it. Instead, we get several minutes of  his usual smiles and wisecracks and campy, way-over-the-top villainy, as he postures away about how his dick is bigger, how Rick doesn't know what's about to happen and even threatens Rick and co. with death without eliciting a bullet. The television incarnation of Negan is a one-trick pony and this is the trick. We've already seen it over and over again--by now, it makes for very dull television and when Negan isn't being killed any second of any one of the minutes he's prancing around like this, very bad television too.

Rick eventually opens fire on Negan but though he's aiming right at the man at near-point-blank range with a fully automatic weapon, the villain's plot-armor proves too much. That armor apparently projects a powerful forcefield as well, as none of Negan's underlings are killed either. In fact, even though a big shootout erupts, no one on either side is killed in it. It's as if the cache from which they all drew their weapons was left over from THE A-TEAM. Our heroes waste a lot of what should be very precious ammo, mostly spraying the buildings' windows, then hop in their cars and skedaddle, while Daryl leads a herd of zombies onto the grounds,[3] something that could have been done without putting any fighters inside the compound and at risk.

Before the shooting started, Negan had Gregory, the cowardly former leader of Hilltop, try to get the Hilltopians to stand down, which goes about as well as could be expected. A little later, when everyone is escaping, Father Gabriel, one of the least useful castmembers, sees Gregory in distress and tries to rescue him. For his trouble, Gregory steals his car and leaves him behind in the midst of an advancing zombie horde. Gabriel ducks into a trailer in the yard--the same trailer, it turns out, in which Negan had, only moments earlier, taken refuge. Negan emerges from the darkness, alone nad unarmed but with a grin and some threatening words and Gabriel, who is carrying a fully-automatic rifle, becomes the last person in the ep who can kill Negan but for no reason at all doesn't.

As is TWD's custom, the ep featured an extraordinary amount of filler. The pacing is terrible, there's no tightness in the editing, practically every scene long overstays its welcome. Items like apparent fantasy sequences showing Rick as an older man and a series of scenes in which Coral encounters some crazy fellow at a gas-station[4] are present just to eat up running time. Fill in my usual SMH sentiment about the fact that this is yet another ep that couldn't even fill its allotted hour yet was still allowed to exceed its scheduled running-time by five minutes.

The "war" looks as if it's going to continue--more Savior outposts to hit, probably at just as glacial a pace and with as few consequences. In its last few seasons, TWD's only bright moments came when it was ripping off the spirit of Z NATION, the vastly superior zombie apocalypse on SyFy. Tonight's ep (which featured barely a hint of ZN)[5] was called "Mercy." On ZN, to "mercy" someone is to put them down after they've died and zombified. TWD has needed that kind of mercy for several seasons now.

[1] This reconstruction, of course, allows for, among other things, reasonable healing times and actual human prenatal development. A timelin is one of the most basic elements of competent narrative construction but it's also something TWD's writers have never been able to manage. They had, for example, Carol leave the Kingdom shortly after she arrived. They'll do enough research to learn what a placental abruption is but not enough to learn when such a thing actually happens.

[2] The ep in fact opens with Rick delivering one of his awful speeches, the usual TWD-patented trite sentiment that's meant to sound noble and stirring. The writers have recycled this so many times that Lincoln could probably deliver it without a script.

[3] Daryl was leading the zombies with on his motorcycle but driving along at a slow pace, as he did when leading the zombie herd in season 6, was apparently judged to be insignificantly dramatic--it's being intercut with the events inside the Saviors' compound--so he's shown gunning the engine and riding it far faster than slow-shuffling zombies could possibly follow. Yet they're able to follow him anyway.

[4] Rick drives the fellow away with gunshots. Coral looks unkindly on this. Rick thinks the man could be a Savior lookout but, being the brilliant leader he is, lets him run away anyway, right on the verge of the assault on the Savior compound.

[5] In the fantasy sequences/flash forwards/whatever-they-are--Rick seems to be experiencing them in the present--the world is a lot brighter, a lot more dreamlike and there's always Weird Al in the air. It's a small nod but it counts.