The Damned WALKING DEAD... With Pictures!

There was a lot of shooting tonight on "The Damned," this week's installment of THE WALKING DEAD, but for all that sound, fury and fully-automatic gunfire, not a lot of clarity and, this being TWD, not a lot of logic either.

Our heroes' "all-out war" against the Saviors continues, with a number divided into teams who are tasked with hitting various Savior compounds in different locations. Unlike last week, the ep is very fast-paced but the action is, for the most part, very badly shot and edited. While there seems to be some overarching plan at work and definite mission objectives, the writers never let the audience in on either, so instead of a script that establishes a set of goals and builds suspense around how and if our heroes can achieve them, as would be appropriate to make an ep of this sort work, it's all just mayhem. Heroes and Saviors crash into one another--sounds a bit like SURVIVOR, doesn't it?--then needlessly burn through incredible amounts of ammo.

A team from the Kingdom including Ezekiel and Carol are on foot and heading to the site they're supposed to attack, while another featuring Morgan, Tara and Jesus are supposed to hit a different compound, the one Rick and co. hit after first encountering the Saviors back in season 6. In both cases, the characters stress the need to be stealthy, which would make sense if these attacks were timed to occur simultaneously with the operation against Negan's headquarters in the last ep but makes absolutely none in the aftermath of that event. It's been established since shortly after the Saviors first appeared that they use radios and satellite phones to communicate. They've even, on occasion, employed magic to accomplish impossible tasks, including teleporting from one location to another. After the attack on Negan's hq, there's no more reason to assume the Saviors won't know they're coming than there is logic in the Saviors not knowing they're coming. When Morgan and co. are scanning their target, Jesus says, "If they see us, if they fire a gun, we're not getting in."[1] Ezekiel and his team, meanwhile, are on foot and heading for their objective when they encounter a lone Savior who ducks behind a car and instead of someone just flanking him and shooting him, twenty people plant their feet and open up on the car with fully-automatic weapons, a clamor that would be heard for many miles around. Then they just as loudly wipe out a horde of zombies. The Savior still escapes, and Carol delivers the punchline: "If he tells them we're here, it's over before it started." And if the audience didn't get the point (or have enough of a laugh), she repeats this sentiment a little later.

Rick's team is attacking another facility. One group shoots it out with the Saviors in the yard while Rick, Daryl and several other men slip in through a different entrance. As we eventually learn, they're in search of a cache of guns that are supposed to be on the 4th floor. From the fact that they're mounting an operation of this scale to acquire it, we can assume it's supposed to be a big cache of guns but Rick and Daryl leave the rest of their group behind in order to climb to the 4th through an elevator shaft. Presumably, the two are going to find some room packed with weapons then somehow carry them down all by themselves.

The shootout that rages in front of this same building offers some of the worst staged and edited action in TWD's run. Perhaps for budgetary reasons, the two sides are shooting at one another from very close quarters, the sort of combat that, using military-grade weapons, would be over very quickly but here is prolonged merely because the script says so. I've put together some screen grabs to illustrate. The fellow in the foreground with the rifle just can't seem to hit that bald guy: 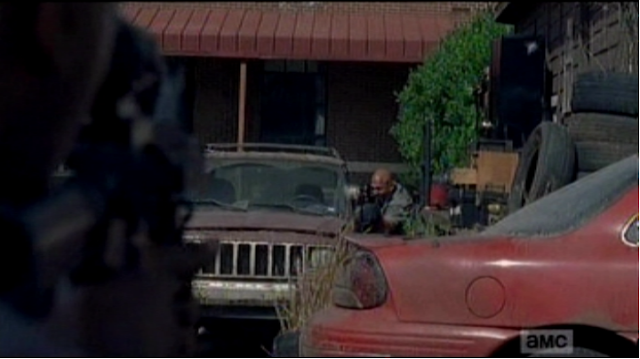 The guy at the lower right can't take out this fleet-footed duo: 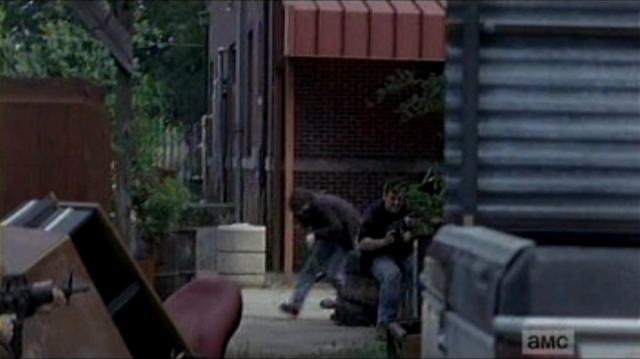 Just duck your head a bit; they'll never be able to nail you, even as you run right toward them: 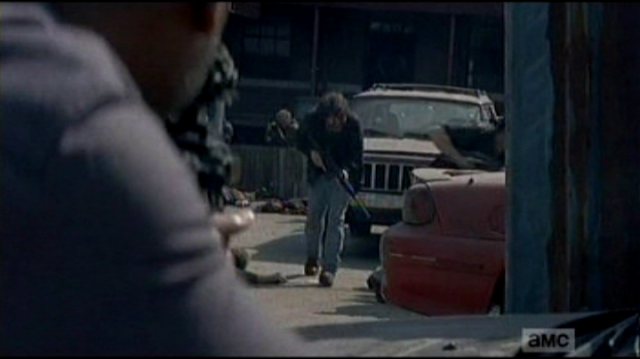 How hard is it to machine-gun this guy from this angle? 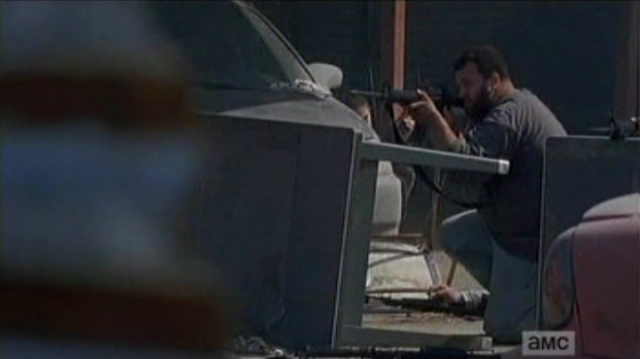 At one point, Aaron sees some Saviors trying to flank Eric and some other fighters. These infiltrators are practically in reach of him. This is his point of view on them: 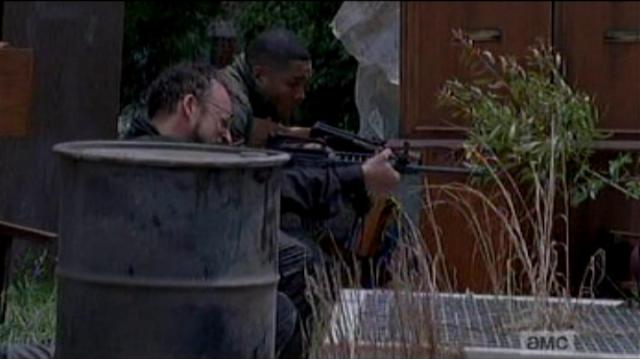 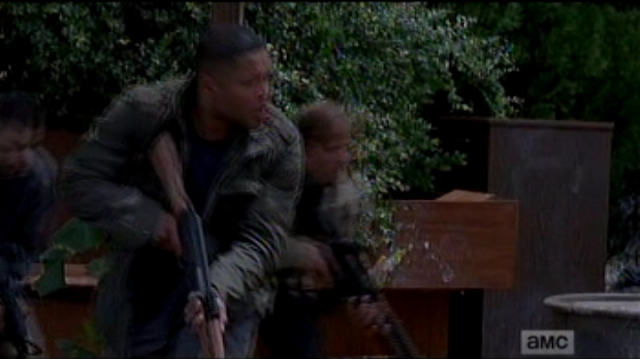 Instead of just gunning them down, he jumps in a car and backs over them. The car seems to go from 0 to 70 in the space of about two feet. This is how close it is to them as he cranks it and they pass behind it: 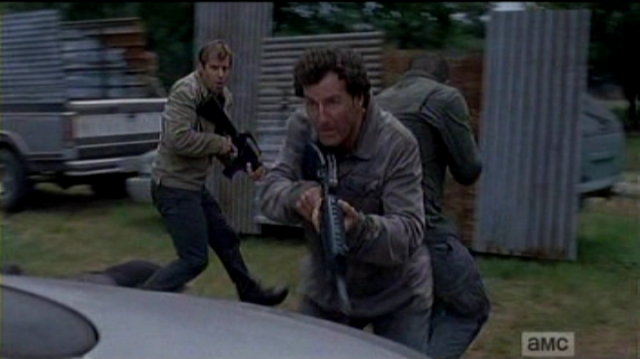 ...yet when he throws it in reverse, the impact on the no-goodniks is so great, they're sent flying over its hood to their deaths.

The entire shoot-out is filled with this sort of thing. Eventually, the dead Saviors begin reanimating and eating their former comrades; these zombies, which are people who were just killed moments earlier, are made up so that they're grey, have sunken features, inhuman eyes and look like they'd been dead for weeks: 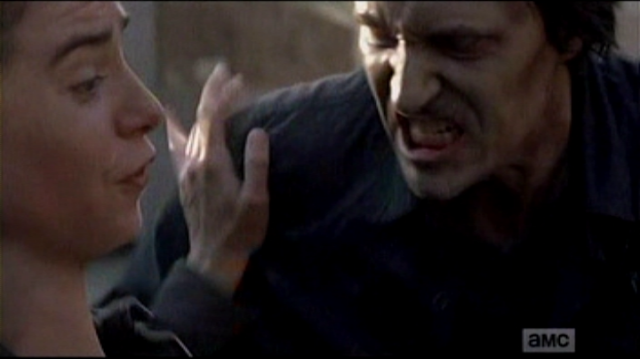 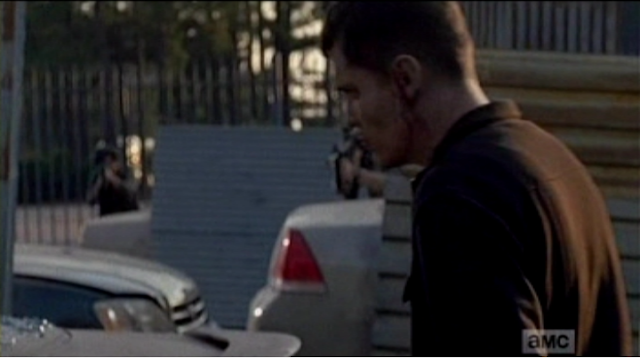 There are some other amusing errors in the ep as well. At one point, a group of Saviors gun down a pair of redshirts who were with Morgan. One of the redshirts had been very nervous about gong on the mission and after he dies, his corpse stares at Morgan in a way that was meant to be creepy and probably would have been if the actor hadn't been visibly breathing every time the camera fell on him. More bizarre is an image Morgan sees when he emerges from the Savior compound after going on a bit of a killing spree. Jesus, Tara and their team had just captured and disarmed a group of Saviors, who dropped their guns, walked out of the building and surrendered. When Morgan steps out in the aftermath, there among the Saviors is Jared, the bastard who, last season, stole Morgan's stick and murdered Morgan's young trainee Benjamin. And he's holding a rifle! That's him over Morgan's left shoulder: 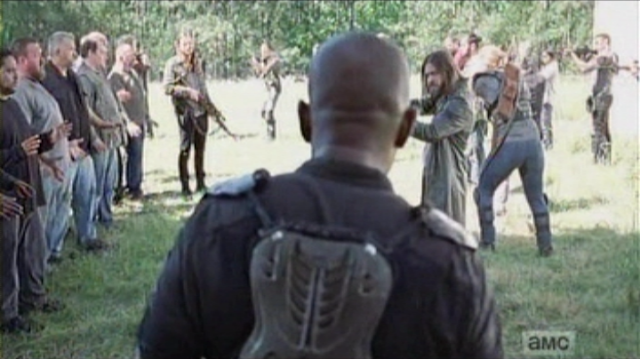 Morgan has a lightning-fast flashback then walks up to Jared and the rifle is suddenly gone: 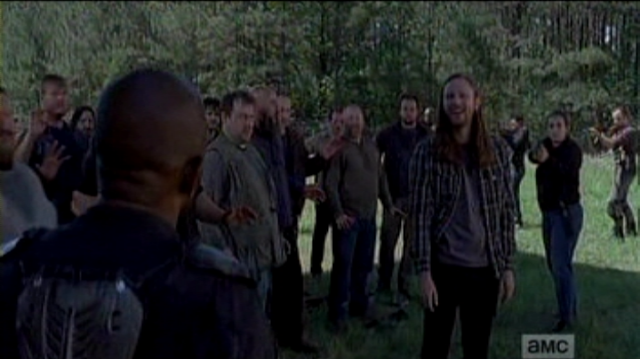 Jared is nothing but a murderous bully but Jesus won't let Morgan kill him, which is part of another ridiculous retread element in this ep, a badly-handled effort to craft a moral quandary. In the midst of what appeared to be simply a search-and-destroy mission, Jesus suddenly developed an humanitarian streak and insisted his people not just wipe out the enemy. This basically comes out of nowhere. Earlier, a Savior had hidden in a closet and pretended to be a terrified innocent only to turn on Jesus and Tara when Jesus sought to offer him mercy. Like most of the Saviors, this one was drawn as cartoonishly evil, making a grand flourish of crushing beneath his heel the prenatal vitamins the Saviors had stolen from Hilltop and that Tara had just said Maggie needed. He didn't offer a hearty "MUAHAHAHAH!!!" when he did it but if viewers heard that in their heads anyway, they were alert to the spirit of the moment. Jesus managed to put down this vitamin-crushing lout then still insisted on taking him prisoner instead of killing him. Our heroes, who are already short the manpower they need to fight the Saviors, certainly have no capacity to deal with prisoners, nor apparently were they part of any plan. The Saviors have proven themselves to be nothing but sadistic murderers who will kill you if you turn your back on them for even a second--something that had, in fact, just happened again. I'm sure Jesus' course of action will work out for the best all around, just as these things always do on TWD.

Rick, meanwhile, never finds that cache of guns but he does fight and kill a fellow whom he assumes is protecting it. The man's shirt is helpfully torn open and we see he has a tattoo of the name "Gracie." When Rick explores further, he finds a room with a sleeping baby, its name "Gracie" helpfully spelled out on a mobile over the crib. "TWD: We Do SUBTLETY!!!" Rick is clearly upset by what he's done and looks in the mirror handily present for just that moment, one of Rick's "what have I become?" moments.

Somewhere else in the world, Ezekiel learns from a radio that the Saviors have learned he and his team are coming (gee, ya' think?) and he decides to carry out the mission anyway. He's just spent the entire ep smiling, crowing about the great victory to come and expounding on the fact that he's smiling and crowing about the great victory to come. He is, in short, being set up for an epic fail, something that will no doubt play out next week.

This should have been a suspenseful ep but lacked any suspense. It was an action-packed ep but the action was handled just as badly as the drama in every ep. Like last week, the lack of any explanation for what the different teams are supposed to be doing, besides just killing Saviors, leaves viewers without much of a narrative line to follow[2] and when even that goal is abandoned, one can't help but wonder, what's the point?[3] This is TWD's 4th stuck-around-way-too-long season and in these first two weeks, it's shown no sign of life.

[1] After the Safe Zone's first attack on this facility, the Saviors had installed a zombie "moat" around it, a double fence with the space between filled with zombies, just as Murphy built around his own headquarters in last season's Z NATION. And though our heroes are standing and talking only a few feet from the zombies in that moat, none of the creatures react to their presence until the script says it's time for them to do so.

[2] In the comic, our heroes led the zombie horde to Negan's compound in order to pin down Negan's best fighters there and take them out of action. On tv, they mounted a major attack on Negan's compound just so we could get a few more minutes of Jeffrey Dean Morgan mugging and camping it up.

[3] The Kingdom team stays together (though it has a secondary group off camera that hooks up with it toward the end), the Morgan/Jesus/Tara team splits into two different groups and Rick's team is split into two different groups, then Rick and Daryl both go off on their own. With so many simultaneous threads and without a narrative line to contextualize them, the matter of who is where becomes at times a bit of a jumble.