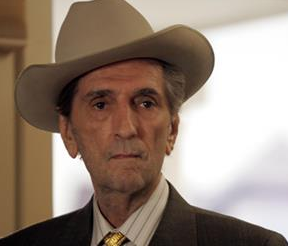 Harry Dean Stanton has died. Harry was a great, often underappreciated though much beloved actor--a personal favorite--and quite a character, who came to specialize in memorable, offbeat roles. A Kentucky native and veteran of World War II, he was bitten by the acting bug while at university and just went with it. He worked right to the end (he finished two movies that haven’t even been released yet) and with 200 credits in a career that spanned more than 50 years, his notable parts seem almost endless. The amnesiac Travis in PARIS, TEXAS, the ill-fated Brett in ALIEN, Brain in ESCAPE FROM NEW YORK, the hopped-up repo specialist in REPO MAN, he was a regular in David Lynch's troupe for years--a brief smattering like that can't even scratch the surface. One of my perhaps oddest but most persistent images of him is from THE FIRE DOWN BELOW. It was a truly godawful Steven Seagal picture and after slogging through this unintentionally hilarious movie, Harry utterly randomly comes out on his porch with a guitar at the end and sings "Kentucky Waltz." In context, it was utterly surreal. And it was glorious.