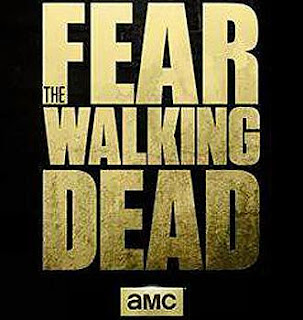 In the last two or three weeks, some of you--you know who you are--have been bombarding me with questions about whether I'm going to be watching and writing about the new FEAR THE WALKING DEAD series. Until fairly recently, I'd been avoiding both the series and the questions. My first look at material from it didn't go so well. And didn't speak very well of its creators.

Thankfully, the pilot itself featured no further replication of material from the execrable WORLD WAR Z. Unfortunately, it didn't feature much of anything else either. The beginning of a zombie apocalypse is, in competent hands, a story with all sorts of potential and Los Angeles is a good setting for it. The creators of FTWD decided it would be just peachy to tell it through the eyes of a collection of dysfunctional, unbearably obnoxious, uninteresting and unlikable people--a complete fail when it comes to the central cast.

This is only one of the sins of the mother series carried over to the offspring.

The pilot ran half-an-hour longer than the usual hour-long timeslot but huge portions of it were taken up with filler material that added nothing but running time. The characters fail to share vital information with one another solely for the metatextual purpose of artificially extending the underwritten story. Nick, a junky, encounters a zombie in a drug-den as the ep opens. He tells Travis, his mother's boyfriend, about it, Travis checks it out (unarmed exploration of a crack-house and in the middle of the night) and finds an incredible amount of gore--as in, someone, maybe several someones, obviously died horrible deaths at the scene. He doesn't take the info to the police, which is, in context, somewhat forgivable, but when he tells his girlfriend, Nick's mother, about it, he only says something bad seems to have happened there--not a word about thick gouts of gore on the floor and wall. And lacking this information, she just blows him off. And he lets her do it, even  as she accuses him of acting as her son's "enabler" by talking about it (she wants to dismiss the son's entire story as some drug-fueled hallucination). This is done solely to allow a later twist to convince her she needs to see it for herself and we get the same explore-the-crime-scene sequence repeated with the two of them, leading to the same conclusion--something bad happened here--and adding nothing but running time.

A common pitfall for prequels is that we, the viewers, already know where it's all going. Among other things, we go into any such project facing the prospect of watching characters figure out a very long list of things we already know, which is dull. There are a few ways to overcome such problems. One is to play on what the audience knows but the characters don't. There are two or three very minor tips of the hat to this in FTWD, no more. Another is to handle the familiar material in new and interesting ways. There's certainly none of that in FTWD--it's shot as flatly, dully and straightforwardly as its parent program. Another is to allow time to jump so as to let the characters learn off camera things we already know. Still another--the big one--is to tell a part of the story that hasn't yet been told. FTWD's untold story is, of course, how it all happened--how the world died while Rick was in a coma. That doesn't mean one provides some explanation for the zombie bug--Robert Kirkman is right in saying that should never be explained. How does the apocalypse start though? In what populations does zombie-ism show up? What's the reaction to it? How does it spread--globally down to outside one's back door? Why do the living fail to contain it? Los Angeles is huge. The tale could be told from a wide range of perspectives. Lots of disparate characters from different walks of life, occupations, social classes. See it happen through a variety of eyes, characters who could either come together or whose story could simply continue alongside others. This could be a great story and it's the one great story built into FTWD's premise.

Alas, it's the one story FTWD's writers seem entirely uninterested in telling. The pilot script (which is just awful) dodges it at every turn. The news cycle apparently doesn't exist at all in this world. As what we, the viewers, know to be zombie-ism begins to swell and make its presence known, there's no word from officialdom at any level. Even as the school at which the two leads work empties out from the sick, the only thing the characters learn comes from bootlegged Youtube vids of cops shooting it out with a zombie on the freeway (a scenario and scene directly lifted from George Romero's DIARY OF THE DEAD). The script focuses almost entirely on the ridiculous family melodrama scenarios and there's no exploration from any quarter of what could possibly be happening and how. One random kid at the school seems to have figured it out and he's presented as some sort of weirdo. There's no effort to create any sort of sustained atmosphere of concern or fear or uncertainty. For the most part, everyone just goes on about their business--woe is me over the poor junkie, woe is me over my unappreciative son, woe is me, the overachieving daughter, etc.--and barely even mentions what's happening.[1] And the dialogue piles on the clichés as thick as the Los Angeles smog--if one's ear is sensitive to such things, it would be prudent to keep antibiotics handy.

FEAR THE WALKING DEAD certainly didn't take off in its oversized inaugural episode. This pilot is definitely missing a plane.

[1] UPDATE (25 Aug., 2015) - I'd be remiss if I didn't mention (and was remiss the first time around, 'cause I didn't) that among the other sins of the parent series carried over to the spin-off is the habit of killing the black guy. On TWD, this has become like a long-running joke. The FTWD pilot introduces two black characters, Calvin, who is Nick's drug-dealer pal, and Matt, who is teen daughter Alicia's boyfriend. By the end of the ep, Matt is among those who have disappeared to an unknown fate while Calvin tries to kill Nick and ends up being killed himself.
Posted by cinemarchaeologist at 1:17 AM