"Not long ago, in the unexplored reaches of an unmapped swamp, the creative genius of one man collided with another's evil dream, and a monster was born. Too powerful to be destroyed, too intelligent to be captured, this being still pursues its savage dream."

Some clunky wording, but an opening that does manage, at first, to strike a chord of myth, and with it begins Wes Craven's SWAMP THING, a movie as uneven as the legend. Its full-scale rise-to-the-level-of-mythical moments are there, to be sure; they're just few and far between. It's moments of thud-and-blunder are there as well, and while they don't entirely sink the project, they do condemn it to failing to live up to its potential. 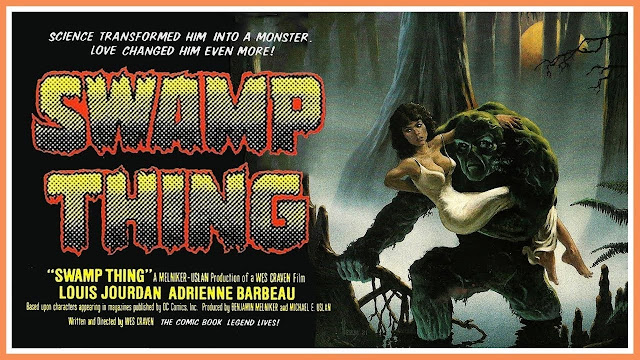 It's potential was significant too. The then-defunct DC comic on which it was based is excellent and excellently suited for screen adaptation. Creators Len Wein and Berni Wrightson crafted a dark fantasy world where evil wizards in foreboding castles schemed to take their revenge against the world that had spurned them and red-eyed werewolves haunted fog-shrouded Scottish moors and dark caves held Lovecraftian creatures-from-beyond who plotted the downfall of the universe, and at the center of it all, a man made monster by science. "Swamp Thing" was part of a renaissance of moody, excellent and utterly under-appreciated-in-their-time horror comics that appeared in the 1970s as long-standing Comics Code restrictions on the genre were lifted.

The movie falls well short of the comic but in much the same way as the Grand Canyon is a bit of a ditch, there's a bit of a gap between the standard set by the comic and Bad and, overall, the movie falls into it, often frustratingly so. Craven, a horror specialist, was a solid choice for director but his adaptation is an uncomfortable cross-breeding of a contemporary action picture with what would, in the '30s, be classified as a "weird tale." The weird end of it works. The action end of it mostly doesn't.

The cast is a genre fan's dream. Ray Wise is Alec Holland, a brilliant scientist working on a super-secret government project to build a better vegetable, plants with a stronger survival instinct capable of averting future famine. Holland has set up shop in a particularly photogenic--and particularly swampy--swamp in Middle of Nowhere, U.S.A. and as the film opens, we enter his world via stunningly beautiful genre fave Adrienne Barbeau. She plays Alex Cable, a new agent assigned to the project (her predecessor having been eaten by a gator!). Barbeau has a great part in this; no Damsel In Distress--though a damsel and sometimes in distress--her character is smart, resourceful and gets to kick a lot of ass as she thwarts the bad guys at every turn. The head bad guy on the end of all that thwarting is Anton Arcane, a shadowy villain intent on stealing Holland's work and using it to blackmail an increasingly hungry world. Louis Jourdan may be the only actor in the world who could have made Arcane work as written. The character is the sort of soft-spoken, laid back but evil and sharp-witted mastermind villain who sits around his posh estate sipping brandy while telling one of his doe-eyed followers how brilliant he is. It's the sort of part over which most actors would tend to ladle the camp. Jourdan instead plays it utterly straight and utterly sells it. One of his followers of a significantly less than doe-eyed variety is David Hess, the World Champion of Cinematic Sadists who, as Arcane's chief henchman Ferret, gets to run riot through all his boss's very dirty work. It's the kind of work Ferret really seems to love and the casting of Hess represents another perfect mating of actor and role. Arcane tries to put the snatch on the plant project, Cable makes off with the notebook containing the secret of Holland's formula, Holland ends up doused in his own chemical stew and it combines with the swamp into which he dives to transform him into a muck-encrusted, ambulatory humanoid plant-monster, played by Dick Durock. Holland, now the Swamp Thing, spends the rest of the movie trying to protect Cable from Arcane and his thugs.

That's the point at which things go awry. There are some good and even great moments thrown in along the way--the monstrous Holland's return to his now-destroyed lab, some great bits with a country-store-minder named Jude (Reggie Batts, who steals every scene he's in), a great scene between Cable and the creature when she discovers he's Holland--but a lot of the film's mid-section drops into underplotted-action-movie mode and, with Holland's notebook as the MacGuffin, becomes a repetitive series of chases and escapes--an ill-conceived structure hampered by a straitened budget and, palpably, the restrictions inherent in a PG-rated film (even the far more liberal PG rating of 1982). A lot of this material looks and feels as if it belongs in an entirely different movie. Harry Manfredini's score has the same problem. In its quieter moments, it's excellent, understated and perfectly suited to the material. The opening piece can even make the word "weird" pop into your head. When it switches to action-movie overdrive, it's loud, booming, with martial elements in the mix and while it does what it can to build suspense and is well mated to what's on the screen, it's just as out-of-place.

The movie recovers in its final act. Lots of weird goings on, some strange images, a final showdown between Holland and Arcane. Like the opening act of the film, it's much closer to the spirit of the comic but "closer," there, shouldn't necessarily be read as making the movie a horse-shoe or a hand grenade. It's entertaining. It could have been great.