Ang Lee's HULK and the Tyranny of Low Expectations

There's a reason practically nothing original ever comes out of Hollywood. The business suits holding the purse-strings at big studios don't want to take risks. They want the tried-and-true, over and over again. A successful formula is regarded as a priceless commodity, a thing to be milked until every dime has been squeezed from it then shelved so it can be pulled out in 10 or 15 years, dusted off and put through another good milking.

Upbudget "blockbuster" movies in particular aim for the lowest common denominator. The old dictum "nothing succeeds like success" is taken to its most ridiculous extreme in these films. They're almost invariably heavily derivative of some past success. Anything that may, at any stage, creep into them that may be unfamiliar to viewers is regarded as a risk rarely ever judged worthy of taking. Dialogue is kept to the absolute minimum and what little is allowed is kept to the absolute simplest--usually just a string of time-tested clichés used to glue together the explosions and CGI effects. These are films that don't want you to have to think, on the grounds that asking this of the viewer would alienate non-thinkers. Those clichés are both easier and safer. They, after all, became clichés because people have heard them before. And heard them. And heard them. Reaction is predictable, at least until the cliché has, by repetition, been ground to dust. The movies are even designed to tell you exactly what emotional reaction you should be having to what you're seeing. It isn't enough for Spielberg to show you the horrors of the Omaha beach landing in SAVING PRIVATE RYAN--he then has to show you the tearful soldier and give you the long, slow pan over all the scattered corpses to somber John Williams music. In case anyone got the idea it was a pleasant experience.

Even idiots, I suppose, need entertainment. The problem with most Hollywood fare--particularly the "blockbuster" breed--is that almost all of it is aimed at idiots and actively alienates anyone else. Movies like the TRANSFORMERS atrocities, the last three abominations traveling under (and travestying) the name of STAR WARS or anything ever touched by the hand of Roland Emmerich may be great for selling tickets to cretins and peddling plenty of tie-in merchandise but they're dreadfully stupid, unengaging and actively insulting to anyone who isn't a complete moron. They make lots of money, of course. There are lots of morons out there.

This doesn't mean there are no good big pictures. It can be taken as a truism that personal art films don't get hundred-million-dollar budgets but Hollywood's "nothing succeeds like success" ethos do create a hierarchy of certain filmmakers who have proven themselves capable of generating box-office gold and while many of those who rise to the top of the heap are pop hacks, studio stooges and shit merchants like Emmerich, Michael Bay, and Brett Ratner, some of them are genuinely talented and, as proven successes, are sometimes allowed to take a crack at the big pictures and are often given a much freer hand than would normally be allowed on a show on which the budget had taken serious wing. 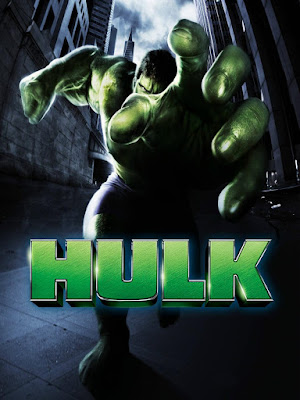 Ang Lee is one of the latter. A few years ago, he helmed HULK, Universal's uber-budget screen adaptation of Marvel Comics' mighty, gamma-irradiated Jekyll-and-Hyde. In real time, critical response to it was mostly quite positive. The popular response was very different. HULK suffered massive box-office drop-off after its first weekend, was written off as a flop (though its eventual gross doubled its budget), spawned a sequel constructed around the idea of making a movie as different from the original as possible and today, nearly 7 years later, is routinely reviled by those who haunt the movie-related corners of the internet, placed in the company of ELEKTRA and CATWOMAN whenever the worst comic-to-film adaptations are discussed.

In general, I consider the state of contemporary film criticism to be rather poor. HULK, however, was a case where the pros mostly had it right. It is a big-budget "blockbuster" flick, with all the baggage that implies. No film of that origin is ever going to be RASHOMON. It is, however, also an excellent film, one of the best comic-to-screen adaptations we've ever gotten. It isn't perfect. There are a few scenes that don't work, some corners that are cut, a clunky line or two in the script and an epilogue that should have been handled better but with all its flaws, it's still a mini-masterpiece and when measured against nearly everything else that's produced on a budget with a comparable number of zeroes, that "mini" seems more like an extraneous qualifier.

HULK tells the story of Bruce Banner, a brilliant but emotionally stunted scientist whose calm exterior conceals repressed childhood trauma. When a lab accident reacts with his unique physiology (a product of medical experiments by his batshit crazy father), the cork pops from the bottle and all that concentrated bad mojo is unleashed in the form of a full-body transformation into a huge green monster that grows in strength as it grows in rage. Jennifer Connelly plays Bruce's scientist colleague and estranged love, who is drawn to Bruce because his emotional distance plays into her daddy issues. And the daddy she's trying to find in another and fix by proxy is none other than the man who put away Bruce's own crazy father decades earlier.

It's a long story.

And that's one of HULK's strengths. The story is complex and involving, the polar opposite of the typically brainless excretions of the blockbuster factories.

That's also the beginning of HULK's problem with the audience it initially drew. Far too many of those who, in 2003, trekked to their local movie-houses to take in the opening-night show assumed they'd be getting a typical big Hollywood Summer picture. With their heads filled with anticipation of two-plus plotless hours of a brainless monster brainlessly breaking things, they were utterly bewildered by having, instead, stumbled upon an actual film; well plotted, well paced, well played by a first-rate cast, with an extraordinary score, innovative editing, a heart. Dashing expectations can be a risky proposition when it comes to movies. Usually, though, a film that exceeds our expectations is taken as a pleasant surprise. Not so with HULK. In a chillingly perverse twist, the movie, instead, has stood repeatedly condemned for, in effect, being better than was assumed it would be. Worse, it routinely took (and still takes) lumps for even trying to be more than just another disposable popcorn flick. It's both a "Summer blockbuster" and a movie based on a comic book and there's an unfortunately common notion afoot that projects in those categories are supposed to be merely mindless rubbish for dazzling bumpkins. "Fun," defined in the most reductionist manner, and nothing more. Any pretense of being something more is just that, an affectation of unwarranted importance, a preposterous attempt to blow up the material into something more than it is. HULK, it seems, just doesn't know its place; it commits the sin of aiming for something more than mediocrity. In a sense, this is a testament to the film's quality. It clearly doesn't cater to such low expectations.

But that's a big part of why it took a beating from a loud segment of the public. Even allegedly professional film critics like Entertainment Weekly's Lisa Schwarzbaum complained about the lack of "big dumb fun." Ang Lee, as she sees it, "anesthetizes his Marvel Comics mutant with a mopey psychological back story that leaves little unanalyzed space for fun." Charles Taylor, the gibbering git who used to grind out what passed for movie reviews over at Salon, dismissed HULK as a "leaden, pretentious flick" that is "just schlock art for the NPR set." It takes itself too "seriously." Lee "has no taste for the low." Lee "seems to be under the impression that he's working from myth instead of a good pulpy premise." And so on.

This is Beavis-and-Butthead level "criticism," albeit dressed up, Madison Avenue style, by a few words of more than two syllables. It's also, substantively, fairly typical of (if slightly more literate than) the standard grief the film gets from its detractors on the internet in the years since its release. In general, those who fulminate against it fail to make any real case for it being a deficient production. Honestly, on what planet is a movie rightfully considered problematic if it isn't dumb enough?

And that's only the beginning. Feeding off one another, advocates of HULK's irredeemable suction roll out a small, standard litany of related complaints with a regularity that numbs the mind. That's also the effect generated by the complaints themselves, which--hewing, always, to that same Beavis-and-Butthead level--amount to anything-and-the-kitchen-sink efforts to rationalize a dislike of a movie that, in truth, does little to earn it. The movie is said to be poorly paced. It isn't. Viewers who lack an attention span be advised up front that you may find HULK challenging but your own shortcomings in this area hardly amount to a problem with the film itself. The CGI Hulk character is bashed and it became fashionable to demeaningly compare it to Shrek. Other than both being some shade of green, the two characters have no similarities and the larger complaint, even if taken in any way seriously, falls into the category of whining about superficialities. Special effects aren't a story; they're just a means of telling one. I'm not a fan of CGI but the CGI Hulk was competent, and, for its time, state-of-the-art and quite innovative. If the criticism isn't aimed at the technology itself (and it isn't), it is without substance. You find few HULK detractors who don't knock the movie by making a grand show of noting that, when the mutant dogs appear, one of them is a poodle. And so on.

That's not to say the film isn't subject to any number of legitimate criticisms. It's just that most of what it gets doesn't fall into that category. And anyone who would throw out HULK in a discussion of all-time-worst comic adaptations or, worse, mention it in that context in the same breath as something like ELEKTRA or BATMAN AND ROBIN is, to put it bluntly, a clown whose words aren't worth the breath wasted to give voice to them. Further, pawning off as a serious criticism that a movie isn't sufficiently dumb actively discourages even attempting to rise above the level of those genuinely bottom-of-the-barrel projects and I find this to be reprehensible. Ang Lee was aiming for something more with HULK and he succeeded admirably.

That is, of course, my own conclusion and no one is bound to agree with it. I certainly don't insist that a fan of typical Hollywood Summer fare who disdains HULK actually offer some rational critique of the picture--I'm not a cruel man. I do, however, insist that for anyone who expects to be taken seriously, HULK must be accepted or rejected for what it really is, not for having fallen short of some inane standard invented solely for the purpose of making HULK fall short of it. For my part, I think it's a misunderstood, if relatively minor, masterpiece, a film in the same vein as (if not necessarily on par with) BLADE RUNNER, EXCALIBUR and ONCE UPON A TIME IN THE WEST--all generally snubbed in their day, all eventually rediscovered, all now just as generally hailed as classics. I'd like to think this is the fate that one day awaits HULK. It certainly deserves it.

--j.
Posted by cinemarchaeologist at 1:11 AM