Snoots v. Horror on the IMDb

A huge, supernaturally powerful monster plagues a community, attacking the residents, literally eating them alive and leaving only pieces of them as evidence of what's happened. The local sheriff deduces the problem but as officialdom is adamantly indifferent/openly hostile to his explanation and the killings continue, he enlists the aid of experts, who join him as the monster goes public, starting a panic and forcing officialdom to get behind our heroes. The tale culminates in an all-out effort to destroy the monster, one in which the hunters become the hunted and are, themselves, nearly destroyed before launching a final desperate ploy that manages to take out the menace.

The plot in this case is that of JAWS from 1975 but nearly every significant element of it had been standard fare in horror movies since the 1950s, movies of which JAWS is a lineal descendant.[1] Nominally based on a novel by Peter Benchley, the film bears only a passing resemblance to the book. Its cinematic influences are primarily those earlier horror tales, beefed up with a more visceral approach to visceral matters, a healthier quotient of blood-spilling, more attention to characterization and a helping of post-Watergate cynicism toward authority.[2]

That last wasn't really a new element in these films. While their heroes were usually drawn from officialdom, their monsters were very often unleashed via ill-advised government nuclear tests. JAWS revived the specter of malevolent authority in a huge way and it quickly became a cliché in the horror movies of the decades that followed.

That's only part of the profound influence JAWS had on the horror genre. It truly was a landmark. There probably isn't a monster movie that followed it that wasn't in some way influenced directly or indirectly by it. It spawned three direct sequels. It began a very long cycle of direct rip-offs. Derivative but less rigidly duplicative man-vs.-nature films sprang up in its wake to such an extent that they became a virtual sub-genre unto themselves. The lineage of the film was widely recognized and whereas many of the older movies in its DNA subtextually (and sometimes textually) converted their creeping, crushing killer critters into ambulatory critiques of an aspect of Cold-War-ism, these derivative pictures often featured a modern twist on the same theme--human tampering with the Earth's ecology was often what produced the problematic plague of monsters.[3] Nearly every aspect of JAWS, from its editing to its tension-building score, proved inspirational to more future productions than can be easily counted. It even managed to make some very classy use of such shopworn horror movie elements as jump-scares.

Scares are what the movie promised and scares are what it delivered. JAWS became the most successful horror film ever made and in much the same way PSYCHO had generated a great deal of anxiety about showering, a lot of people, in the summer of '75, suddenly stopped going to the beach. The film became an omnipresent reference in the literature on horror cinema in the decades that followed, claimed a place on more critical "best horror movies" lists than can be easily counted, and was uncontroversially regarded as a horror film by entire generations of viewers.

So where am I going with this? 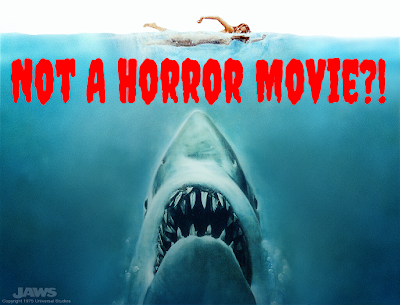 It seems the inclusion of JAWS in the horror genre--the genre that birthed it, the genre over which it subsequently had such a tremendous influence--is now being called into question in certain quarters. A breed of snoots who have long vexed genre cinema regard horror movies as inherently worthless low-brow trash and hold that no film as good or as well-made as JAWS could possibly be rightly included in the genre. These snoots are not deterred by the fact that their fanciful "opinion" requires ignoring the entire history of something like JAWS. Indeed, they often turn the universe on its head by accusing horror fans of trying to appropriate the prestige of such a film by falsely associating it with this disreputable genre.

Over at the Internet Movie Database, where users submit data about the films covered by the site--all films, in theory--the snoots have been trolling of late and systematically removing "horror" from the genre classification of large numbers of films that, while clearly horror movies, have achieved acclaim or popularity. They replace "horror" with "mystery" or "fantasy" or "action" or "thriller" (probably the most popular replacement). Movies caught up in the snoots' crusade include ALIEN, JAWS, THE SIXTH SENSE, PSYCHO, THE SILENCE OF THE LAMBS and many others, all of which have routinely had their "horror" genre classifications inappropriately removed.[4]

Fans on the IMDb boards, particularly horror fans, noticed this development and began to take offense at it. Some of them even decided to make a fight of it and actively work toward countering the snoots. It's been a recurring brawl on the site for a while now. It recently flared up again, with posters Zombie CPA, Golgo 13, and Gertflump, among others, taking up the cause. They pointed out that, while JAWS and ALIEN had been inexplicably stripped of their "horror" tags, the sequels to these films still carried them; the sequels were promptly stripped of their horror tags as well. ALIEN recently recovered its tag but JAWS remains, in the IMDB, a "thriller." Any user trying to change that classification in any way is met with this:

"Our genre manager has determined that this title is not an action or horror movie."

THE SILENCE OF THE LAMBS is currently tagged "crime" and "thriller." Unlike most of the others, it's a film about which legitimate arguments can be made,[5] but try to add a "horror" tag to it and here's what appears:

"Our genre manager has determined that this title is not a horror picture."

The genre classification on these (and probably other) films has been locked, so it can no longer be changed, which points to the most significant aspect of the snoots' crusade and why I decided to write this piece: Officialdom, in the person of IMDb's "genre manager," has inappropriately sided with this tiny, noisier-than-knowledgeable minority, carving its inane, ill-informed and inaccurate assertions into stone and even ignoring IMDb's own genre guidelines in order to do so:

"Horror should contain numerous consecutive scenes of characters effecting a terrifying and/or repugnant narrative throughout the title."

That is, frankly, terrible as a guideline, in that it excludes from "horror" a large percentage of the total horror films ever made, particularly the older classics.[6] More to the point though, some of the movies it definitely doesn't exclude are the very ones the snoots have challenged. ALIEN, THE SIXTH SENSE, SE7EN, PREDATOR, and both JAWS and THE SILENCE OF THE LAMBS--both officially and permanently excluded from the "horror" genre by the genre manager--not only fit the definition but couldn't fit it more precisely if they'd been intentionally designed to do so. Only by willfully ignoring even this excruciatingly narrow guideline--so narrow as to be, practically speaking, worthless--can they be excluded from "horror."

The practical effects of all of this is that "horror" is in danger of being reduced, in the database, to an absurdly truncated category, shorn of many of its best-known films, while the genres usually used as replacements for it are, by this abuse, being stretched to the point of meaninglessness. Someone attempting to actually use the database to find horror movies ends up getting a very incomplete selection, while those looking for things like mysteries and thrillers end up getting tons of movies that are neither. A portion of the database is being rendered increasingly useless by the actions of the snoots.

For my part, I don't like the snoots. I don't like the poisonous blend of loud arrogance and complete ignorance they demonstrate when they crawl out of their holes to offer their idiotic assertions in public.[7] I don't like people who are supposed to be responsible moderators who, instead, abuse their power by becoming partisans of such idiocy by ignoring even their own guidelines in order to carve it into stone and place it beyond challenge.

I do love movies. I do love horror movies. I like the IMDb Horror board, even for all of its shortcomings. It's the liveliest of the IMDb boards and I'm fond of a lot of the folks who post there. They've been the ones bringing attention to this problem and I'm certainly with them all the way. To them I would say, you're right--don't ever give up. Feed the snoots to the damn sharks and let them explain, as they're being gobbled down, if the experience is thrilling or horrifying.

[1] In fact, the movie is, structurally, practically a remake of 1957's THE MONSTER THAT CHALLENGED THE WORLD, a movie about giant mollusks in the Salton Sea, with a touch of MOBY DICK thrown in during the final portion.

[2] It's also a sort of follow-up to an excellent, stripped-down monster movie director Steven Spielberg had made three years earlier. In DUEL, the "monster" was a lumbering behemoth of a semi (whose driver is never seen), which pursued motorist Dennis Weaver across desert highways with murderous intent, and JAWS makes plenty of references to it (Spielberg has said he viewed it a sort of sequel to DUEL).

[3] The idea of horrors being generated by man tampering with nature is an element of horror cinema with a lineage stretching back nearly as far as the film medium itself (since at least Thomas Edison's 1910 adaptation of FRANKENSTEIN).

[4] The database allows for a film to carry multiple genre classifications. Some have as many as six or seven. This makes the snoots' insistence on removing "horror" from movies that are clearly horror films even more offensive.

[6] And the "horror" definition is only one of many prominent problems with the guidelines.

[7] JAWS features a 25-ft. long great white shark (the largest verified great white on record was only 21 ft. and it was found over a decade after the movie), one that is supernaturally powerful--we see it uproot a pier, drag around a large boat, and haul multiple barrels full of air beneath the surface of the water at will. Rather than being nomadic, like real sharks, it vindictively plagues the same island community. It makes human beings its regular diet--by the end, the three human beings in all the ocean who want to kill it--and even jumps onto a boat to sink it so that it may eat its passengers. It's a movie monster and literally nothing about it is normal, yet when I started writing about it in relation to genre classification over the weekend, "Motley moth," one of the most clownish of the snoot clowns, wrote, to me, "You need to study marine biology. There is nothing that happens in Jaws that could not happen in real life. Everything the shark does has been observed in real life. There is nothing in its behavior that is unnatural, bizarre, or previously undocumented. It was a scientifically accurate portrayal of a large predator in its natural environment. I'm not trying to insult you. I'm just giving you the facts."
Posted by cinemarchaeologist at 11:15 PM