I have a buddy. He loves movies. He's not as picky as I, though, about what he chooses to love. As he hasn't family locally at hand, I have, for some years now, had him spend the various holidays with me and mine. He did this year, as usual, and brought a pile of movies to watch, as usual. Generally, he is, to be honest, terrible at picking movies--goes by whatever box cover looks cool. This year was no different. He appeared on Christmas Eve with a large pile of space-wasting genre features, as usual, and, over two days, we nevertheless watched them all, as usual.

One, in particular, stood out as exceptionally awful, a shitty little ditty called PANDEMIC.

How to put it?

One can actually feel oneself getting dumber while watching PANDEMIC, a film seemingly created by complete idiots for an apparently like-minded audience. As it went along, I made little then no effort to resist the nagging temptation to point out its many idiocies. Talking during movies is usually a no-no, but this one was just too much--it was draining some part of my soul. Even my buddy, who, having chosen it, can sometimes become defensive over that sort of thing, laughed at it with me as it went along. It gives me a sharp pain to think someone gave perhaps as much as a few million dollars to the poor fools who made it (the holiday season being an appropriate time for undue mercy, the latter shall remain nameless).

PANDEMIC is a thrill-free thriller about a small town in New Mexico that becomes infected with a disease that kills both livestock and humans. After a horse, a cow and a rancher become infected and die from it, the town vet gets together with the town coroner and, inspecting the rancher's corpse (with "sterile" gloves left laying openly on the same table as the bloody, diseased corpse), decide to call the Centers for Disease Control, as officials always do when a disease is so dreadful it kills a cow, a horse, and a rancher.

Within half an hour of their call, a huge military contingent arrives and quarantines the entire town.

As always happens when one calls the CDC, right? Particularly after such a terrible death toll.

The military boys don't seem to be under the command of, say, the President of the United States. They are, instead, under the command of a general who, though not the president, has, we're told, the power to issue executive orders with the force of law over the civilian population! And he does so, we're told repeatedly, under the authority of some conduct code internal to the military. And this internal military conduct code gives him the power to seal off a U.S. town from the entire world. He doesn't just keep people from moving in and out, he cuts off the mail, phone communications with the outside world, including cell phones (quite a trick!) and--horror of horrors!--even turns off the town's cable! This is said to be a town of only a few hundred people but our veterinarian heroine is seen driving through it, post-quarantine, in one of those awful music-video-inspired existential-crisis-as-montage sequences, and there are perhaps hundreds of cars driving the multi-lane streets. An idiot character included solely for the purpose tells the second-in-command among the military brass that he's been feeling sick, fears he has the disease, has heard rumors that there is a "vaccine," and requests that he be made a test subject for it. A vaccine, of course, is worthless to those who already have a disease but the colonel in question says there is one and even gives it to the fellow.

And so on. In the end, the whole thing turns out to be a bio-weapon test and one is as unsurprised by this generic turn of events as one is wholly unconcerned by it or anything else in the movie by the time it is revealed. It's hard to understate how profoundly bad is PANDEMIC. It has a script that would insult the intelligence of a 12-year-old from the sorriest excuse for a school in the U.S. and those who made it had the money to get Ray Wise and a shitload of military equipment for it (and I'll admit, the thought that this happens in a world in which I, in an effort to finance my own film project, have had to resort to rubbing quarters together in a vain effort to get them to mate probably didn't enhance my viewing experience, either).

But at least it had a cool cover. I suppose. 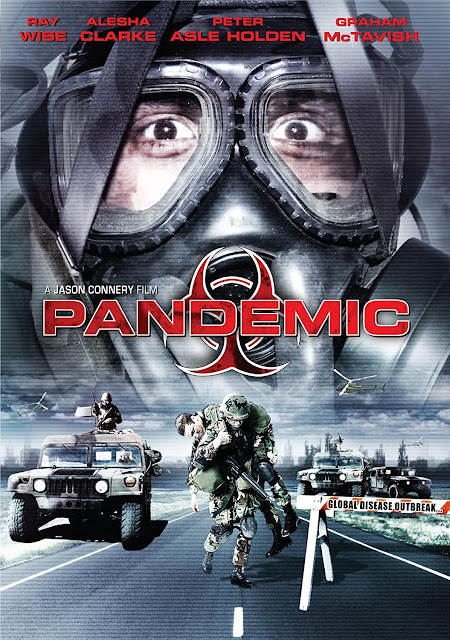 Posted by cinemarchaeologist at 1:58 AM