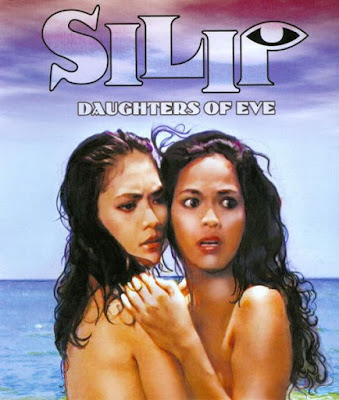 Sometime early last year, I got my first look at a 1985 film called SILIP: DAUGHTERS OF EVE. It was a movie I'd bought more-or-less blind when the good people at Mondo Macabro brought it to DVD. My initial impression of the film had been that it was something of a blood-and-thunder masterpiece. A few nights ago, I pulled it off the shelf for a rewatch and found I enjoyed it even more than the first time around.

The obligatory exposition: SILIP is set in an isolated, seaside Filipino village and tells the story of Tonya and Selda, two locals who look at the world very differently. Tonya, lost within an extremist version of Catholic dogma, is sexually repressed to the point of near madness. She's harsh, bitter, never smiles and divides her time between trying to beat back her natural physical urges and trying to indoctrinate the village children in her joyless ways. As the film begins, her childhood friend Selda, who has been living in Manila for some years, returns, those Big City Ways having rubbed off on her. Selda is exactly the opposite of Tonya. She's sexually open, smiles, plays with children, enjoys having fun. The villagers don't much cotton to either of them though, and as Tonya and Selda make their way through a journey of self-discovery, a series of events lead passions to flare, jealousies to erupt, hypocrisies to rear their ugly heads and our two protagonists meet a terrible, tragic end. The movie is of a genre that, in its native Philippines, came to be called "bold," and it earns the word in every particular. It tells its thoughtful, multi-layered story through a sheen of wall-to-wall nudity, sex and bloodletting that apparently led some to mark it as an exploitation film.

I was going to come here and write about it, but some impulse led me to do a little Googling first. I thought it was a great movie. I was curious as to whether anyone else had thought so. I found a like-minded assessment by Kurt Halfyard at Twitch:

"Speaking without irony or hyperbole, Silip is a bona fide masterpiece."

I can get behind that. The "m" word is overused by people who write about movies. It is, however, entirely appropriate in the case of SILIP. Halfyard has a lot of nice things to say about the film:

"It is not often that this type of essential cinematic discovery comes along..."

"Kudos to UK label Mondo Macabro for bringing this intense film out of obscurity and hopefully into a beloved place in cinema history. Surely it belongs beside Nagisa Oshima’s In the Realm of the Senses and Alejandro Jodorowsky’s El Topo as one of the defining films that go after the extreme side of the human condition."

"Unlike many films labeled as extreme or exploitive cinema, Silip is a meticulously plotted, delicately structured and textured film that finds a sublime balance between thematic depth and shocking (occasionally even absurd) imagery. The two hour plus film wraps it all up in package that speaks volumes about human repression, how people individually and collectively deal with guilt, and the inevitable unleashing of the beast within if things remain bottled or suppressed for too long."

And so on. Halfyard said a lot of what I would have said about the movie if I'd just decided to write a full-scale review of it and he probably said it better than I would have managed.

Kurt Dahlke wrote about it over at DVDTalk, and he, too, recognized it as something special. Noting that it was being sold as an exploitation film, Dahlke wrote, "I can assure you that Silip is not your usual empty-headed sleaze show," and spoke glowingly of the production. "Bold viewers are Recommended to check it out." Hear, hear.

But some of Dahlke's comments about the theme of the picture suggest some confusion on his part. He talks about its "potentially disagreeable message" and, toward the end, fleshes this out:

"While the 'women are the root of all evil' message is ultimately distasteful, the truths exposed, and the path we're lead down in getting there, consists of quite a sumptuous, sensuous journey."

I wouldn't take issue with Dahlke's agreeable estimation of the film's merits but the notion that SILIP has as a theme the idea that "women are the root of all evil" suggests he wasn't paying very much attention. In the movie, the villagers do, indeed, come to lay all of their ills at the feet of Tonya and Selda, the two women at the center of the story, but the film makes it very clear they're completely wrong to do so and Dahlke even makes note of this elsewhere in his review. Imputing a pretty ugly misogynist theme where there really isn't one unfairly tarnishes the movie, and I was left wondering how Dahlke had come to a conclusion he, himself, seemed to refute.

That's when I came to Gordon Sullivan's review, over at DVD Verdict and immediately realized this is the thing about which I was going to have to write.

Some film critics who come to be seen as a little too smart for their own good often get a lot of ribbing for cooking up overly elaborate interpretations of a movie that have little or no real connection to the intent of those who made the movie and sometimes that ribbing is indeed earned but sometimes, it's the product of a basic misunderstanding of the art. Art is almost always subject to multiple interpretations. Producers of the new (awful) V television series, for example, disingenuously profess surprise that their alien invaders are so widely seen as a metaphor for the ultra-right's insanely paranoid view of the Obama administration but watching the show, that interpretation is not only unavoidable, it's delivered with all the subtlety of a jack-hammer to the face. The real measure of a proffered interpretation usually isn't the stated intent of the filmmaker (and V admittedly isn't the best example to make this point); it's whether or not that interpretation is supported by the film itself.

Reading a lot of film criticism, as I do, one inevitably comes across the occasional instance wherein a reviewer completely misses the point of a film but I submit that no possible reading of the events in SILIP allow for Gordon Sullivan's "interpretation" of it:

"The entire story lays the downfall of humanity at the feet of women, repeating the same ridiculous biblical tripe that has subjugated women for millennia. The 'daughters of Eve' referred to in the title are raped and then burned for desiring to control their own sexuality. It's not enough that the story is this ridiculously conservative, but it's reinforced with continual violent imagery, including beatings, hot sand to the crotch, and animal killing."

Sullivan calls the film "misogynist" and asserts that, in it, "the blame for everything wrong is ultimately placed on women."

...none of which is true. The villagers who blame Tonya and Selda for their ills are clearly shown to be wrong and the film is utterly unsympathetic to them and sympathetic to the two women who fall prey to them. The movie offers one of the most shocking portraits ever committed to celluloid of small-town prejudices, hypocrisy and mob mentality overwhelming all reason and leading to a dreadful end. Tonya and Selda are presented as particularly tragic because, by the time they're set upon by the mob, they'd reconciled their conflict, come to realize they'd each made a mess of their lives and the possibility of a better life seemed to be before them. Sullivan concedes that the men in the movie "don't come off as anything other than violent brutes," but that undermines--and, in fact, destroys--his case for the film's misogyny, its "misguided message, reinforced by the horrific fate of the protagonists," as he puts it. The women are victimized in a ghastly, protracted fashion--no one could possibly identify with their persecutors, nor does the film at any point ask the viewer to do so. The film's final image, dismissed by Sullivan, refutes, in rather spectacular fashion, any notion of the film as a vessel of misogynist Christian doctrine.

SILIP is excellent, and, like most works of art, subject to multiple interpretations. The things Sullivan and I write are sort of like that, too. So what am I to make of Gordon Sullivan? Is he one of those too-clever critics who out-clevered himself this time around? A simple imbecile? Someone who chose to write about a movie to which he'd paid almost no attention? Or am I the dumb one missing the point? I suppose the best anyone can do is watch the movie, read what we've written about it and come up with one's own interpretation of who got it right.

--j.
Posted by cinemarchaeologist at 5:33 AM