HALLOWEEN 5, or One Sunday Afternoon 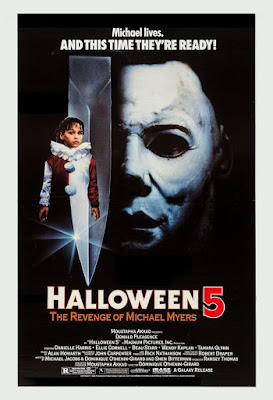 It doesn't seem possible, but it's been 20 years since HALLOWEEN 5 first stalked across North American movie screens. A 20th anniversary is usually a big deal for some pop culture creation, if only because so few pop culture creations manage to last that long but H5 really owes any longevity it may have to the original HALLOWEEN, which goes back 31 years (which REALLY doesn't seem possible), and it's too minor a movie in its own right to justify making much of a fuss over, even if people do still sometimes talk about it two decades later. So why write about it?

The original HALLOWEEN is a genuine classic, virtually an essay on very basic, elemental horror. Its overall influence on horror cinema to date must, however, be judged as quite negative. The movie spawned the mostly unfortunate slasher cycle, which became a boom industry in the '80s that overwhelmed the genre and severely stunted it during those years. The things that made the original work--the visual stylings, the consistently menacing atmosphere in an utterly everyday setting, the suspense, the killer-as-projection-of-the-mind and so on--are almost all ignored by the subsequent FRIDAY THE 13th and its legion of imitators. Among those imitators are, unfortunately, also numbered the HALLOWEEN sequels. The slasher films as they emerged in the '80s began as stupid, chromosome-damaged throwbacks (and not in any good ways) and a decade of inbreeding had only worsened their condition. The year before H5, there had appeared HALLOWEEN 4: THE RETURN OF MICHAEL MYERS, which perfectly mapped out the genetic degeneracy. H4 was a top-to-bottom, by-the-numbers generic slasher flick, a flat piece of cardboard cut to specs without a single original element or anything beyond the title that could effectively differentiate it from the by-then wretchedly degenerate herd of slashers. It plays like an unintentional parody. And it made a bloody fortune. A lot of misguided souls still regard it as the best of the many HALLOWEEN sequels, remakes, reimaginings.

Fast forward a year and H5 appears, offering a different angle. Though still operating within the parameters of the slasher sub-genre--too much so, really--H5 tries to bring back something of the spirit of the original film and to take the series in some new and interesting directions instead of allowing it to follow the rest of the slashers into continued degeneracy and death. The movie is partly hobbled by its creators' decision not to sufficiently deviate from what had become the slasher formula. Like its predecessor, it panders to the conventions in offering a body-count of extraneous characters who are, as usual, written as little more than one-dimensional targets and, as usual, brought to the screen in "performances" with which the entire concept of "acting" is degraded by association. This is, fortunately, only a small part of the overall film. For the most part, the experiment is a success. The film certainly isn't great--that would be far too much to expect for such a project--but it's light-years ahead of its immediate predecessor in nearly every respect. And it bombed, and is, to this day, still frequently reviled as a notorious waste of celluloid.

It's enough to make a loving cinephile start to wax existential over the tragic flaws of contemporary human society.

Well, maybe one who had lost all sense of perspective. The rest of us were content to grumble and perhaps curse a bit against the conservatism of too many horror fans. We'd been doing that all through the '80s anyway. And it is, after all, just a slasher sequel.

One of the key elements of the effectiveness of the first film is the effort expended to make its scenario plausible. Viewers could directly relate to the film because it stripped away most of the elements that had so often served to distance an audience from the dark fantasy on the screen. In HALLOWEEN, the killer wasn't some mythical creature who stalked some 19th century Euro-Fairlyland, he didn't sprout hair and fangs by the full moon, he wouldn't disintegrate if religious trinkets were brandished against him. He was a serial killer, someone whose mind had snapped and left him with some strange impulse to kill. It's a specimen of human with which modern society at the time of the film was becoming all too familiar. His slaying ground was an ordinary neighborhood in an ordinary suburb in contemporary middle-America.

At the same time, those in the film spoke of him in mythic terms. His psychiatrist, Dr. Loomis, calls him "Death" and says he isn't a man. The children offer the real myth in play in the piece though; they call him the Boogeyman. Visually, he's presented as a sort of living embodiment of a shadow, our fear of the dark personified. He seems to be everywhere, always out of sight, always watching, always waiting for his chance to strike. These mythical elements in the narrative and visuals create an unrelentingly menacing atmosphere. At the same time, every viewer knows there's no such thing as the Boogeyman. Myers is an extremely dangerous man but he's just a man; that's part of what makes him so creepy. This juxtaposition between the plausible and the mythical continues throughout the film, generating a marvelous tension that finally comes to fruition in the end when Dr. Loomis finally catches up with Myers, whips out a pistol and apparently blasts the killer to oblivion. When Myers manages to get up and walk away from this, it was such an incredible and creepy moment that the film ended on it.

In the slasher cycle that followed, the "plausibility" part of the equation was jettisoned almost immediately. The familiar settings were kept but the killers, though supposedly human and in human form, became superhumanly strong and inexplicably indestructible. By the time H4 rolled around, Michael Myers had become an unintentional parody of the depths to which such characters had descended in the cycle. Possessed of the strength of Spider-Man, the invulnerability of the Hulk and a padded-out costume to show it, he doesn't bother to do much stalking--he just comes right at his prey like a battle-tank and is even more difficult to damage. He shoves a shotgun completely through one victim. He punches his bare finger through a man's head. He stands stock still while a guy smashes him in the head with a rifle, ballbat-style, without injury or even reaction. He singlehandedly liquidates an entire police station full of armed cops and absorbs more lead than the dirt hill on a shooting range, again all without effect.

The slasher formula had been run to ribbons years before H4 and the movies' strict adherence to it precludes wringing any suspense out of the events on screen. The characters are awful, the performances atrocious, the ending nonsensical. There isn't a single original or interesting touch in the movie.

The next year when H5 arrived, there were still some useless characters thrown in as targets and they were still poorly essayed, but these tips of the hat to the slashers, which take up very little screen-time, are H5's most serious flaw. Director Dominique Othenin-Girard tried to return the series to its roots. Myers steps back into the shadows and becomes the methodical stalker again. Though he takes some abuse, there's no more Super-Mikey the Battle Tank. The film is full of great flourishes and memorable scenes. Myers is humanized. Rather than merely a killing machine, he's someone with whom Loomis tries to reason, someone who experiences a moment of hesitation when poised to kill his niece. He even removes his mask and sheds a tear at the thought of the terrible things he's being driven to do by that evil something in his mind, which is a particularly nice touch--the thought that something like a human being is trapped somewhere in this automaton makes the character much more interesting, his plight horrifying. There are some fantastic moments of suspense; his niece hiding in a laundry chute, a car-chase across a field, one of the characters taking a ride in a car with a masked man she assumes is her boyfriend but who is actually Myers. Donald Pleasance's long-suffering Dr. Loomis manages a spectacular final take-down of Myers near the end. Throughout the film, a mysterious stranger is in town watching these events unfold. At the very end, just when we think it's all over, he breaks into the police station with explosives and automatic weapons and springs Myers. H5 was packed with great moments that were worthy of the original and it created hooks upon which subsequent writers could have built for quite some time.

Unfortunately, it just wasn't to be. The film bombed, was written off by many as a stinker and the return to business-as-usual H4 territory with the next entry marked the death of the original series.

I've sometimes wondered--when I find enough spare time to ponder such stupid questions, anyway--why H5 was so often reviled while the awful H4 was praised. The only answer I've ever found is that it dashed expectations. People went from H4 to H5 expecting another mindless, generic slasher flick like H4 and got, instead, something a lot closer to a real movie. Dashing expectations--even such low ones--can be dangerous. Look at what happened with Ang Lee's HULK. People went into it expecting two hours of a brainless monster breaking things and as a consequence, one of the better comic adaptations in the history of comic adaptations is still, to this day, often written off as an atrocity on par with turkeys like ELEKTRA and CATWOMAN. It seems unconscionable to punish a film for being far better than anyone expected. That it sometimes happens is extremely unfortunate and sends a terrible message to filmmakers ("don't even try to do anything better or original").[*]

Maybe that's why I thought it was worth the time to write some remarks on H5. Maybe--and here's an even more ambitious notion--I thought I should because H5 suggested how the always-awful and by-then-moribund slasher flick could have evolved into something worthy of the film on which it's printed. It's like a road that could have led to better things but wasn't taken. Maybe I wrote about it just because it's a slow Sunday, and I felt like it. Whatever it is, I've said my piece.

[*] In general, the film's detractors offer a small, standard litany of gripes (a product of detractors repeating and feeding off one another ad infinitum). These gripes divide into two genres. The first, and by far the most prevalent, is Stupid Complaints About Things of Little-To-No Consequence. The Myers mask is different, the filmmakers changed the interior of the Myers house from the first film, the comic-relief cops are awful, and so on (though the cops are certainly a mark against the film, they probably don't take up, collectively, 3 minutes of screen-time). The second genre is The Bastards Did Something Different. Pretty self-explanatory--the efforts at a little more psychological depth, the mystery of the man in black and pretty much anything else that made H5 more than another FRIDAY THE 13th clone like H4 stand condemned under the heading. Making Myers an actual character with some humanity instead of just an empty, murderous automaton gets a lot of abuse.

If, after listening to an H5 detractor rattling off this litany, the reader is left with the unmistakable impression of someone grasping at straws in a desperate effort to justify their hatred of a movie that doesn't earn it, the reader is paying attention. HULK gets the same treatment from its critics and for the same reason.
Posted by cinemarchaeologist at 6:21 PM