"Nah": What Comes After THE WALKING DEAD's Latest Dumpster Dive? 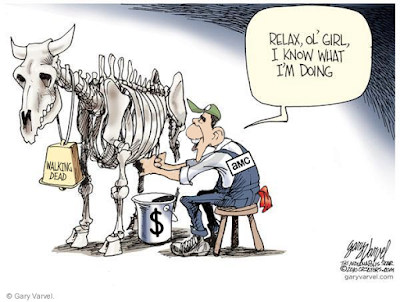 I've been slacking in my WALKING DEAD reviews this season. I've been in a real rut when it comes to writing anything recently and TWD doesn't exactly inspire. After a season opener chock-full of TWD's usual idiocy, which at least gives one something at which to poke fun, the series has settled into an astonishingly bland run of eps about the characters' efforts to repair a bridge and how this has been complicated by the Simmering Tension between the Saviors and everyone else. The writers tried to squeeze in a mystery wherein someone was bumping off various Saviors who were hauling critical supplies. This suggested someone was trying to cripple the other communities and maybe incite another war but it was eventually revealed that it was just some of the ladies from Oceanside carrying out revenge killings against the Saviors who murdered their men. Fair enough--revenge killings of this sort would be a regular occurrence on a competently-written TWD--but while the writers probably thought they were throwing in a red herring when it came to the supplies, the fate of those supplies was never addressed, the implication being that Oceanside is simply keeping the stuff (which gives the murder-spree a rather different character).

The last few eps have seen the writers repeatedly setting up storylines then, with tonight's installment ("What Comes After"), deciding to abandon them.

Last week, Maggie sets off to the Safe Zone with the intent of finally killing Negan. The Godfatheresque final moments of the previous season ender suggested that Simmering Tension over Rick's refusal to kill Negan would play a central role in this year's story, leading Maggie to assert Hilltop's independence and try to usurp Rick's leadership role, but after setting this up in such an overbearing way, the writers apparently just decided "Nah." Maggie, who, for no real reason at all, had already backed down from her more hardened stance re:the Saviors, had a brief confrontation with Michonne at the door to Negan's prison, confronted Negan then decided he was so pathetic, she wasn't going to kill him. And that was the end of that.

That this went nowhere lends an amusing twist to Rick's story.  Upon hearing that Maggie was heading to the Safe Zone, Rick deduced why and hitched a ride with Daryl, hoping to beat her there. Daryl is in on Maggie's plan, though, and misleads him. The two briefly scuffle and, like the show itself, end up falling into a hole and getting stuck there. The many versions of Rick have been written as complete idiots for years but in his handling of the Saviors and Negan in particular, this Rick has been written like a seriously deluded fool, insisting that, in memory of Coral, Negan remain alive and that the other communities accept and live in harmony with the Saviors, the thugs who murdered, pillaged and terrorized them. The writers seem oblivious to how far they've put his head up his own ass over this; they have Rick willing to fight his best friend, who has been with him throughout the entire zombie apocalypse, over the life of the mass-murdering Negan, and still write him as if he's pursuing some righteous dream of a better future for doing so. And, of course, it all turns out to be for nothing, as Maggie opts not to kill Negan anyway.

While Rick and Daryl are in that hole, a large group of Saviors show up at the bridge work-camp intent on liberating a cache of guns from the representatives of the other communities. The two sides square off, then, as shooting begins, the action cuts away. And it never cuts back. This was set up as a major stand-off, a full-blown Savior rebellion that had been brewing for 4 eps. It finally comes to a head and, with the lives of Carol, Jerry and several other characters in the balance, the writers say "Nah" again, and we're never shown what happened.[1]

Instead, the whole thing is just used as an excuse to have some shooting that attracts a pair of nearby zombie herds. Rick and Daryl make it out of that hole with zombies falling in on top of them. Rick decides to hop on a nearby horse, a runaway from the fighting, and try to lead away the herd that is closing in on them, though Daryl has his motorcycle, which would be much better-suited to the task. Rick leads the zombies up a road but when he comes to a turn, he finds the second herd bearing down on him from that direction. With nowhere to go, Rick wheels the horse and it spooks and throws him. He lands on a pile of rubble randomly deposited on the side of the road[2] and is impaled through his side on a piece of rebar. Last week's ep ended with the zombies closing in while he was pinned there. Tonight, he very implausibly manages to free himself, hop on the horse, which, after being so frightened, is just sort of milling around, and exit down a zombie-free road that suddenly appears before them, as what had previously been presented as just a turn in the road is revealed to be, instead, an intersection. It's a cheat via staging and editing; if the road just continued through the intersection all along, there would have been no reason for Rick--and the horse--to panic.

AMC has been promoting this as "Rick Grimes' final season." A few weeks ago, I wrote of this:


"Andrew Lincoln is supposed to be leaving the show after this season and AMC's promotional materials reflect this, though it wouldn't be at all out of character for TWD to merely be using this as an attention-grabbing ruse along the lines of Glenn's infamous dumpster dive a few years ago. There's no way Rick can just be made to leave; to be rid of him, TWD will have to kill off the character, their central character from TWD's first screen moments. AMC's greed is infamous. Its execs show every sign of wanting to milk this cash-cow right into its grave and beyond. But the smart ones--if there are any--must see the writing on the wall. Last week's ep, a season opener, drew the smallest audience since the show's 2nd season. The numbers, taken in the abstract, are still impressive for a cable series but anyone but the die-hards would be hard-pressed not to concede TWD is a fundamentally broken show that has been, in effect, dead for years now. Killing Rick can only further devastate the ratings. Continuing without him would be like the Ringling Bros./Barnum & Bailey Circus without the elephants (and would go over just as well). AMC should wrap up the series while Lincoln is still on board and try to give it some sort of dignified ending.

"Do I think that will happen?

Though tonight is only the 5th ep of the season, it was supposed to be the last Rick ep, but I certainly called it right.

Rick wanders around on the horse,[3] bleeding enough to kill an ordinary man a dozen times over while deliriously conversing with ghosts from his past. Shane, Hershel, Sasha--they mouth pleasantries that add nothing to the show except running time. By the end, Rick is staggering across the newly-repaired bridge, the massive zombie herd behind him. Our other heroes, presumably alerted by Daryl, show up but with Rick dying on his feet, they then run away to try to spare the bridge by diverting the herd. No one goes to Rick's aid! Daryl, who is beside and slightly below the bridge, snipes several zombies but he doesn't rush up the hill to help Rick either--he doesn't even move from his position. It's utterly inexplicable that our heroes would leave a very large cache of explosives laying around right in the middle of the bridge they'd just repaired, particularly with the Saviors rebelling and looking for weapons, but tonight, for no other reason than that the writers decreed it, there it was--a zombie knocked over a box, the lid came off and it was full of dynamite bundles. Rick shoots it, sets it off and the bridge--and apparently Rick himself--are blown all to hell, the burning zombies plunging into the raging river below. 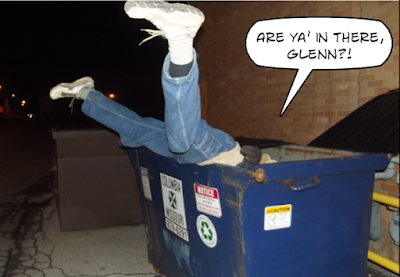 Then the writers pull their last "Nah." Rick didn't die in the explosion. All that hype turned out to be another dumpster dive, as Rick was, instead, blown into the river, sent hurtling down it without drowning or being eaten by the dead (who somehow do seem to have drowned) and just happens to wash up on shore right where Jadis/Anne was standing, waiting for her mysterious helicopter people to pick her up. She has them patch up Rick and the helicopter flies off with him on board.

The last thing we see is a flash-forward scene wherein the show time-jumps at least 5 or 6 years into the future, maybe more, and the previews for next week make clear this is the new status quo. In the opening moments of TALKING DEAD, TWD executive producer Scott Gimple revealed that, contrary to all the hype regarding Rick's "final episodes," Rick's story will continue via a new series of movies AMC will be producing. Instead of letting this worn-out show die a peaceful death, Gimple describes this as a major expansion of the TWD "universe," that word every movie and tv studio in this MCU era loves. If Gimple had anything to say about how this essentially renders an entirely pointless exercise every episode of the season to date--over a third of the season--I didn't stick around long enough to hear it.

One gets the strong impression that this season was initially supposed to be very different and then, at some late point during production, the creators faced some sort of crisis and had to radically alter their plans. The eps prior to this were definitely building a story, even if it wasn't terribly engaging. "What Comes After" not only abandoned individual storylines, it abandoned the entire season. But for some intervening behind-the-scenes problem, it would have made much more sense to simply begin this season after this latest time-jump. Rick's "death" is the only event that has happened so far that will have any impact on anything that comes after, and that could have just as easily been filled in via flashbacks. As it is, these first 5 eps are now an island of entirely inconsequential filler in a sea of time--about a year-and-a-half between the end of last season and the beginning of this one and 5 or 6 years between last night's ep and everything that is to come. And AMC's immediate sequel to this latest expression of contempt for the audience is to double down on the franchise.

Perhaps the next "Nah" we'll get will come from viewers.

[1] Only, a bit later, something of its aftermath; at one point this evening, Rick stumbled into the work-camp and found it abandoned except for some zombies. Presumably, these are the people who were killed in the confrontation, though they're sporting make-up jobs that make them look as if they've been dead for months. At the end of the ep, Carol turns up with the other characters, so at least she survived.

[2] This is apparently, the debris from the mysterious Hulk zombies that wrecked the bridge in the first place then were never explained.

[3] TWD definitely isn't noteworthy for particularly interesting cinematography but it does occasionally manage to pull off a spectacular image, and there was a really good one tonight, Rick, on white horse, leading what seemed to be an infinite army of the dead: 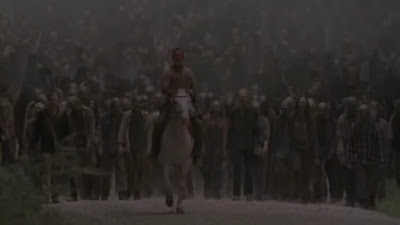