THE WALKING DEAD's Service Without A Smile 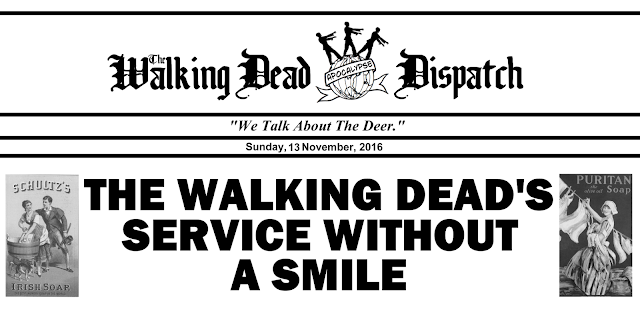 So far, the 7th season of THE WALKING DEAD has achieved Mazzara-era levels of filler. The sole substantive plot-point of the opener was a few minutes that should have been covered in the season 6 finale, instead stretched until it burned through an entire episode. Week #2 introduced the Kingdom but most of the running-time was again spent on entirely extraneous material. The third was entirely extraneous; viewers can simply skip the whole affair without having missed a thing. Tonight's installment returned to the show's main cast with a 90-minute episode but if anyone thought the extra half-hour would mean the writers would finally have to actually write something, they haven't been watching TWD long enough. "Service" turned out to be yet another one-line plot: Negan's first visit to the Safe Zone.

When he first appeared, I got a kick out of Jeffrey Dean Morgan and his reveling-in-his-own-ruthlessness rendition of Negan. Unfortunately, it seems the TWD creative team did as well. Apparently so pleased with having found something that actually worked for a change, the writers have managed, in only a few eps, to turn an initially entertaining villain into a one-trick pony who has already worn out his welcome. The Negan Routine: Negan shows up, offers through a smile a way-over-the-top, villainous, mocking monologue in which he seems very entertained with himself, gets in the face of anyone evincing any defiance and threatens them until they back down, repeat. In only three eps in which he's so far appeared, the character has run through this same routine perhaps a dozen times, half of which were in tonight's show. Negan is likely to be a regular cast-member right to the end of this series and he's already a tired cartoon.[*]

It doesn't help matters that all of his men who have been given any sort of attention have behaved in a similar manner. They get in people's faces, posture and act menacing while offending the dignity of their victim but without any of their boss's flair. We've been getting essentially this same scene from them since they first appeared last season. We got it several times last week. We got it several times tonight. TWD has, of course, been chronically recycling itself for a long time now. In the Mazzara era, the show would routinely repeat the same scene over and over again. These eps don't just take things back to those bad ol' days, the repetition here is much more concentrated--not only the same beat but the same moment recycled over and over again in the same ep, ep after ep, while little else is going on

TWD's Idiot Plot problems were again front and center. Rick, knowing Negan and his men are coming to rip them off, has days to prepare but doesn't do the first thing to hide any guns or supplies in advance of the visit; he doesn't have any plan at all. Is Rick an inspiring leader or what?[1] His total capitulation to Negan is also a bit of a narrative hole. Last season, it was implied that Negan has a substantial force but his men proved to be a bunch of dimwits whom Rick and co. easily defeated in every encounter. How lousy at villainy do you have to be to get repeatedly trounced by the zombie apocalypse version of F Troop? Even when Negan finally caught our heroes, he only had maybe 30 or 40 men on hand and talked about the extraordinary resources this constituted. Tonight, Negan turned up with about 20 of them. There's no reason at all why the Alexandrians, who were exceptionally well armed, couldn't wipe them out as well, taking the head of the serpent in the process. Rick spoke of Negan having overwhelming numbers. Such numbers are nowhere in evidence.[2] While Negan's thugs are stealing things, Coral displays his intelligence and experience by drawing a gun on one of them and making threats. As a consequence, Negan decides to cart off all of their guns. And, it turns out, our brilliant heroes keep a complete list of their firearms holdings that the villain can use to make sure he got all of them![**]

Some other items: Michonne is shown practicing with a rifle. She's lousy at it and repeatedly misses the zombie at which she's aiming but manages to accidentally nail a deer in the distant forest! It appears to be throat-shot but obediently lies down and dies right where it was hit, the way real deer do when shot. Negan lieutenant Dwight has apparently cracked the secret of the teleportation abilities so often displayed by TWD's zombies. When he makes off with Daryl's motorcycle, he cranks it, moves out of the immediate frame and vanishes into thin air, the sound of the bike's engine abruptly ceasing and his retreat nowhere in site when the camera angle immediately cuts to show the road on which he allegedly left.

As badly written as this review feels--and sorry, folks, it's been an awful week and I just ain't feelin' it tonight--it's still award-worthy by comparison. Lebeau, if you're out there, you gotta' bring this one home!

[1] Father Gabriel, one of the least useful members of the cast, opts to fake Beth's death, digging and filling in a phony grave. Neither he nor anyone else thinks to bury any guns or supplies in that empty grave.

[2] This may be a consequence of budgetary restrictions but seeing as how everything is now premised on it--this allegedly overwhelming force that is nowhere in evidence--it is a problem.

[**] UPDATE (14 Nov., 2016) - Negan's men displayed these same teleportation abilities, along with clairvoyance, in the season 6 finale, when the things they do are entirely impossible absent these superpowers. Perhaps they're more formidable than I give them credit for being.