The Cellulite On THE WALKING DEAD 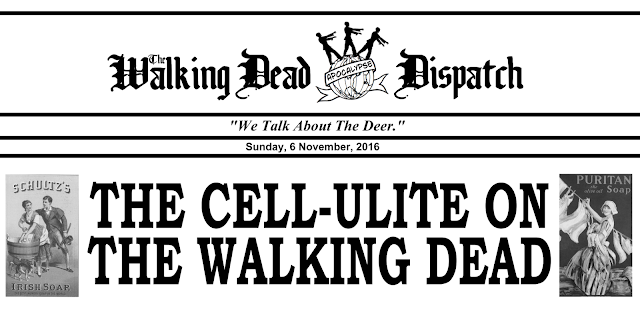 "The Cell," tonight's installment of THE WALKING DEAD, was just another filler episode. It didn't manage to get back to the main cast (again) or the Safe Zone cast (which hasn't appeared at all yet this season) and there was nothing of the Carol/Morgan/Kingdom subplot that was allowed to pointlessly consume last week's ep. Lacking any sort of competent pace or plot progression, it burned through an entire hour with nothing but Daryl as Negan's prisoner, mostly locked in the cell of the title and learning how Negan's people are loyal and fearful of their boss--stuff viewers already knew. Even Negan's trademark sadism was pretty reserved and ho-humm. The second bottle ep in only three eps so far this season, it seemed packed with an unusually high number of commercials, though it always seems that way when nothing is happening.

There isn't much to say about the ep beyond that. At one point, the door to Daryl's cell is left unlocked, he discovers it and having apparently never seen the 10,000 or so previous tv shows and movies in which this same device has been used, he goes right out and tries to escape. It goes about as well for him as it did for the previous 9,999 who tried. In a development I'm sure left every viewer speechless with shock, Daryl ultimately refused to give in to Negan. Nothing that happened here progressed the story so much as an inch. The unbreakable hero Daryl remains the unbreakable hero Daryl (and only has two lines of dialogue in the entire ep centered on him), Dwight remains the conflicted villain's henchman, we get hit over the head again with the fact that Negan rules by fear--is there any chance anyone, even TWD's fans, isn't clear on that one yet? While Daryl is trapped in his cell, Negan's men pipe in the same loud pop tune in an endless loop to torment him. It inadvertently offers a perfect metaphor for this ep, which viewers could freely skip without having missed a thing.

Next week promises a return to the main cast for a 90-minute ep, meaning all the material a competently edited series would have intercut with the previous two eps is going to be jammed into one overly long one in which, in all likelihood, very little will happen.