From Start To Finish, THE WALKING DEAD Drags

Tonight's WALKING DEAD turned out to be another rather dull affair. The damaged tower outside the wall chose the final moments of the previous ep to fall and take out a portion of the safe zone wall, allowing in the dead. "From Start To Finish" consisted of everyone fleeing the wave of the dead, taking shelter in various houses then mostly just standing around engaged in some of TWD's patented stupidity and making some of TWD's patented speeches instead of doing anything about their predicament.[1] Near the end, Rick suddenly remembers the ol' cover-yourself-in-zombie-stink-camo trick and his group walk out the door between the zombies. The end.

That's the 10 minutes worth of plot that was used to fill tonight's ep. Some of the details:

Glenn arrived outside the safe zone in the last episode. He saw the tower fall and the zombies enter town. An obvious course of action would be to walk back to one of the many cars that, during the herding operation, the Alexandrians parked a short distance from the zone, drive it up, lay down on the horn for a bit and try to lure the zombies away. Instead, he just stands around throughout the entire ep, speechifying with Enid, watching the zombies to-ing and fro-ing, doing nothing.

Rick is the only one who even addresses a potential course of action, if one can apply that label to what he suggests. He wants to stand around and do nothing for a while until, hopefully, the dead bunch up somewhere convenient for him, he can slip out and get to the armory without being eaten and maybe use flares to draw them away. No hurry, though. Rick could, of course, do this right away using the zombie-stink camo trick he employs 20 minutes later--no need to lazily wait around while people elsewhere in the zone are probably fighting for their lives and dying--but TWD is still lost in self-parody mode, so as has been the case throughout this season, memory of that particular technique is turned on and off depending on whether its convenient to what the writers want to arbitrarily happen next. If Rick were to do this right away, it would preclude burning through yet another ep with idle chatter, therefore Rick only thinks of it near the end when his situation deteriorates.

His situation deteriorates because Ron, being an idiot, is all teen angsty over what he sees as Coral trying to steal his girl and with an army of the dead outside (and he's trapped inside with, among others, Rick and Michonne), he decides that's the perfect moment to try to kill his rival for Enid's hand. Only on TWD. He makes his move and in the utterly pointless struggle that ensues ends up smashing a door and letting the dead into the home in which he and most of our heroes are holed up.[2]

Morgan and Carol end up in the same place together. Carol gets it in her head to go downstairs and kill the Wolf whom Morgan has stashed there. Morgan decides he won't let that happen. There's a brief struggle, Morgan strikes down Carol, even though she'd earlier suffered a concussion,[3] the Wolf gets Morgan's stick and brains him with it then manages to escape with a gun and the town's doctor in tow.[4] The Wolf  had promised to kill everyone and having him simply leave without harming anyone after he'd gotten the drop on his captor and five others reeked of a major cop-out, an effort to keep Morgan around a little longer.

Whenever a TWD finale comes along, be it mid- or full-seasonal, the primary question on everyone's mind is "Who is going to die?" It would be nice to have a TWD that encouraged people to look forward to watching for some reason other than what "shocking" death will happen in the finale. This time around, Morgan was the only major player who had been overtly set up for death but I've thought it quite unlikely he'd have finally been brought on as a regular only to be destroyed so soon. My instincts proved correct; TWD opted for a redshirt. Earlier this evening, Arnold Blumberg, the "Doctor of the Dead,"[5] was on Twitter running a poll on "who's going down tonight." I chimed in with my guess: 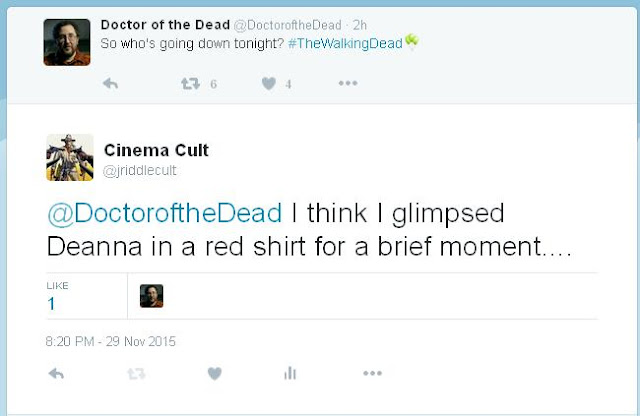 ...which turned out to be correct. Deanna has been doing little more than standing around making grotesque faces and, worse, plans for the future lately. If the axe was going to fall on one of the minors, she was the obvious pick. She was bitten by a zombie near the beginning, spent the ep dying and engaging in the usual Dying People cliche's (giving last speeches aimed at imparting hope to those who will go on, writing notes to those left behind, getting to see the baby "once last time," etc.)[6] and ultimately went out like an idiot, wasting the ammo she'd intended to use on herself on the zombies approaching her, thus ensuring she'd suffer a needlessly horrible death being eaten alive by rotting monsters. No loss there.

The paper-thin plot for this entire season has taken place over a period of only about 24 hours and for weeks, TWD has been merely waging a delaying action aimed at doing as little as possible in order to stretch that plot to the bigger-audience finale. It's a rut into which the series has always fallen. In the end, this midseason finale arrived and we were given what looks more like just another delaying action.

[1] I'm not sure what sort of mind one must have to sit through this ep without greeting the characters' actions with utter incredulity. Everyone runs into houses but no one looks for potential weaknesses that would allow the dead access. Because of this, no one bothers to attempt to barricade any potential weak spots until the dead are already breaking in. For all the talk, talk, talk that consumes much of this ep, no one in any of the various groups talks about what they can do to deal with the situation--the thing that should be foremost on their minds. Only Rick gets a few throwaway lines regarding a potential plan but he's in no hurry. In what should be a fairly extreme emergency, there's no sense of urgency at all. As usual.

[3] Carol suffers a concussion because, when the monsters break into town, she runs and--yes--falls, one of the particularly worn horror movie cliche's; by my count, TWD has used it three times this season. At least she didn't twist her ankle.

[4] The way in which he gets the gun and escapes is bullshit. the Wolf is hemmed into a corner with both Tara and Rosita pointing guns at him while he holds up a knife and threatens to stab the town doctor. In such a situation, one could see Tara giving up her weapon; she's a civilian and one with a personal stake in the matter--but Rosita could have dropped the guy before he even flinched. She doesn't strictly through arbitrary plot contrivance.

[5] And btw, Blumberg's "Doctor of the Dead" podcast is great, even if he is more of a fan of TWD than he should be.

[6] Deanna, who is on her death bead, gets up to see baby Judith that one last time. Rick walks up to check on her, sees Deanna is no longer in her bed then goes into the baby's room to find Deanna hunched over the crib--figuring Deanna had already died and turned, he rushed to kill her, stopping at the last moment when he realizes she's still alive. It provides for a cheap jump-scare and the "see the baby one last time" melodrama but how stupid can Deanna possibly be? She's probably only minutes away from death which will turn her into a flesh-eating monster and she goes into the baby's room?
Posted by cinemarchaeologist at 11:33 PM