WALKING DEAD Heads Up, Thumbs Down

THE WALKING DEAD got around to addressing some of the dangling plot-threads it's been avoiding through its last three filler eps but the midseason finale isn't until next week, so even as the series finally starts to deal with these matters, some of which have been left dangling since the first and second eps of the season, the padding required to drag things out to that bigger-audience ep is profuse.

The opening moments of "Heads Up" reveal that--surprise, surprise--Glenn did indeed survive his predicament from "Thank You"; he climbed under a dumpster and hid there until the zombies left. When he crawls out, Enid, who left the safe zone after it was attached by the Wolves, is somehow instantly on the scene to helpfully throw him some drinking water. Absent the use of magic, of course, she had no way of knowing he was under there. Her being there, of all the places in the entire world she could have gone, and finding him just as he emerged is just another of those cosmic coincidences that have become increasingly common this season.

Back at the safe zone, Rick sees Maggie standing watch atop the wall, looking to the west, from whence, she hopes, Glenn will soon return. He mounts the wall and offers her a speech. "When we go out there, it's never easy. It's never simple. It's always a fight. But we've come back from harder things from further away. Glenn, Daryl, Abraham and Sasha, they will too." And so on. As if Maggie is entirely unaware of these things. A hefty helping of screentime-burning low-grade melodrama for the audience but, of course, completely ridiculous as any sort of verbal exchange between these characters.

The scene happens, as noted, while the two of them stand on the wall in plain sight of the gathered dead below. Two eps ago, Rick made a big speech in which his suggested course of action for dealing with the zombies surrounding the town was for everyone there to be quiet and remain out of sight and perhaps the zombies would simply move on. An uncharacteristically good idea from Rick. And, of course, everyone, including, most prominently, Rick himself, proceeded to entirely ignore it. Tonight, we get more of the same. Rick is instructing Ron in the use of firearms and Ron wants to get in some target practice at some of the zombies outside. Rick vetoes this, explaining that the dead outside are spread fairly thin (though only two eps ago, he described the town as completely surrounded by zombies twenty deep) and that he didn't want to risk their bunching up around the source of gunshots, which could result in their overly stressing the wall in that area. He even vetoes target practice in the center of town, which would presumably assuage this problem to an extent. And then shortly afterwards, Rick starts reinforcing the wall, spending an extended period loudly nailing up wood supports on the section of it damaged by the truck collision--the weakest point in the wall.

Viewers, you are being mocked.

Enid and Glenn, meanwhile, basically waste the entire ep. Enid runs away, Glenn chases her down, they argue over whether Enid was going to return to the safe zone with Glenn (something she initially insists she won't do but then relents), then they just dick around, talking, squabbling, no sense of urgency. Glenn is initially terribly concerned about the fate of his wife--the last he heard, zombies were marching on the safe zone--but that seems to go right out the window to make room for this business. And everything that happens between he and Enid is pointless contrivance, there only to eat up screentime. Glenn has absolutely no reason to either pursue her or to insist she return with him; she clearly knows her way around and can take care of herself. Once he's brought her to heel, he's presumably set on immediately returning to town but instead, for no apparent reason, they go in the opposite direction, which appears to be just another geographical foul-up by the writers. A few weeks ago, in my piece about "Thank You," I dealt with the significant geographical problems introduced in that ep. I've prepared a somewhat crude map[1] to illustrate some of them: 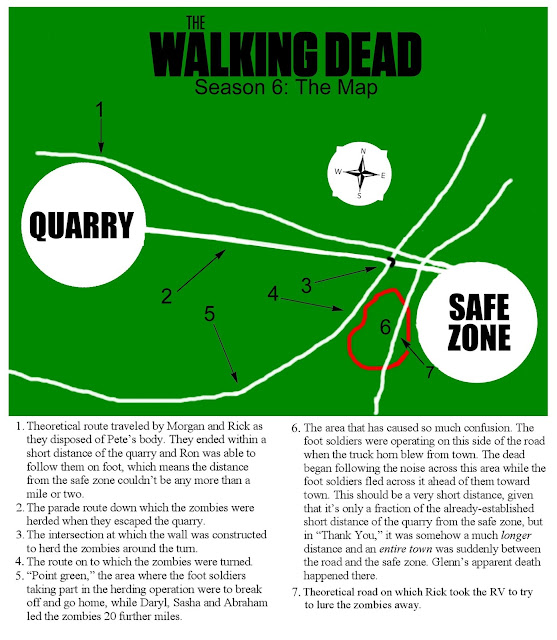 Glenn's apparent death happened somewhere in area #6, yet he and Enid, in supposedly traveling back to the safe zone, end up at point #5, where Enid begins to play with the helium balloons our heroes stashed there as part of the zombie herding operation. The two banter. No hurry.

Rick and Morgan finally have a sit-down about Morgan's problematic "all life is precious" philosophy. It's handled much better than one would expect from TWD. Rick learns the Wolves that Morgan allowed to escape were the ones who attacked him and shot up the RV, which killed his plan to lead the zombies away and resulted in the town being surrounded. Morgan confesses he just doesn't know if he can follow his philosophy in this zombified world. Morgan doesn't tell anyone about the Wolf he captured though and in a bit of absolutely unconscionable behavior, he goes to the infirmary and procures precious antibiotics for the homicidal maniac he's keeping locked up. Carol catches on but the ep cuts away before she learns exactly what he's done.

More padding: Rosita teaches a "class" of Alexandrians about how to use a machete, Spencer tries to go off on his own in an effort to lead the zombies away, is nearly eaten and has to be rescued and so on--more events present solely to eat up screentime. After being so generally dreary, "Heads Up" ends on a pretty good last image (though the lead-up to it is marred by another cosmic-scale coincidence) but that can't make up for the fact that a viewer could skip from the third ep of this season to this one without having missed a thing (and most of what happens in this one could have been done in 20 minutes).

[1] As crude as it is, it does manage to incorporate every bit of information we've been given about the area. If I've missed anything, I'm sure eagle-eyed readers will spot it. There is a dried-up creek somewhere along the route taken by Rick and Morgan when they were disposing of Pete's body--a bridge passes over it. There isn't enough info to plot its course and it doesn't matter, so I've ignored it.
Posted by cinemarchaeologist at 1:39 AM