The Geography of THE WALKING DEAD

A few days ago, I put together a post over on the Internet Movie Database about the geography of THE WALKING DEAD. In this week's episode, "Clear," Rick had revisited his hometown, and, consequently, there had been a lot of talk on the TWD board about exactly how far that town was from the prison at which our heroes are currently encamped. My post was an effort to disentangle some of the questions of geography, at least insofar as they could be disentangled. It led to a relatively productive exchange, which is a rare thing, indeed, for the TWD board these days. "Fabiopepper," a non-U.S. viewer of TWD, said it had helped clarify, for him, where the events depicted on the show were happening. That sounds like a more general vacuum that could use some filling, and, having a little time on my hands, I decided to expand on the discussion here. Even created a little map.

The big caveat to everything I'm about to do here is that TWD's creators do not, at times, seem to be using the real geography of the state of Georgia. They use the names of real places, and often seem to be referencing the actual locations, but there are exceptions, and the reader should keep that in mind. 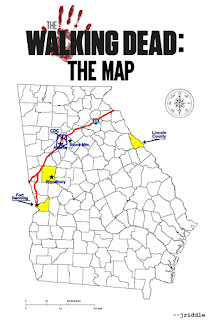 One of those apparent exceptions occurs in the opening moments of the TWD pilot. Lincoln County police are in pursuit of a group of armed no-accounts, and request assistance from King County law enforcement. King County is a wholly fictional place where Rick and Shane live and work as sheriff's deputies. In the pilot, they get the request over the radio and go about setting up a roadblock to apprehend the fleeing felons. Just before the chase-in-progress gets to them, a radio dispatcher identifies its location as "2 miles west of Interstate 85." As you can see from the map, though, the real I-85 runs nowhere near the real Lincoln County, and county cops chasing anyone "2 miles west of I-85" would have been several counties out of their jurisdiction.

UPDATE (12 March, 2013) - IMDb poster "schatten42" points out that it was Linden, not Lincoln County police requesting assistance in this chase, and, upon review, he's correct. In making the map, I relied on captions that incorrectly recorded the dispatcher as saying "Lincoln County."

The incident does place King County as somewhere along I-85. If, that is, TWD's I-85 is meant to be the real I-85. During that message board exchange, "joeydoobs" noted that "Rubixcube10" had just referenced a new interview with Robert Kirkman in which the TWD creator said "I imagine that King County is always north of Atlanta..." So, to the extent that Kirkman can be taken as a reliable reference,[1] it's at least on the Lincoln County side of the state,and, in a non-zombie-infested world, relatively close to Atlanta, as there's only a little over 90 miles of road between there and where I-85 enters the state in the east.

In season 1, our heroes had made their camp at a quarry on the outskirts of Atlanta. In the episode "Wildfire," Rick makes his daily broadcast to Morgan in the morning and identifies their camp as "a few miles northwest" of Atlanta. Later, in that same ep, the characters, having decided to abandon the quarry, debate the merits of traveling to either Ft. Benning or the Centers for Disease Control and Prevention. Ft. Benning is initially rejected because it's "a hundred miles in the opposite direction." After the CDC literally blows up in their faces, though, they head to Benning. Somewhere along this trek, heading southwest out of Atlanta, they encountered Hershel's farm. The farm is overrun at the end of season 2, they drive for a while in an unknown direction, and set up a camp for the evening only a sort distance from the prison.

The series jumps 8 months between season 2 and 3, and we're told the characters have been moving around throughout that time, traveling in circles, apparently in a very small geographic area. They end up back at the prison. The prison's precise location isn't known, but season 3 establishes it's a relatively short distance from Woodbury. The real Woodbury, Georgia is in Meriwether County,  southwest of Atlanta. TWD's Woodbury may not be intended as the real one, but the real one is in the right place, and it doesn't seem any sort of leap to assume they're the same. Kirkman, in that interview, placed it "south of Atlanta."

Logic usually doesn't play a very big role in TWD, though. Viewers of this week's episode came away with the impression that Rick's hometown must be pretty close to the prison. They're using logic. The prison is threatened with a military strike from Woodbury, one that could come at any moment. Surely the characters--particularly the leader--wouldn't want to wander too far from it under those circumstances. At the same time, a trip of any real length is extremely dangerous in a world gone dead. Viewers quite reasonably concluded Rick's hometown must be pretty close to the prison, but that doesn't appear to be the case at all.

As Rick, Michonne, and Carl were driving to King County this week, they went past a sign someone had left beside the road informing an "Erin" that a group was trying to get to Stone Mountain. Stone Mtn. is slightly northeast of Atlanta, south of I-85. It isn't clear how much further the characters drove beyond that, but Kirkman says 'you're looking at maybe a maximum four, five hour drive" between the prison and Rick's home.

So with the group facing imminent annihilation, the characters drove that incredible distance through a zombie-infested Georgia. Every town through which they moved would have had gun stores and police stations ripe for looting, yet they ignored them all to try to collect guns from a police station from which Rick, himself, had already removed all of the guns back in the pilot.[2]

[1] And that's quite questionable--Kirkman is the co-creator and owner of the TWD comic and, on paper, an executive producer on the series, but though he describes himself as intimately involved in the series' production, he's racked up quite a history of wildly inaccurate public comments about it that suggest he's not terribly involved and is only minimally aware of what's even happening with it.

[2] A few louder-than-observant posters have challenged the idea that Rick removed all of those guns. The pilot didn't offer an overview of the full contents of the police station's army cage, but we see that it's small, we see weapons have been stripped from it, Rick, upon evaluating it, says "a lot of it's gone missing," then later, in the third ep of season 1, tells everyone "I cleaned out the cage back at the station before I left."

Some have asserted this could just be hyperbole, that he may really only have meant he took all he could carry, seemingly forgetting that he had a police cruiser at the time, and could have filled it. Poster "Angel Angelus" points out the only way Rick's comment about cleaning out the cage wouldn't be a direct lie: "Maybe he means he swept and mopped it?"

To accept the premise of this weeks' ep--that there were still guns there--requires believing that Rick overstated things when he noted the cage had been picked over, and that he recognized the value of the guns (one of the most precious commodities in a zombie apocalypse) but is a cretinous imbecile who, with the ability to effortlessly transport everything, chose to leave a big cache of them behind for no reason at all, and that he intentionally lied to the others, without any conceivable motive for doing so.

It's too silly to take seriously anyone who would even suggest it.

The real reason--and the sole reason--Rick made that long, stupid trip to his hometown this week is because the writers wanted to engineer a reunion with Morgan. That's all.
Posted by cinemarchaeologist at 12:53 PM