Among the many errors one regularly finds on THE WALKING DEAD are those resulting from a lack of care taken with the visual continuity. The episode "Home" featured some noteworthy examples, and this little presentation on the subject was one I had in mind last week after it aired. I didn't take the time to put it together for inclusion in my regular review of that ep. I've only just gotten back to it today.

At one point in "Home," Daryl comes to the assistance of some folks being assailed by zombies on a bridge. He slams the head of one of the creatures in the rear hatch of a vehicle, pulping it and covering his own hands (particularly the right one) in gore: 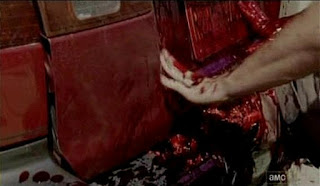 A split second later, he snatches up his crossbow, and his hands are entirely clean: 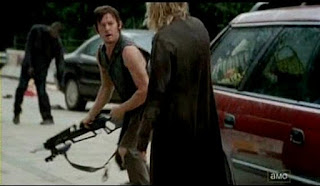 A little later, he and Merle quarrel, and, as he walks away, Merle grabs his shirt, causing it to rip and reveal a network of scars on Daryl's back. Daryl also sports a pair of tattoos extending down from his right shoulder: 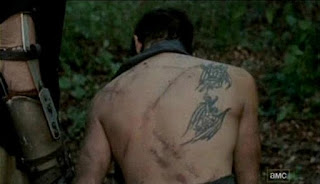 Daryl stands, adjusts his shirt and walks away, and something magical happens! 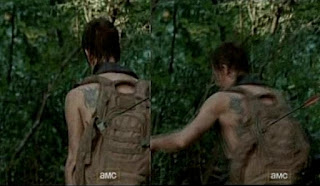 Later in the episode, Hershel goes out to have a talk with Glenn, who is about to take a truck around the front of the prison to search for the long-neglected breach in its walls. It turns into a very disorienting talk for the viewer. Here's the basic geography of the scene, with the truck in the foreground: 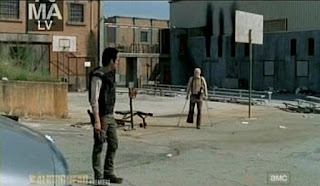 The two walk to meet one another and that geography goes right out the window.

UPDATE (27 Feb., 2013): When I posted the original version of this article yesterday, I'd identified the vehicle in the background of the next few shots as the truck. One of my readers (in the comments section) correctly noted that it is, in fact, the SUV, not the truck. Though this reader missed the point, this makes the visual discontinuity in the scene even worse. I was going to address this in a footnote, as is my habit when someone finds an error, but the nature of the sequence, one building on another, requires a more thorough re-write. To wit:

As the two men talk, the camera cuts back and forth between them. The first time it cuts to Glenn, the truck, which would be visible behind Glenn by the established geography, has sudenly disappeared entirely. The vehicle in the background is the SUV: 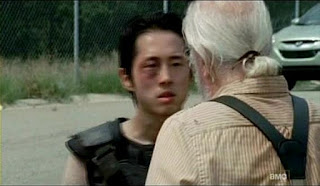 Glenn starts to walk away, then turns back. His new orientation places his right shoulder and Hershel's left in rough alignment: 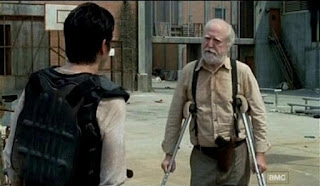 Then, when the camera cuts back to him, neither man has moved, but his left shoulder and Hershel's right are suddenly the ones in alignment. What appears to be the shadow of the truck, which is suddenly in front of them, can be seen on the ground in the lower left part of the frame: 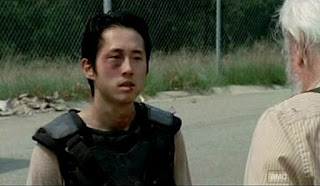 Glenn turns his head to the right, the camera angle shifts the same direction, and something magical happens again. Merle's bike is suddenly parked in front of the SUV: 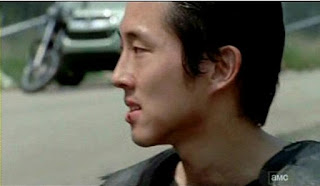 The alignment with Hershel shifts again: 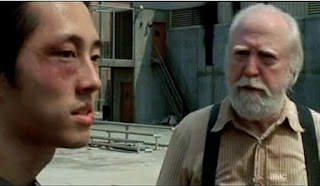 When the camera returns to view the scene over Hershel's let shoulder, the SUV and the chopper have disappeared: 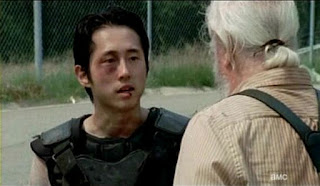 Glenn, having had enough talk, turns and walks away, and suddenly the original geography is restored, with the truck back where it started. 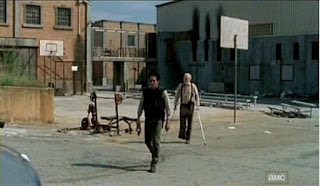 And here's the last shot over Hershel's left shoulder (Hershel having not moved at all): 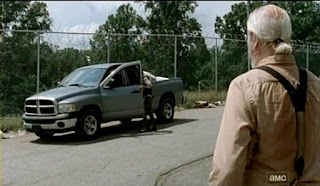 And that's how the camera works on THE WALKING DEAD.

--j.
Posted by cinemarchaeologist at 1:56 PM