WALKING DEAD: "I Ain't A Judas." Or Anything Else

Nothing happened on THE WALKING DEAD tonight. It's true that those tuning in at TWD's regular time sat through through 60 minutes of something entitled "I Ain't A Judas," but 60-minutes of a test-pattern would have been just as substantial. And just as entertaining.

When, in season 2, TWD was reconstructed on a daytime soap model, one of the elements that was inexplicably carried over was said model's glacial pace. Very little happens on a given installment of a soap, and for good reason: the creators have to fill 260 episodes per year--five a week, every week. A prime-time cable series with only a little over a dozen episodes to fill in an entire year (and a substantial budget with which to fill it) doesn't have that excuse. When its creators choose to take 2 or 3 episodes worth of plot and stretch it over the entire season, devoting most of the available running time to filler scenes, it bespeaks, instead, some malignant confection of terminal laziness, lack of talent, and other unsavory ingredients.

In season 2, thirteen episodes were filled with about 3 episodes worth of plot. The plight of Sophia, a one-episode story, became a six-episode anti-epic. The widespread grumbling (and drop in ratings) it produced was interpreted, by TWD showrunner Glen Mazzara, as merely a call for more action. Rather than trying to craft a quality product for a change, he opted to throw zombies at TWD's many problems. The first half of season 3 continued and accelerated this trend. The series offered up a constant stream of gratuitous action scenes in an effort to battle bumpkin boredom and mask the fact that, once again, 2 or 3 episodes worth of plot was being used to fill half the year's output.

Now, it seems, something has happened behind the scenes. I won't speculate as to what or whether it has anything to do with the recently-announced firing of Mazzara. Whatever it is, the effect on TWD has been that the second half of the season has reverted to a Sophia-era slog--in three full episodes since the prison group blew out of Woodbury, there hasn't yet been a single full episode worth of plot. TWD has become, once again, an exercise in doing nothing. Filling time with fluff until, presumably, some big (and bad) season-ending blow-out.

In Woodbury's charismatic GINO the Liam Lesser, our heroes have a real problem, Because he's the designated villain, he only wants to destroy them. They know what kind of crazed enemy they have on their hands, know his resources are substantial. They talk about it quite a bit. And that's all they do. In two episodes, the threat he represented engendered no sense of urgency at all. Urgency finally got some lip-service this week--GINO's attack on the prison probably helped--but other than the idea of running away, they don't even discuss any possible course of action. Even something as simple as fixing the fence is vetoed because, in Hershel's words, "we can't access the field without burning through our bullets" (which is, of course, nonsense). When Merle tries to explain to them the sort of guy they're facing in GINO and what he can and will do to them, given the chance, Maggie suggests locking Merle in another cell-block.[*] Hershel insists "we can't just sit here!" Then, that's all they do for yet another episode.

The characters, written as intelligently as ever, take the idea of "loyal to a fault" to all new levels this week. Rick went foaming-at-the-mouth crazy earlier this season, has had conversations with dead people on a dead phone, saw his dead wife's ghost and started ranting at it while waving his gun around at everyone. He spent nearly the entirety of the last ep running around outside the prison gates chasing that same ghost, and babbling incoherently. This week, everyone is still deferring to him as the leader. Nary a word about his abject lack of fitness for the post. He doesn't like the idea of running away, and Glenn jumps in: "If Rick says we're not running, we're not running!" Hershel gives Rick an impassioned speech "...get your head clear and do something!" As if he was speaking to someone who was just a little sleepy, rather than a full-on nutcase. It falls to young Carl to point out the obvious; that Rick should take a break. He doesn't.

Andrea continues to bear the brunt of the writers' contempt for women. GINO is training an army and makes it very clear to her what he intends to do with it, but in what she characterizes as an effort to defuse the situation, which is entirely of GINO's making, she travels to the prison. She finds suspicion and hostility, which wouldn't surprise anyone, but, written as a clueless twit, Andrea just can't understand this, and cattily accuses Michonne of poisoning the group against her.[1] Rick asks her to get them into Woodbury and she refuses. She insists she can't help because the innocent people of Woodbury could get hurt, which is an absolutely hilarious concern, given that those same innocent people are the ones GINO is presently whipping into an aggressive army he intends to throw at the prison gang for no other reason than that he's completely insane. For anyone concerned about preventing bloodshed, that would present a very clear course of action, but in the hands of TWD's master screenwriters, no one can sit down and have an adult conversation about it, even when facing annihilation. It's left to Carol to privately--and rather offhandedly--suggests to Andrea that she screw GINO silly, then, when his guard is down, kill him. Now there's an idea!

GINO had told Andrea that if she went to the prison, she should stay there. Andrea defied him and covertly fled Woodbury, then, after her brief visit to the prison, opts to return. Our ever-bright heroes not only allow this, but provide her with a car and wish her well. Our ever-bright Andrea immediately goes to GINO and begins offering him useful intel.[2] Later in the evening, though, it does finally seem as if the lady may redeem herself after all. GINO, in the aftermath of their evening's carnal tryst,[3] is sound asleep (he sleeps wearing his eyepatch), and Andrea slips out of bed and gets a knife. She stands poised over him in the moonlight through the window-blinds, an exquisite beauty with the end of this miserable storyline in her hand. But, being a woman on TWD, she just can't bring herself to do it.

So the episode ends, with everything exactly where it was when it started, except with one less episode to fill.[4]

[*] UPDATE (27 Feb., 2013) - On TWD, the established reality itself is constantly subject to arbitrary revision by the writers. In an effort to make the prison groups' situation appear as desperate as possible, they simply ignore the things they've already shown us. Merle suggests that GINO "could just starve us out if he wanted to." The writers decide to run with this, and have Glenn report that "there's barely any food or ammo." The assertion is outrageous. Back in "Sick," the second ep of the season, they went into the prison cafeteria, on camera, and found enough non-perishable food to last for perhaps years: 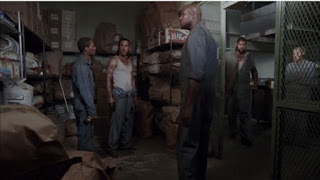 Only a few days of story-time has passed since then, and they have 5 fewer mouths to feed than they did then.

[1] This is part of a telling exchange with Michonne. Back when the prison group had sneaked into Woodbury to rescue Glenn and Maggie, Michonne ditched them and went after GINO. In the comic, this happened because the Governor had repeatedly sexually tortured her. In the tv version, that was erased, and she had no real reason to do it, other than the fact that it had happened in the comic. The writers made an effort to address this tonight, displaying their standard regard for the female sex. "You chose a warm bed over a friend," Michonne chides Andrea. "That's why I went back to Woodbury. Exposed him for what he is. I knew that it would hurt you." Uh huh. Angry Black Woman caricature, anyone?

[2] Something she didn't offer her "friends" while at the prison. Tyreese and his group, exiled from the prison by crazy Rick, end up in Woodbury this week, taken in by GINO's slick talk. GINO was, of course, very interested in the fact that they'd been at the prison, and gleans everything about it he can. Tyreese, in fact, knows how to get into it through the damaged section, the section our heroes, displaying their typical survival instincts, still haven't done anything to repair.

[3] GINO is suspicious of her and even asks if Rick sent her, then, being a TWD character, has sex with her and compliantly goes to sleep right next to her.

[4] Back at the prison, Beth spontaneously breaks into a rendition of "Hold On," by the great Tom Waits. It's totally out of place, but at least they chose a good song.
Posted by cinemarchaeologist at 3:23 AM