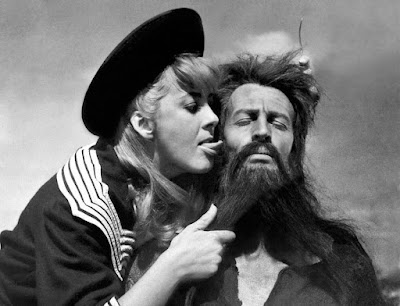 Writing about a widely recognized classic can be a very daunting task. We cinema buffs of a literary bent love our classics and feel compelled to write about them sometimes but the truth is that it's usually an exercise in futility. What can you say about, for example, CASABLANCA or about Orson Welles' films or even about something like NIGHT OF THE LIVING DEAD that hasn't already been said a million times and probably better than you could ever say it? At best, one could manage a hopeless redundancy somewhat concealed behind a snappy wit or quirky style.

For one who reportedly once said "thank God I'm an atheist," Luis Buñuel can appear something of a godsend as such a subject. He's a classic. One of the greatest artists the film medium has ever produced. Everyone recognizes it. And there's been plenty written about the man and his work over the years. Buñuel is a filmmaker about whom there will probably always be plenty to write though, no matter how much is written. One of the wonders of his films is that they're so elaborate, so byzantine and so ambiguous that they invite, require and effectively support nearly as many interpretations are there are viewers. The father of cinematic surrealism is a bottomless reservoir for critical commentary.

He still has some pretty obscure works too. My favorite of his films (so far) is one from his Mexico days, a short one called SIMON OF THE DESERT. I first saw it years ago on Turner Classic Movies. I watched it again last night and at the risk of being pointlessly redundant (and maybe a tiny flickering of hope that I won't), I decided I'd write about it.

The movie tells a wickedly humorous tale of a fanatical Christian monk who renounces all worldly things and, in a fit of piety, spends years of his life standing on a column in the desert to keep himself above the earth and its corruptions. The locals all think he's a saint. Buñuel has a less charitable opinion, both of Simon and of saints in general. The director never made any secret of the fact that he didn't think much of Christianity and its trappings and neither does the movie.

Uber-ascetic Simon (Claudio Brook) is a good Catholic's model of saintly piety. And that's the problem, really. The model of saintly piety is a guy who wastes his life standing on a column in the middle of nowhere. His contempt for the worldly even leads him to snub his own mother, though we later learn he secretly dreams of coming down from his pillar and being with her. Being of the mortification-of-the-body school of sainthood, he scowls at a young monk for being too clean and he takes a sour attitude toward anyone who smiles or seems to be having fun or enjoying life in any way. He's something of a hypocrite in this--at one point, while somewhat delirious, he admits that he blesses things in part because it's fun to bless things--but for the most part, he does make a game effort at being utterly contemptuous of any good life in this world may offer.

Not that this doesn't come with perks. Simon demonstrates genuine supernatural powers. At one point, he causes a man who'd had his hands lopped off for thievery to grow a new pair. Very impressive but, the film seems to ask, of what use are such abilities if, to tap into them, one must live the deprived, harsh, cruddy, joyless existence chosen by Simon? What use is he or his piety to the world?

His basic uselessness is recognized by those who gather beneath his column to dutifully gawk at the saint and ask his blessings. Even when he performs supernatural acts before their eyes, the locals seem almost bored by him. Going before him is like going to church, something done begrudgingly, in mechanical fashion, out of a sense of duty and not from anything they actually gain from the experience. Near the end, one of the local priests scales the column and discusses with Simon the problem presented to the world by the idea of "yours and mine." He illustrates by pointing to the bag Simon keeps for hauling up provisions from the ground and claiming it as his own. Simon protests at first, but when the priest insists the bag is his, Simon relents and tells him he can have it, at which point the priest hands Simon his bag and tells him that, while his attitude is admirable, it doesn't do the world a whole lot of good.

Throughout the film, Satan appears in the form of a beautiful woman (Silvia Pinal). She pesters, questions, tempts Simon, tries to get him to come down off his column and live a little. Even tries to discredit him in the eyes of the locals. He tells her to repent of her wickedness. In reply, she asks if God would restore her to her former glory if she did. Simon makes it clear that would never happen, no matter what. It seems a god must have a villain. Unsurprisingly, Satan sees a god like that as pretty worthless.

Satan is the hero of the piece. Some years ago, when I first saw the movie, I was extremely depressed. It had me laughing myself silly before it was over but the funniest moment--maybe because it was the nuttiest yet so entirely appropriate--is when Satan whisks away Simon near the end. I won't give away any details--it's something that should be seen rather than described.[*] Suffice it to say it's a doozy.

Back in the '70s, movies like SIMON resulted in the Vatican denouncing Buñuel and Jesus Franco as the "most dangerous" filmmakers in the world. I wish distributors would put that as a blurb on every new release of every movie from either of them. Redundant, perhaps, but not pointlessly so.

[*] SIMON is available. After far too many years lost in the wilderness, it has finally gotten a DVD release. It's a Criterion disc, which means it will be both overpriced and of excellent quality.
Posted by cinemarchaeologist at 9:01 PM