On THE WALKING DEAD, No Wrath Need Apply

This evening, THE WALKING DEAD capped yet another lackluster season with yet another breathtakingly unsatisfying finale. TWD's writers evince a strong preference for "Tell, Don't Show" over "Show, Don't Tell." They substitute ridiculous, melodramatic speechifying in place of naturalistic dialogue. As this writer has long noted, this is a show about survival in a zombie apocalypse that rigorously adheres to an anti-survivalist ideology. It's a stupid show. These and many other long-running TWD problems appeared with a vengeance in "Wrath," which was supposed to wrap up the war with the Saviors.

That storyline should have been essentially finished a few eps ago when our heroes liquidated most of the remaining Savior fighters but as has happened repeatedly this season, many, many more magically appeared to take the place of the fallen. In the previous ep, Negan decided to bait our heroes into a trap. Equipped with that Respawning Saviors cheat, he sacrifices even more of his men so that Rick can capture a map misdirecting the forces of the rebel communities to... well, you get the picture. Ultimately, Rick and the gang end up in a field surrounded by a large number of enemy fighters. When the Saviors reveal themselves, they just stand in the open, arranged like a firing-squad rather than firing from cover or a prone position. While this allows for a dramatic (if now well-worn) Kurosawa shot of the shoulder-to-shoulder enemy army cresting a hill, it guarantees that, in a fight, many of them will immediately be needlessly killed as well. Eugene suggested this arrangement and Negan went along with it.

In a turn like something from Monty Python, the Saviors open fire simultaneously only to have their own weapons explode in their faces, courtesy of Eugene sabotaging the ammo he's been manufacturing. There follows what's supposed to be a very dramatic final battle[1] in which our heroes defeat the Saviors, leading many enemy fighters--too many--to surrender.

Rick chases down Negan--hey, it wouldn't be a season finale without a one-on-one between these two, right?--but just as always happens, the two find a way, in the middle of a fight to the death, to talk, talk, talk. Rick points out that Negan's forces are defeated. Negan is unconcerned. "I'll get out of it," he says, "I always do." And damned if, by the end, he does. Rick, after seriously wounding the villain, decides to spare his life. Maggie is quite upset by this,[2] as everyone else should be, but the writers try to paper over it by having Rick give one of TWD's patented speeches about how they all have to work together to build a new world. "We are life!", he declares. "The new world begins." And a lot of other things just as cringe-inducing. He tells the Saviors to go home! And other than Maggie, no one, among an entire army of people who have suffered under these marauders, seen their hard work stolen by them, their lives ruined, their friends and family-members murdered, offers any objection at all.

Besides being handled exceptionally badly, the series has entirely failed to do any of the work that would have been required to make such a turn succeed, dramatically speaking. The Saviors have been portrayed as sadistic bullies, fanatical ("I am Negan!") thugs who get a kick out of terrorism and murder, who enslave entire communities and live large off those they keep beneath their boot. Only a few eps ago, they enthusiastically massacred an entire population of unarmed people who had already submitted to them. There's been no indication that they have any misgivings about the horrors they've perpetuated. Negan himself is a vicious terrorist who bashes heads with a barbed-wire-wrapped baseball bat, who tortures and murders helpless people through a smile, taunting his victims even while he's snuffing them out. Rick decides to keep Negan alive as a prisoner, telling him he's going to spend the rest of his life in a cell watching this better world grow up around him so he can see how wrong he was, but the writers removed nearly every trace of the character's humanity when adapting the comic-book version to the screen, rendering him a one-dimensional cartoon (a frequent complaint here). Not someone who is going to be tormented by this very limp effort at poetic justice, just someone who has a large following of like-minded fanatics and will represent a danger for as long as he lives.[3] The Saviors are a mortal enemy to be defeated, not people with whom one can ever link arms and sing Kumbaya, and there's no way to see Rick's play as anything other than suicidally stupid. There's absolutely no reason to believe the Saviors would do anything but return to base, regroup under a new sadistic leader or break out their old one and start all of this over again. Born of TWD's aversion to raw survivalist sentiment--killing them would be a nasty business--Rick's decision is shown as being driven by Rick's memories of Coral and while the writers want viewers to think it's a noble and moral decision and a tender tribute to his departed son, this just makes it seem worse, like Rick has his head utterly up his own ass and isn't considering what is, from a practical standpoint, in the best interest of those he leads.

Earlier this season, the writers had some of the Saviors switch sides, and one assumes this was done with an eye toward the ultimate resolution of the storyline, an effort to establish at least some basis for Rick's actions, but these turncoats have, with only one exception, been nameless non-entities (and even with the one, I can't remember his name). They've done nothing to counter the overwhelming impression of the Saviors that viewers have been given over the last couple of seasons but because they exist and because the one fellow has been nothing but cooperative, the writers apparently consider this sufficient. They've gone Tell, Don't Show again. During tonight's ep, the Saviors invaded Hilltop. Tara stayed behind to fight them and a contingent of these ex-Saviors stood with her--the same sort of nonsense. 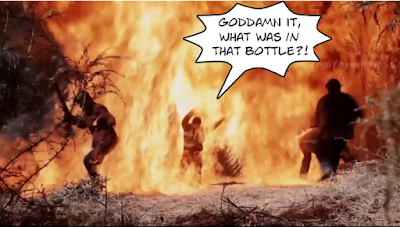 It was made even worse in this instance because just as things were about to get rolling, the approaching Saviors suddenly burst into flames from what turn out to be super-powered Molotov cocktails[4] lobbed by the just-arrived women of the Oceanside community. They've decided to join the other communities in fighting the Saviors but when they arrive, they have no way of knowing what's even going on. Their surprise appearance is completely random. They just walk up and start burning people. This is a community whose entire male population--these ladies' husbands, fathers, sons--were murdered by the Saviors. One suspects they'd probably have a very strong opinion of Rick's decision to let Negan live and the Savior community continue.

One suspects just about everyone Negan and the Saviors have terrorized, whose friends and family the Saviors have murdered, would have a very strong opinion on these matters but in real time, no one but Maggie offers any dissent. And, this being soap melodrama, she just collapses, screaming and crying about how it's not right to let Negan live, instead of taking charge of the situation like a leader (as in, "anyone who helps save that fucker dies"). 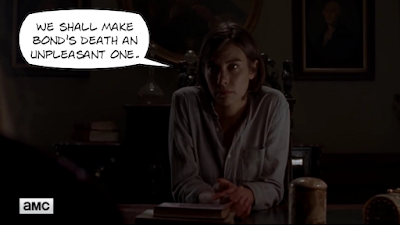 Toward the end, there's a truly bizarre aftermath scene wherein Maggie, at her desk, lit like a supervillain and with ominous music playing under her words, says Rick was right to let the Saviors live (shiver) but very wrong to leave Negan alive. She throws in Michonne as well. She says we'll put Hilltop back in order, build up its defenses, get strong. "We're gonna' bide our time, wait for our moment and then we're gonna' show him," clearly implying some sort of violent retribution one could read as extending to the entire Safe Zone community. The camera reveals she's talking to Jesus and Daryl. The former offers an agreeable smile and a nod while Daryl verbally agrees, neither being reactions that make any sense. Jesus has been the pacifist all season, throughout, even, this very episode, when he convinces Morgan to stop killing Saviors. Daryl's bond with Rick has been nearly unshakeable throughout the run of TWD. Even earlier this season, when he broke with Rick over the idea of releasing the dead into the Sanctuary, he apologized to Rick--the guy he calls "brother"--after. It's reasonable to think he would strongly disagree with Rick's decision re:Negan[5] but it's impossible to imagine him even considering some sort of violent action against his own "family." For that matter, it's impossible to imagine Maggie herself contemplating such a thing. To deal with a problem that could be easily solved by a quick visit to Negan's cell (and, if one wants to be unreasonably vengeful, to Rick and Michonne)?

Thrown in to provide what's meant to be a shocking twist, this is just stupid. Sort of like the rest of TWD this season.

[1] The staging and editing of the big battle are absolutely atrocious. Negan speaks to our heroes through electronic devices which, along with the geography, make it seem as if it's coming from all around them. The whole time, they're looking around and fruitlessly trying to pinpoint it and no Saviors are visible in any direction. When the Savior firing-line appears, it seems to be behind them but when the bad ammo takes out that line, Rick orders a forward charge, in a direction where no Saviors are visible. That direction is where Negan and his lieutenants are standing. A hill between the rebels and Negan's contingent allow them no view of one another. During the initial Savior volley, Negan and co. fire their guns, which makes no sense--they don't have any targets in sight, just a hill of dirt. The rebels, unmindful of the Saviors behind them, rush over the hill and defeat those in front of them.

[2] Though this being soap melodrama, Maggie, the leader of Hilltop, just screams and cries about how what Rick's doing isn't right, instead of taking charge of the situation (as in, "anyone who helps save that fucker dies").

[3] The writers' decision to gut the relationship that developed between comic Negan and Carl is particularly fatal here.

[4] They explode in bursts of flame that shoot 30 or 40 feet into the air, incinerating wide areas.

[5] Daryl has just spent more than 2 seasons lamenting the fact that he didn't kill Dwight upon their first encounter, which is rubbish from the writers, and vowing to kill Dwight once the Savior war is over. Tonight, prior to this scene where he's plotting with Maggie, he decided, instead, to let Dwight live--gives the guy a truck and lets him leave.