In "Worth," tonight's WALKING DEAD, Negan makes his presence known at Sanctuary and deals with his disloyal lieutenants Simon and Dwight.

That's it. That's the plot. In a better-written series, this would have been a subplot in an ep about something else. Here, it's the featured--and nearly sole--attraction, with only a rotating handful of scenes with other characters to pad out the rest. There's only one more ep left in the season; this was just a standard TWD delaying action to get things there.

There are a few scenes with Aaron, camped out beyond the Oceanside community, that exist primarily to get in a zombie-fighting sequence. He hasn't been there long but seems to be nearly dead from exhaustion, hunger or something. His community terrorized the ladies of Oceanside and stole their guns. Now they have none but he's trying to recruit them to fight the Saviors, presumably with the sticks and stones Rick left them.

Last week, Rosita and Daryl were scoping out Eugene's ammo plant and there seemed to be a lot of Saviors around. On tonight's ep, set the next day, the operation appeared to consist of seven or eight people and only two armed guards. Our heroes swoop in, take out the two heavies carrying guns and hijack Eugene as he steps outside but there's no reason they couldn't have just stepped inside and taken out the entire operation, taken away as much ammo as they could carry, probably even recruited the workers. Instead, they just take their prize and leave. Minutes later, Eugene escapes them using a ruse that wouldn't have fooled a 7-year-old.[*] By the time he makes it back to his shop, a lot more armed guards have turned up and he's assured the security situation has been addressed. 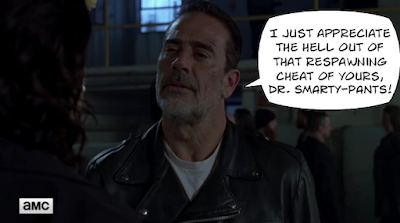 Where in hell did the Saviors find any more gunmen? I spent a lot of time in my previous review pointing out that no matter how many Saviors Rick and co. have killed in an entire season devoted to systematically killing them, an endless number of replacements are being continuously written into the story. Savior manpower should be down to practically nothing by now but instead, it's as if Eugene had invented a respawning cheat. It's been a recurring absurdity throughout the back end of this season. When Negan drops the hammer on Simon, he kills Simon's loyalists too--7 or 8 more guys. The two then move inside for a final hand-to-hand battle to the death and that respawning cheat has been working overtime again--there may be a hundred other people present to watch the festivities: 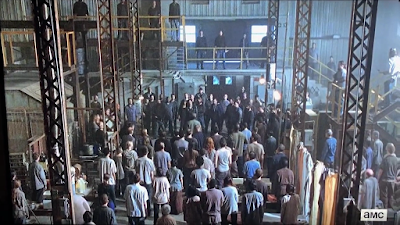 And even that doesn't include those who are elsewhere (like at Eugene's ammo factory). So after a whole season of all-out war, taking out Saviors left and right, the Savior force looks about the same now as it did at the end of last season before a shot had been fired: 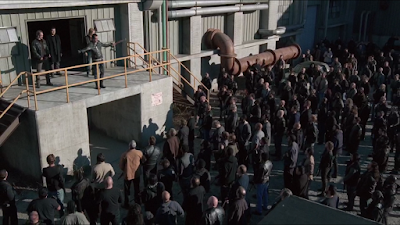 They aren't even trying.

Not much else to add; it just wasn't much of an ep.

[*] UPDATE (11 April, 2018) - About this, regular reader Jim the Hammer writes, "I like how Daryl, the hillbilly who in season 2 was able to track Shane and that kid through a forest, in the dark, to the extent where he points out who walked where and when, etc.... is unable to discern Eugene's cartoon escape method in a pile of ashes. In broad daylight. Once again, established character traits/abilities get thrown out the window to advance a plot point for the simple reason that the writers couldn't think up a reasonable and more believable method to do so."