This was an evening of Idiot Plot Syndrome on THE WALKING DEAD. One of the very few substantive things that happened in the first half of the show's present season is that Maggie usurped the spineless Gregory's leadership of the Hilltop community. But when the second half launched, it was as if the writers hadn't been watching their own show, a fairly common phenomenon with TWD, and everyone was back to treating Gregory as if he was still in charge. Though Gregory had just betrayed them and tried to turn over Maggie and Sasha to the Saviors, our heroes even laid out before him their plan to organize a rebellion against the villains. Not much happened on "The Other Side," tonight's installment, but the ep did underscore the danger posed by Gregory, as he's clearly poised to spill his guts to Negan lieutenant Simon. Merely poised, of course--if wouldn't be TWD if it didn't try to artificially stretch every bit of what passes for plot to the absolute breaking-point.[1]

Tonight's a-plot was the Saviors stopping by Hilltop to appropriate its doctor after Negan torched his own. That's all. The b-plot followed Sasha and Rosita as they made their way to the Saviors' compound to try to kill Negan. A few eps ago, both admitted they expected this to be a suicide mission. If they attempt such a thing and are killed, captured or even identified, the likely outcome is that the Saviors descend on the various communities in force and out for revenge, an onslaught both Sasha and Rosita know full well those communities are, at present, entirely incapable of resisting, but Negan murdered their co-beau with his bat and as TWD's writers are sure, women are just completely irrational children who let their emotions drive them, even if it puts everyone in danger.[2]

Leaving Hilltop, they wire a car that under no circumstances would still have a usable battery after sitting idle for nearly two years, and make their way to the compound. The Saviors have talked about the need for security in a few different eps and do it again in this one. They're so concerned about it (and are such dangerous characters in general) that they leave tall buildings overlooking the main yard of their compound sitting empty and unguarded for any sniper who may come along. The ladies hole up in one to wait for Negan. It's a perfect set-up and would allow them to dust him from afar and have an excellent chance of getting away after. He even comes out into the open at one point but Sasha never gets a clean shot. No problem, just wait until he comes out again, right?

Hey, are you kidding? This is TWD.

Our heroines have a captured Savior radio and upon hearing over it[3] that Negan will be staying in for the night, they decide they simply can't wait [see Update below] and must immediately try to break into the huge compound full of hundreds of armed antagonists, try to locate the baddy--they have no idea where his boudoir may be--and kill him. They could stay right where they are and just shoot him in the morning or the day after that or the day after that, whenever he shows himself, but they're women. They break in at night and, encountering Eugene, randomly tell him they're here to rescue him, something that wasn't on their agenda at any stage of their operation. Given that they're both planning to suicidally plunge into the compound with guns blazing, who, exactly, was going to take Eugene to safety? The moment is included solely to give the cowardly Eugene the opportunity to decline their offer and leave the viewer with the thought, "Ooooh, he's changed sides!" As if Eugene has any backbone at all.[4] Sasha then doublecrosses Rosita, locking her out of the fence, telling her to go home--"they need you"--and then launching her hopeless attack.

And that's how TWD burned through another hour tonight.

[1] The ep was full of the usual delaying tactics in general--practically every scene is pointlessly extended. Simon tells Gregory to come see him if anyone attempts a coup at Hilltop, as if Gregory (or anyone else) can just zip right on over to the Saviors' compound any time they like. Showing he's no brighter than anyone else, Simon even tells Gregory where said compound is located (because, of course, the writers needed to impart that to Gregory). After Gregory is overthrown and possibly killed, I'm sure he'll drop in to lodge a complaint.

[2] This is particularly egregious when it comes to Rosita, as her previous fly-off-the-handle effort to assassinate Negan already resulted in one person being killed and Eugene being carted off. Rosita herself wasn't killed on that occasion solely because the writers didn't want her dead.

[3] When they listen in, they have it turned up way too loud, so much that people on the ground would be able to hear it.

[4] Actually, Eugene did grow a backbone in season 6; it's just that the writers decided to ignore that development this season. 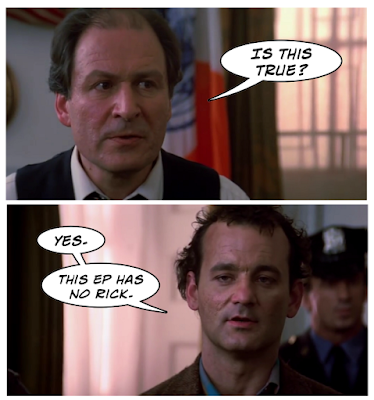 UPDATE (Mon., 20 March, 2017) - This morning, a few readers have insisted Sasha and Rosita opted to leave their sniper's nest because Eugene, over the radio, ordered the outbuildings searched. That this would be an utterly absurd twist constitutes, of course, no argument against these writers using it--this is TWD, after all--but that isn't really what happened either. Eugene ordered those stationed in the outbuildings to go round up some zombies. His full broadcast:

"This is Dr. Eugene Porter, Chief Engineer, speaking. I'm gonna need a dozen more walkers, a.k.a. 'dead ones' in the local parlance, for expanding the fence protocol PDQ. Actually, PFQ. This is per Negan, who I also am, even if it takes all night to procure them, so I need able-bodied persons out there in the surrounding blocks of buildings snoopin' and snatchin', stat. Negan will be indisposed in the boudoir, so in the meantime, any questions should be directed to yours truly. Dr. Eugene Porter, Chief Engineer, also known as Negan, who I am."

Some interpreted that to mean he was ordering a search of the buildings. That isn't at all clear though. Negan wants zombies; the third or fourth floor of some building (where Sasha and Rosita are encamped) would be the last place anyone would think to look.

(I admit I find that interpretation rather delightful, the show's usual incompetent writing stretched to the nth degree. In one broadcast, Eugene tells our heroines Negan won't be back out tonight, gratuitously tells them where he will be for the night and by a win-the-lottery-odds-level coincidence, also orders the outbuildings searched at that very moment, of all times, necessitating their leaving. It's absurd.)