THE WALKING DEAD Goes To Bartertown

Tonight, on THE WALKING DEAD, Rick and co. appeared to have dropped into the pocket universe wherein the Max Max flicks are set; where characters with weird names and inexpressive faces dressed in black and grey Max Max-like gear stand around and speak through a monotone in clipped, half-sentences as if they've grown up in the aftermath of the nuclear apocalypse and regular conversation is strange to them. Their home is a maze of piled-up car-wrecks and trash that stretches to the horizon--with the whole world at their disposal for residences, they're mindful enough of the series' desire for visuals to live there--and they interact with our heroes while in the distance, a rusty car-door blown by the eternal winds of the wastelands atmospherically squonks away. I never noticed a crow cawing at any point--perhaps an oversight. At one point, Rick is even made to prove himself by fighting against a Medievaled-up zombie in the Garbage Pail equivalent of Thunderdome.[1]

It is, of course, completely ridiculous that such a thing should exist in TWD, a world less than two years removed from the end of civilization, and it couldn't more boldly clash with the established tone of the series if it had been a colony of clowns on unicycles but the writers are at least trying to branch out a bit. Or at least watching Z NATION. Perhaps feeling somewhat emboldened by having introduced a similarly odd place in the Kingdom. That the series had only recently introduced the Kingdom may have discouraged some writers from throwing this at viewers so soon but hey, this is TWD! Bring on the clowns![2]

Rick is looking for warm bodies to throw against the Saviors and he's pleased to encounter these Maxian garbage-dwellers--his "New Best Friends" (the title of the ep). They know nothing of the Saviors--this seemingly-endless stretch of potential salvage populated by a virtual army right in the midst of Negan's territory has somehow escaped the villain's notice.[3] Fortunately, Rick is on hand to play Capt. Walker and explain the Pocky-Clips to the children. They're not interested in his war until he defeats their armored zombie. After, they're impressed enough to strike a bargain; if Rick, who doesn't even have sufficient guns for his own people, can bring them guns, they'll fight with him. Their leader Jadis--no, really, that's her name[4]--tells Rick they've been watching that boat full of supplies Rick raided for a long time but never tried to get at it through the zombie-trap surrounding it. We take; we don't bother." A warning about their potential abilities as combatants? Rick doesn't seem worried. Rick is just great. If you don't believe it, Gabriel offers him another monologue on the subject.

In tonight's b-plot, Richard, King Ezekiel's "knight," still wants a fight with the Saviors and gets it in his head to provoke one. At the meeting to hand over the Kingdom's regular tribute, he again gets into a scuffle with the same Savior thug he did in an earlier ep and it's pretty much a direct repeat of the earlier scene. The Savior boss says there will have to be a reckoning for this but then he and his men pack up and leave. Any reckoning, it seems, will have to come second to the need to stretch out the limited plot some more.

Richard inducts Daryl into his ridiculously roundabout plan to provoke a fight. He wants to wipe out a Savior patrol then leave a "trail" from the dead to a crazy woman who lives alone but who has been befriended by Ezekiel. If she's killed, Richard thinks that might convince Ezekiel to go to war.

When Daryl learns the woman is Carol,[5] he is, of course, less than receptive and proceeds to whip the tar out of Richard in front of a trailer that, oddly enough, is a rusted-over replica of the Snowman's rig from SMOKEY & THE BANDIT! 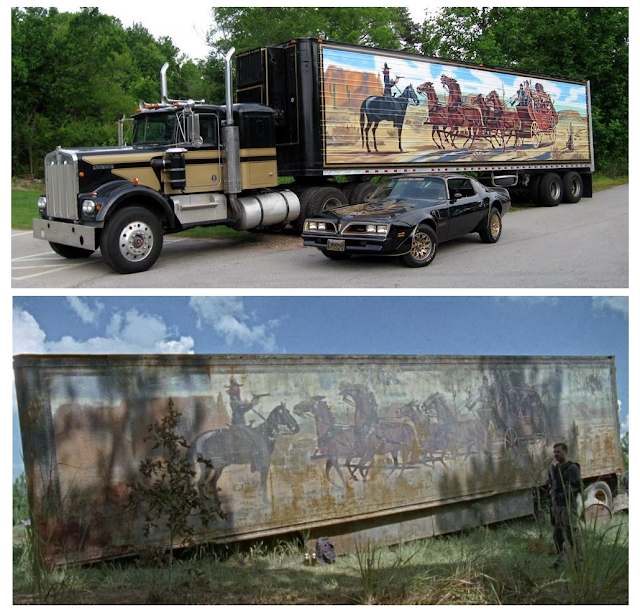 Yeah, I didn't get that one either. And no one even checks to see if any cases of Coors were still in it.

Daryl tasks Morgan with convincing Ezekiel to fight. Last season, I spent a lot of time on the ridiculous pacifist persona the writers had arbitrarily grafted onto organ, assassinating the once-beloved character. At the end of the season, Morgan had what was presented as a major breakthrough; he realized such an outlook was incompatible with this zombified world and killed in order to protect Carol. If this hadn't been so clumsy and inorganic, one could almost call it character development! That's never going to fly on TWD; this season, Morgan is right back to looking sad-faced and shaking his head every time someone suggests a fight. But tonight, one of the Saviors took his stick! Perhaps, for the season finale, he can again have that same epiphany as last season.

[1] Yes, the writers chose the only bad Mad Max movie as the one to emulate.

[2] Which is not to say I disapprove of such a setting and group. It's handled pretty badly here, as things on TWD will tend to be, but I definitely approve of the Max Max-ian stuff. TWD could use a little madness. Ok, a lot. It will be interesting to see what its regular fans will say about it adopting the "crazy blender" approach of Z NATION.

[3] It escaped everyone else's notice as well, all of the communities so far established who have spent a couple years sending teams out into this same general area to scavenge for supplies.

[5] Daryl reunites with Carol for a time. She's afraid the Saviors have done something horrible; seeing how emotional she is, Daryl lies to her, concealing the murders of Glenn and Abraham. In context, this is a dramatically credible decision (or would be if Carol's current emotional state wasn't just an arbitrary imposition by the writers) but it's impossible not to view it through the lens of the usual business as just another delaying tactic, aimed at needlessly stretching out the storyline.