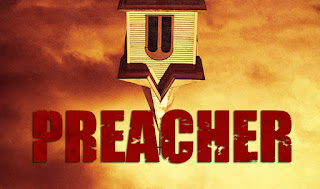 I was quite ill the day I first sat down to read "Gone To Texas," the first "Preacher" trade paperback collection. I'm not sure laughter was the best medicine in my particular case; the book made me laugh so hard, I actually threw up. Right after throwing up--which seems, in retrospect, an entirely appropriate tribute to the comic--I went online and ordered the rest of the series. Created by Garth Ennis and artist Steve Dillon, "Preacher" was raucous, wildly imaginative, wonderfully offensive, relentlessly iconoclastic, screamingly hilarious--a particularly fine example of comic art that became a personal favorite.

Its story begins with a clandestine affair between an angel and a demon. This union of holy and unholy produces an offspring, a being who theoretically possesses all the power of Heaven and Hell. The only thing it lacks is a will of its own. The lower angels imprison it in a laboratory for study but one day it breaks free, comes to Earth and bonds with the body of a redneck preacher from Texas. The Rev. Jesse Custer (note the initials) learns it has given him the power of the Voice; when he gives a command, it must be obeyed. Discovering that in the aftermath of the lab escape God has retreated to Earth, Jesse, his car-thief girlfriend Tulip and his new vampire pal Cassidy undertake an odyssey to find God and force him to account for the miserable world He's created. That's the basic story of "Preacher": the Rev. Custer vs. God. It plays out over the course of a long series of darkly comic--and sometimes just damn dark--adventures populated by all manner of quirky oddballs (Northern Irishman writer Ennis makes it an extended love-letter to all things American).

In this age of copious comic book adaptations, people have been trying to bring it to the screen for years. Doing so in any recognizable form, of course, presents some big, obvious problems. The scale of it is enormous. Not only is it a long story, something that could only be done in a series of films, mini-series or a regular show, it travels across the U.S. and abroad, involves Heaven, Hell, stories that go back hundreds and even thousands of years and it's chock-full of set-pieces that would be incredibly expensive to bring to the screen. At the same time, the controversial nature of the material--the sex, the gore, the atrocities, the blasphemy--make it a very hard sell for almost any potential venue that could adapt it. It steps on every toe of every crusading busybody who ever raised a sword against the existence of any form of popular entertainment and faithfully bringing it to the screen involves braving the likelihood of it spawning a LAST TEMPTATION OF CHRIST-style backlash and being mowed over by it. A courageous premium cable channel seemed its only realistic option.

When it was announced AMC was going to produce a weekly series based on the property, I simply didn't think it could be done. Anyone who has ever cracked a single issue of the comic knew an ad-supported outlet where even nudity and cursing was a problem wasn't going to be able to do it justice. AMC in particular isn't noted for its intestinal (or testicular) fortitude; in tailoring THE WALKING DEAD to a whitebread middle American audience, its execs gelded the property so severely they cut out its soul. Any AMC "Preacher" seemed certain to follow in a particularly dismal Hollywood tradition of purchasing the rights to a book, immediately throwing the book in the trash and creating an "adaptation" whose major similarity with the original is its name.

And that's pretty much exactly what happened. AMC's PREACHER debuted last night. This was my subtle dissection of the pilot, composed immediately after watching it:

I wasn't disappointed, mind you. I understood the improbability of the whole affair and my skepticism had been reinforced by all of the promotional material, which downplayed any supernatural elements and from which it was impossible to discern any sort of plot. Though I had a faint glimmer of hope that, regardless of questions of fidelity, something worthwhile would emerge--oh, hopeless optimist, me!-- it pretty much turned out exactly as I thought it would and there's nothing about knowing its probably about to happen that makes it any easier to watch something one loves being raped.

I've never understood the Hollywood preoccupation with casting Englishmen to play Americans (and, for that matter, Americans to play the English).[1] There are apparently no American Southerners who can play an American Southerner, so as with THE WALKING DEAD (where very English Englishman Andrew Lincoln was cast to play a redneck Southern sheriff), Englishman Dominic Cooper is here cast--and badly miscast--as Jesse Custer. He doesn't have the look for the part and, as with Lincoln, his fake accent is just cringe-inducing. To play Tulip, Jesse's love, who, in the comics, was a blonde, saucy Southern belle, the producers chose Ruth Negga, an actress of Ethiopian-Irish background, whose on-and-off-again "accent" is more over-the-top than Kyra Sedgwick's in the early days of THE CLOSER. There is an actual Irish character in PREACHER, the vampire Cassidy. And to play him, the producers chose... an Englishman. Who looks nothing like the character. At all.

If you ever figure it out, let me know.

I wouldn't slam the actors for this; they do what they can with what they're given. They just don't fit these parts. Casting them doesn't make sense.

Nether does a lot of what happens during the pilot, much of which is a disjointed, badly-paced mess of random events and shifts in tone. It  becomes so concerned with setting up various things for later that it doesn't bother to tell an engaging story itself, the primary mission of any pilot. Some mysterious force comes from "outer space," zips through the galaxy and into the body of some preacher in Africa, who promptly explodes. What does this have to do with anything, you ask? Nothing at all. But it happens repeatedly to various clerics around the world as the story proceeds, an utterly needless complication of what had been, in the comics, a straightforward scenario ("the entity comes to Earth, bonds with Jesse").[2] Between these incidents, we meet Jesse, see how badly he sucks as a preacher, follow him around while he interacts with various denizens of the town. Remarkably boring stuff. Cassidy is introduced while tending bar on a private plane in flight. He goes to a bathroom, finds a marked-up Bible then steps out, realizes the plane is flying in a different direction than he thought and picks a fight with everyone on board. His foes immediately pull out an arsenal of archaic weapons and have it out with him but he kills them all, taking blood from the last two before diving out of the plane without a parachute. So he's a vampire and these guys, it would seem, are vampire hunters (one of them pours holy water on Cass). What's the story? Who knows?[3] Tulip shows up much the same way, fighting with a guy in an out-of-control car rushing through a cornfield. She eventually gets the car stopped, puts down her assailant and takes something from him.[4] She meets a pair of random kids, puts them to building a homemade bazooka then stashes them in a storm-cellar while she shoots down a helicopter with it. What the fuck is all of this about? Who knows? More stuff for later. Or not.[5]

This description may make it sound action-packed but it's really quite dull, something a Preacher project should never be, and this made its 90 minutes feel much longer. Viewers have no investment in anything I've just described. These moments come out of nowhere and disappear the same way. The wicked, black sense of humor from the comics is entirely absent here. The ep makes a few attempts at being funny; most of them as bad as the accents. It radically downscales the story as well, probably for budgetary reasons--it appears as if we're going to stay in Annville for the foreseeable future. By the end, Jesse is ready to give up being a preacher. He asks for a sign from God and the entity appears, slamming into him and taking up residence. He decides this is the sign he wanted and instead of stepping down vows to become the best damn preacher in Annville, Texas. If followed through--and there isn't even a hint it won't be followed through--this is a complete negation of the comic story. Instead of "Rev. Custer vs. God," it's "God blesses Rev. Custer with the power and the will to do good in His name."[6]

For the life of me, I can't imagine why this series even exists. Obviously, money is behind the creation of any television show. Existing properties are acquired because, in part, they have an existing fanbase to which the adaptation can be sold but AMC's PREACHER goes out of its way to entirely alienate those who enjoyed the comic. It positively begs the question: Why go through the trouble and expense of buying the rights to something if you have absolutely no interest in bringing it to the screen? Just cut all pretense of any tie to the existing material, call it something else and you'd own it outright. As it stands, AMC's PREACHER fails as an adaptation and fails on its own merits. Miserably. I was expecting the worst and even I was surprised by how very bad it is.

[1] Does anyone in Hollywood know Gweneth Paltrow isn't English? Does anyone know Jamie Bamber is?

[2] The pilot is full of these sorts of ill-advised changes that seem to have no rhyme or reason behind them. In the comic, Jesse's father was a Vietnam vet who became a bartender, a good-hearted tough guy who was eventually killed by his wife's evil family because he wouldn't bend to them. The pilot keeps the angle about his being killed by someone but makes him a minister who worked in Annville. For some complicated reasons--the evil family being an instrument of God--this suggests much of the backstory on that family, which takes up a lot of Jesse's formative years and is some of the best storytelling in the comic, will be discarded.

[3] This sequence threw away what was, in the comic, a great surprise reveal of Cass's vampirism.

[4] It's a paper with some sort of "job" on it. She talks with Jesse about it--the "job"--later but never says what it is or explains that earlier chaos. All we know is that Jesse doesn't want to do it.

[5] The pilot fundamentally changes Jesse's relationship with Tulip. In the comic, he'd met her as a teenager after he'd escaped from his mother's incredibly evil family. His uncles later tracked him down and brought him back to the family compound, threatening to kill Tulip if he didn't come with them. That's how Jesse's initial relationship with Tulip ended--he just disappeared and she never knew what happened until they met again years later. In the pilot, they grew up together there in Annville and just seem to have broken up at some point. This suggests major sections of their respective backstories have simply been discarded.

[6] Elements from a storyline that, in the comics, occurs much later and in an entirely different place and stage of the characters' development are present here, which saws away another huge swathe of the comic. More to the point, the series will presumably stay in Annville and involve itself, for the foreseeable future, with material pillaged from that later story rather than proceeding in the direction of the comic.
Posted by cinemarchaeologist at 1:46 AM