A Devil of a DAREDEVIL (Season 1) 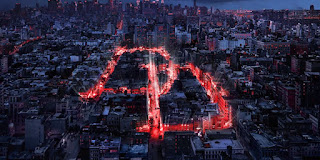 As Netflix has just released the second season of Marvel's DAREDEVIL series; it's probably about time I got around to delivering on my long-promised review of the first. I'd watched most of it in a fairly rapid burst shortly after its release but then, as so often happens, life intruded. I only just got around to seeing the final episode last week.

My pokiness in finishing it certainly shouldn't be taken as any indication of my estimation of its merits. DAREDEVIL was released last spring to almost-universal praise and it earns it. This is a very good piece of television, one of the best Marvel or Marvel-based productions to date. It works as an adaptation and stands up as a very good series in its own right. That isn't to say it's flawless. One of the pitfalls of seeing this particular series through the eyes of a very longtime Daredevil fan is that one is acutely aware of the potential of such a project and of where it fails to live up to it. On that score, the series sometimes hits and sometimes misses.

DAREDEVIL is the story of Matt Murdock, who, as a child, is involved in an accident wherein he's struck by some radioactive gunk that takes his sight but amps up his other senses to superhuman levels. His father, a broken-down boxer, is later killed by gangsters after refusing to take a dive during a fight; Matt grows up, becomes a lawyer as his father wanted but he assumes another identity by night, that of a costumed crimefighter. Daredevil.

This story was adapted to the screen once before, a creative abortion of a feature film from 2003 that certainly did the property no favors. Marvel reacquired the screen rights from 20th Century Fox and produced this series in-house. It was good to see carried over here a heaping helping of the "pulp noir" aesthetic of the book during all of its finer moments and this and the overall quality of the series marked a bit of a comeback for a Marvel Daredevil. At the time it appeared, the comic of the same name had been a mess for years; Mark Waid, its contracted scribe, seemed determined to upend, undo and defecate upon everything that made DD great and unique and had, for nearly four years, been grinding out an overbearingly lighthearted stew of silly, jokey, faux-Silver Agey trash--a "Daredevil" that was still called Daredevil but was otherwise thoroughly unrecognizable. The series wisely steers clear of anything reeking of that particular run. For longtime DD fans, it was good to finally get the character back in a recognizable form and being done well.

This DD is set in a recognizable place as well. When Marvel first announced DAREDEVIL and its other Netflix series were going to be shooting in New York itself, I was pretty skeptical of the decision. Shooting Marvel stuff in New York, where so much of it is set, seems, on the one hand, a dream--something one wishes could always be done--but New York is an extremely expensive place to shoot, needlessly expensive, and my filmmaker bone felt it would probably be better to spend a television budget on recreating the city somewhere much cheaper. It's impossible to argue with these results though. From the waterfront to the rooftops to the view of it all from fancy apartments and expensive restaurants, the city just looks awesome. DAREDEVIL needed even more of it--more broad vistas, more stuff from the street, traffic, people to-ing-and-fro-ing, local color, atmosphere. It isn't enough just to have the characters talk about the city and what they think of it (and there's plenty of that); the series needs to show it, and while DAREDEVIL uses the city well, it doesn't use it enough. Hopefully something future seasons will remedy.

Matt has only just started his nocturnal activities here and his crimefighter persona is still a bit of a work in progress. He's privy to a lot of the ugly things people do to one another, carrying around a lot of anger and at the same time seems afraid of that part of himself, the "devil" in him that makes him want to do very bad things to very bad people. A Catholic, he goes to confession as the series opens and soon strikes up relationship with the priest, Father Lantom, who proves to be an interesting character and counsel as the series moves along.

The entire supporting cast is excellent, not a miss in the batch. When it comes to writing them, the series uses the comic to great advantage. Instead of looking down upon the book and approaching it with the idea of "fixing" it, the series' creators are very respectful and closely port over a lot of what has made the original work for so many years. The characters are strong, their relationships mostly well-played, a terribly watchable tableaux of very human and very likable characters. Some of the more colorful personalities in the Daredevil universe are brought to life with great gusto. Scott Glenn as Matt's ninja-master mentor Stick, Rob Morgan as Turk, low-level hod and Daredevil's frequent informant, Vincent D'Onofrio as archvillain Wilson Fisk, Bob Gunton as his chief money-man Leland Owlsley,[1] Toby Leonard Moore as his well-spoken right-hand man James Wesley. The comic version of Karen Page was a young innocent who worked as secretary for Matt and his law partner Foggy Nelson then, in later years, saw her life take a dark turn into drugs and prostitution. The series version, essayed by the breathtaking Deborah Ann Woll, has her history reversed, her shady future becoming instead a shady past she's trying to escape. In the comic, Ben Urich was a reporter for the New York Daily Bugle who figures out Matt's secret identity then becomes a frequent Daredevil ally; the series reimagines him as a sort of hybrid of the comic Urich and Spider-Man newsman Joe Robertson, giving him a promotion, making him older and changing his race. Vondie Curtis-Hall is rock-solid in the part but near the end of the run, in what's probably the single biggest misstep of the entire series, the writers opt to bump him off. Urich features, often centrally, in a lot of the best stories in the comic--a lot of potential adaptations of great Daredevil lore died with him.

The writing breaks down in a few places. Some sharp dialogue is often made to rub elbows with some significantly less-than-sharp lines. Some arbitrary drama plays out near the end of the season when Matt's law partner Foggy learns of his powers and vigilante activities. Up to this, Matt and Foggy are best pals, thick as thieves going back years, and Foggy becomes way, way too angry upon learning of the DD business. It doesn't really affect him in any meaningful way and he should be as fascinated as he is upset but he treats the matter as if Matt had sex with his wife--absolutely furious and doesn't even want to know the guy anymore.[2] Throughout the series, Wilson Fisk's criminal empire is shown to be massive, pervasive and he's a master of covering his own tracks but toward the end, when Matt manages to find a key witness and get the guy talking, this empire unravels far too easily. What should have been a gradual process taking months or even years and maybe never touching the man at the top at all is relegated to a brief montage in the final episode and ends with Fisk being marched away in cuffs. Should have been done better.

One thing that probably couldn't have been done any better is the appropriately visceral way DAREDEVIL handles its violence. Villain Fisk is a real sadist--nearly beats one of his own men to death in a pointless rage, kills a Russian gangster by slamming the fellow's head in a car door until it comes off, doesn't mind having old ladies killed. DD lacks super strength or speed and doesn't carry around a lot of anti-personnel gadgets; he puts down his opponents the old fashioned way, by beating them until they don't get up anymore. In one spectacular sequence, he shows up to rescue a kidnapped child from a building full of hoods. In a single shot, he goes down a hallway the thugs have staked out, passing from room to room, bashing every one of them to a pulp until he gets to the door at the end, the room in which the child had been stashed. The fight scenes in this first season are excellent, some of the best I've seen in a television production.

The series adopts the noir aesthetic so central to the best Daredevil work. Its darkness is ever-present but not indulged in a silly, juvenile, aren't-we-kewl-to-be-so-"dark" way like MAN OF STEEL (and, by most reports, the just-released BATMAN V. SUPERMAN). A few relatively minor items do, at times, bring it close to that territory. Matt, in the early episodes, walks around looking unkempt and with unshaved beard stubble, the way comic Matt sometimes looks when he's at the depths of a downer. But tv Matt isn't at the depths of a downer at that point and this definitely smacks of a production trying a bit too hard to sell the idea of Dark Character. Thankfully, that bushy look disappears as the series continues. It's also the case that the characters are way too quick to turn to massive amounts of alcohol to deal with their troubles, to a point that it becomes rather silly and feels more like lazy writing. Something to fix in the future. On the other hand, I would have liked to have seen some of the darker thematic elements taken much further, with, among other things, much more Expressionistic cinematography[3] and a more ambiguous wrap-up (as evil that pervasive is never entirely defeated).

There's a lot to like about DAREDEVIL and despite the fact I would do some things quite differently if I was behind it, there isn't a lot to dislike. In an era that so often produces safe, mediocre screen translations of popular comics, it's definitely a keeper and I'm looking forward to taking in season 2.

[1]  The comic version of Leland Owlsley is also known as the Owl, a mutant crime-lord. The series mostly ditches the character's comic persona, carrying over only Owlsley's past as a bigshot Wall Street money man. Gunton's ever-acerbic Owlsley is--forgive me--a hoot.

[2] In the comic, Foggy learns Matt is Daredevil only after they've been law partners--and Daredevil had been active and often involved in their lives--for many years. Karen had known of Matt's dual identity for years as well and Foggy is initially angry with her, thinking she must have known Matt was alive when he'd faked his death (a long story). His anger, which was much more justified, doesn't last beyond that initial outburst.

[3] And better-managed cinematography as well. At one point, there's a classic noir moment, two people in an office at night with light coming through the window blinds, but the characters (Karen and Foggy) are having a warm, friendly discussion. This set-up would have been better employed for some of the darker moments that came later but which, paradoxically, often aren't photographed to reflect the mood.
Posted by cinemarchaeologist at 11:08 PM