[This was written as an informal Facebook post, so it's probably not up to my usual standards here but the show is a bit of a hidden gem, so I'm gong to post it anyway.] 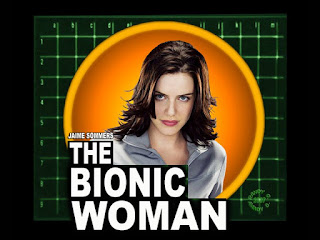 In 2007, some of the gang from the revamped BATTLESTAR GALACTICA (which was coming to an end) got together and revived BIONIC WOMAN, the 1970s spin-off from THE SIX-MILLION DOLLAR MAN.

In this new iteration, our heroine Jamie Sommers is a bartender in love with a fellow who, it turns out, works for one of those super-secret shadow agencies that contract with the government for various bits of dirty work aimed at saving the world from behind the scenes. One of their projects had as its goal creating a bionic agent, a cyborg with great strength, speed and other technologically-enhanced capabilities. When Jamie is nearly killed in a rather extraordinary car crash, loverboy takes her to a secret facility and has her rebuilt but when she comes to and gets the story, she's not so sure she's interested in the kind of work her overseers want from her. Her overseeers, in turn, aren't, in that case, sure they're interested in allowing her to live. Jamie eventually sees the benefit of the work, which allows her to save the world behind the scenes, and the two come to an arrangement.

Overall, the series was, it must be conceded, a bit of a mess. A strong supporting cast that included several BSG hands complimented drop-dead gorgeous English actress Michelle Ryan in the title role. She was an excellent choice but I found it annoying that, as so often happens in American productions, the actress was made to employ an American accent, which anyone who has heard Ryan's native diction can't help but see as a crime against humanity. It's the smallest of several questionable decisions that worked against the project. Though only a few eps were produced, series creator and producer David Eick didn't have a stable partner through a lot of the process and the tone of the series is all over the board. The best of it resembles the tone of BSG, a very dark take on the material, but even those eps often featured bizarre tonal shifts, as Jamie's secret life is intercut with inane, almost generic domestic material involving her and her little sister, whom she's basically raising. The series would build up a story that seemed rather important and immediate and then cut to something entirely different and with an entirely different tone in the next ep. I don't want to hit it too hard on things like this--it's still a very good show and one I'd definitely recommend--but it did still have kinks in it that I suspect would have been worked out had it been allowed to continue. The little sister, for example, was a computer hacker and probably would have eventually been inducted into Jamie's secret work; in these early eps, she was just a drag on the show. It's uneven, to be sure, but well worth one's time. That very unevenness, in fact, helps make it more interesting; it's a show run by talented people and trying to figure itself out.

BSG's Katee Sackhoff has a great recurring part as Sarah Corvus, the earlier prototype bionic woman whose mechanical alterations drove her insane until she went on a killing spree and had to be "retired." She didn't die though, and she returns to cause all sorts of trouble. She's the linchpin to the series' core mythology, which has to do with the creator of the technology and Bad Things That Happened In The Past. Good stuff.

A writer's strike the year it debuted meant only 8 episodes of BIONIC WOMAN were produced. It debuted with great ratings but NBC didn't treat it well--in only 8 eps, it was preempted twice--and the network's confidence in it apparently dried up during the writer's strike. Emblematic of the sort of decision-making that has left NBC in such sad shape to this day, it was cancelled without having been given much of a chance. Too bad. And too bad someone else didn't pick it up (apparently, a genre show has to suck before it draws SyFy's interest).

In the years since it died, it has fallen into undeserved obscurity. It's available on DVD. If you're looking for some entertainment, you could do a lot worse.

--j.
Posted by cinemarchaeologist at 4:22 PM