Perusing Facebook tonight, my eye plucked from the plentiful geeky puffery that perpetually passes through my feed a brief op-ed piece from Uproxx that purports to explain "Why the DC Universe is Dark and Gritty." Released alongside the first substantial trailer for BATMAN VS. SUPERMAN: DAWN OF JUSTICE and authored by a Dan Seitz, it makes a show of tackling criticism that has been leveled at the tone of DC's cinematic offerings but mostly manages to rather spectacularly miss the point of that criticism. It seems a good hook on which to hang my long-delayed review of MAN OF STEEL.

Seitz begins by beating up a straw man, "the implied idea that nobody wants to see dark and gritty superhero movies." If anyone had ever seriously pursued that line the box-office figures Seitz cites are sufficient to refute it but of course that hasn't been the argument. That a movie featuring some species of dark tone can make lots of money says nothing about whether it should have that tone. Obviously, the Batman should be dark but what critics in the fan community have noted--and what Seitz entirely sidesteps while in defense of darkness--was that the version of "dark" adopted by MAN OF STEEL, the film that launched DC's new cinematic universe, was entirely inappropriate to the character and material. And those critics are correct. MOS's "Superman" is born of contempt for the basic nature of the character. The key to Superman is the "man" part, not the "super." Though an alien, he was raised as one of us. He's a good man, the Midwestern farmboy whose parents instilled in him strong values that guide him through life and who just happens to be able to juggle mountains, powers he uses to help others in need. Some writers over the years have taken this to an extreme, presenting him as a "big blue boyscout" and even something akin to a saint but such treatments are an exaggeration of the existing character, not any sort of revision of it. Superman is truth and justice, sometimes "the American way," offered with a wink from a friend who is here to help. He's a character of hope and of light, whose powers are literally derived from the sun itself. That sort of thing may be frowned upon in some quarters today but that's Supeman. Superman is not a brooding, alienated anti-hero/god and if you lose what I've just described and turn him into one, you may be trendy and real kewl and all but you aren't doing Superman anymore.[1] The superbeing from MOS who wallows in angst, who chooses to let his adoptive father die for nothing when it would be child's play to save the man[2] and who zips around amidst falling skyscrapers utterly indifferent to--and, in fact, helping cause--hundreds of thousands, perhaps millions, of deaths is no more Superman than he is Bob Newhart.[3] He's the anti-Superman, a fundamental negation of the character. No one involved in the production of MAN OF STEEL had the slightest interest in making a Superman movie and they didn't.

Superman isn't even the protagonist in MOS. The film is about a civil conflict on a long-dead world being continued on Earth, a fight between an exiled criminal and the ghost of his dead enemy. While Superman is the title character in what's supposed to be the beginning of a franchise built around him, he's virtually irrelevant to the story. He merely shows up to act as the proxy of a dead father he never even knew in the final act of a battle that happened before he was born.

Seitz argues that "the entire point of these movies" is that "the good guy wins against all odds. All we’re really talking about here is how brightly lit his path happens to be as he gets to his inevitable destination." Even setting aside the question of this truncated notion of what the films should be, one can't escape (even though Seitz doesn't address) the fact that the hero's triumphant "win" at the end of MOS occurs over an almost indescribable excess of carnage and death, horrors which, in the movie, are, for all intents and purposes, entirely without consequence. Put on the screen before one's eyes then not even touched upon.[4] Elsewhere, in reply to critics who had slammed the film for its humorlessness and, more broadly, joylessness, Seitz asserts that the film "just wants you to take the idea of a man who can fly and bend steel with his bare hands seriously." Is it really necessary to point out that this consequence-free destruction hardly bespeaks a serious, mature engagement with the material?[5]

The rest of the film doesn't fare any better on that score.

For decades, comic Superman's extraordinary powers have been said to come from the reaction of his Kryptonian physiology to Earth's yellow sun. MOS alters this equation--they're now the result of a combination of Earth's sun and atmosphere. Appropriately, given this, when Superman goes on the villains' ship and breathes its Kryptonian atmosphere, he loses his powers. But throughout the film, the Kryptonian villains walk around on Earth in spacesuits that pump Kryptonian air for them to breathe yet have all the godlike powers of Superman anyway. Zod, their leader, wants to terraform Earth, giving it a Kryptonian atmosphere, which would presumably take away their powers. Why in hell would anyone who could live as a demi-god want to do that? It gets better too, because he also asserts that merely living on Earth as it is, sans terraforming, would require years of pain to adjust to its atmosphere then when his suit is damaged, he adjusts to the Earth atmosphere almost immediately. Zod has a world engine that can make over the Earth into a clone of Krypton but the process will destroy its inhabitants. This same world engine could presumably make over any planet in exactly the same way but he wants to use it on Earth because, well, because he's the designated villain and that's just the sort of evil stuff villains do. To defeat the villains at the end, Superman opens a black hole within the Earth's atmosphere!

These are just some examples of how "seriously" MOS takes its premise. For Seitz, though, humorlessness and "darkness" equal "seriously." It's a view one encountered with depressing regularity in the early '90s, when the mad proliferation of the sort of rubbish "dark" comics being aped by this film helped to very nearly run the entire industry into the ground. Seitz doesn't stop short of implying the inverse either, that because THE AVENGERS has humor, it doesn't take itself at all seriously, another unfortunate manifestation of that same constipated early-'90s attitude.

In reality, the "serious" MOS is nothing more than a big, stupid, noisy, explosion-filled special effects show aimed straight at the lowest common denominator, a perfect example of the absolute worst breed of Hollywood tentpole spectacle[6] that is utterly off-putting to anyone with any respect for the character.[7] Awash in muted colors, mindless video-game violence,[8] trendy brooding and consequence-free disaster porn, it's a 2+-hour insult, a $225 million rape of a venerable American classic and a black mark on its 77-year history, one Warner Brothers now aims to use as the foundation of its big DC cinematic universe. Pity these iconic characters that they find themselves in the hands of such creatures.[9] 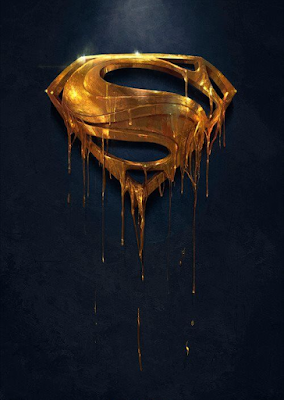 [1] The inappropriately bleak tone is accompanied by inappropriately bleak, shitty, washed-out, near-black-and-white cinematography--lifted, without alteration, straight from the Nolan bat-flicks. But, hey, at least Jon Peters got his Superman-in-black battling a giant robot spider at the end, eh?

[2] A pay-off for an earlier scene wherein, as a boy, Clark saves an entire bus full of his schoolmates from drowning but nearly has his powers exposed and his adoptive father Jonathan, the man who, in the mythos, plays such a central role in imparting to Clark his sense of moral purpose, tells the boy it may have been better to simply let them drown. John Schneider, who essayed Jonathan Kent for years on SMALLVILLE, recently registered the outrage every fan of the Superman mythos owes that moment.

[3] Bob Newhart would actually be a welcome presence because he would at least bring some humor to a picture so entirely lacking it.

[4] Thursday, Joss Whedon revealed he had designed his upcoming AVENGERS: AGE OF ULTRON as a refutation of this sort of thing.

[5] Or, for that matter, that nothing about humor or joy bespeaks a lack of same?

[6] That such movies have been a dime-a-dozen for a few decades gives some wider context to Seitz's effort to argue in favor of such films on the grounds that "it's nice to have a little variety."

[7] Superman's killing Zod at the end of the film created some controversy in the fan community, where many hold that Superman should never kill at all. I don't share this view; in his line of work, that sort of thing may sometimes be necessary. My own objection to that moment was his immediate and over-acted, depth-of-his-soul grief at having taken out a monster who had just committed mass murder against helpless innocents on the scale of a war, was promising more and was in the process of carrying out that promise. To kill someone is a terrible thing but this kind of totally unbalanced reaction suggests a rather profound moral deformity. Salve your conscience later, hero--there are people still dying in the rubble who need your help.

[8] Also mind-numbing. The movie turns into a CGI cartoon for what feels like about 40 minutes in which big sections of the world are being completely destroyed by battling superbeings yet the computer-generated images are so divorced from any semblance of humanity that it becomes boring, like watching a video game demo you can't skip.

[9] Though to be fair, Warner Brothers' tv-based DC products have fared much better. DC doesn't have a cohesive universe sewn between its tv and feature productions like Marvel and this has made a mess of the various projects, which feature or will soon feature two Flashes, two Supermen, two Deadshots, two Deathstrokes, two Bruce Waynes (both set in the present but one being a 40-something adult hero and the other being a young, pre-Batman teen), and on and on.
Posted by cinemarchaeologist at 6:31 AM