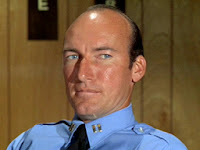 Ed Lauter has died, a victim of mesothelioma at the age of 74. The Associated Press article announcing his death refers to him as "character actor Ed Lauter," but that seems rather inadequate. Lauter is one of those guys everyone of a certain age who ever watched movies or television on a regular basis would recognize immediately--over 200 parts in movies and tv in a career spanning 42 years. He had a distinct look, a distinct voice, a strong presence, and he was damn good at what he did. He could play just about anything. To me, he's Claremont in BREAKHEART PASS and a killer of John F. Kennedy in EXECUTIVE ACTION and dour Captain Knauer in THE LONGEST YARD and the demented Hazel in DEATH HUNT and Captain John Sebastian Cain on SHERIFF LOBO, and the cop who blackmails Bronson in DEATH WISH III, and a million other parts great and small in pictures great and small. One night about a year and a half ago, I caught a flick he'd recently made called THE FRANKENSTEIN SYNDROME (also known as THE PROMETHEUS PROJECT). Though he'd worked steadily, even relentlessly, in the years leading up to it, it was the first new thing in which I'd seen him in a few years, and though his part was relatively small, I was sufficiently delighted to see him again that I started a nostalgic article about his career for this blog. Never finished it, though, which is probably just as well, as I wasn't really up to doing it justice at the time. For a cinephile like myself, there's a sort of bond with fellows like Ed. He's someone I've watched and enjoyed literally all my life, and in a medium that means so much to me he's so familiar he feels almost like a friend. Though I never even met him, it's not an entirely impersonal melancholy that accompanies news of his death.

He goes on, though. The AP reports that, ever the workhorse, Ed had finished several films that haven't yet been released, so though he's gone, we haven't yet seen the last of him. We probably never will, either. As with everyone who makes a mark on the medium to which Ed devoted his career, part of him--the part all of us knew--will live on. When it's an Ed Lauter, that's just fine by me.

--j.
Posted by cinemarchaeologist at 1:59 AM