Death of An Amateur

"Y'know, many times, they say [of me] 'he's an amateur,' and I sort of say 'Thank you very much,' because that means I love cinema. It's the real meaning of the word. And this amateurism is disappearing."

The amateur who spoke those words spent 59 years making movies. I suspect no one knows exactly how many. His filmography on the Internet Movie Database lists 199 features and shorts as director, but there are so many variants on so many of his films, so many unreleased works, so many pieces of incomplete projects left scattered all over the world that any mere list is probably doomed to hopeless inadequacy. Making movies wasn't, for him, a job; it was his life. He was a director, writer, producer, composer, cameraman, actor--he could do it all, and did. For six decades, he lived, breathed, ate, slept, walked, talked, shot, and shat film. Earlier this week, he died.

Over the years, this perennial amateur, Jesús "Jess" Franco, has been alternately praised as a genius and, more often, reviled as a hack. Both are, to an extent, true. Buffs of the kind of off-the-beaten-track flicks on which he spent his career like to fight over what constitutes the precise mixture. In this era of implacable dichotomies, one finds very few middling reactions to Franco--he tends to be a love-him-or-hate-him proposition, and people tend to attach great emotion to whatever conclusion they reach. If anyone can be said to be the ultimate cult director, he certainly fits the bill.

I've been a big fan of his work. More than that, he's a real source of inspiration. An indefatigable work-horse of fiercely independent spirit, he could take a few rolls of quarters, some bologna sandwiches, and some pals to a location and emerge, a week later, with a mini-masterpiece. He did it over and over again. I've never been one to dismiss his lapses (which can, at times, be rather spectacular), but I have argued, for a good, long while, that his shortcomings tend to be greatly overstated and his work often significantly underrated, even by those who admire him. I still think this is the case. Even his absolute worst pictures tend to have at least one moment of the brilliance that shines through the frames of his best, and when it comes to the latter, he has scores of genuine classics under his belt.

Over the years, I've written a few articles about him and about his films. I'd written about my first impressions of his work. I'd reviewed EUGENIE DE SADE, one of his best pictures. I wrote "Figuring Out Jesús Franco," an effort to explain the amaestro to heathens who didn't get it. When the lovely and talented Lina Romay, his longtime companion/collaborator/muse, died just last year, I wrote a fairly well-received reminiscence. These are just little pieces though, narrowly focused vignettes. If they work, they convey some of my enthusiasm for their respective subjects. Doing justice to his life in the event of his death is much harder.

Film was the life of Jesús Franco. His viewfinder was his ever-voyeuristic eye, his zoom was the beat of his cinema-infatuated heart, and what it pumped through his veins for six decades was sublime and ridiculous, sweet and savage, silly and superior celluloid, even when he'd switched to video. His career was a bona fide epic, like nothing else in the history of cinema. If trying to sum up that epic in only a few words is just as much an exercise in futility as the IMDb's filmography, the movies are still there, and can tell you all you need to know.

Rest easy, you damned old amateur. This fellow amateur will miss you. 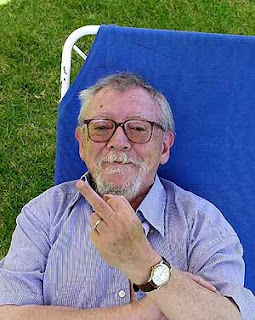 Posted by cinemarchaeologist at 6:23 PM