PROMETHEUS, Ridley Scott's much-hyped prequel to ALIEN is upon us, and in anticipation, Lebeau, over on Le Blog, has written some thoughts on the ALIEN franchise. I was going to comment on it, but, as happened a few months ago when I was replying to some things he'd written about Kevin Smith, it started to run a bit long, and, as then, I thought, "why not post it here?"

The "c" word is overused. There can be no denying it. Times being what they are, it has simply become a part of our casual, everyday conversation, alongside a lot of other unfortunate habits that progressively degrade our language. I've probably abused it myself on occasion. This, however, is a case when justice wouldn't be served by the application of any lesser word. 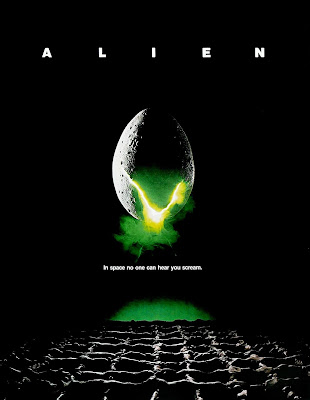 It wasn't entirely "original," though.  Lebeau quotes ALIEN co-writer Dan O'Bannon: "I didn't steal ALIEN from anybody. I stole it from everybody!" It wasn't quite "everybody." Plot-wise, the film was a warmed-over stew of basic story elements lifted from IT! THE TERROR FROM BEYOND SPACE and Mario Bava's PLANET OF THE VAMPIRES, with a tiny smidgen of THE THING and a pinch of post-Watergate Malevolent Authority from JAWS thrown in to taste.[1]

Still, it would be absurd to look upon the film as a mere retread. If that had been all there was to it, it wouldn't have earned the revered place it rightfully holds in cinema history. No, this ALIEN's DNA was a lot more rich and varied. First, it was just a hell of a movie, a great, gory, suspense-filled horror picture full of mystery and menace that hooked you early and held you 'til the end. Beyond that, nearly everything about the way the film is written, designed, performed, and shot is practically revolutionary, a giant leap forward for genre pictures. In ways that count--and that far outweigh any negative stigma that may attach to its acknowledged plot recycling--ALIEN was, indeed, an original. It's also--to clip another overused but entirely appropriate accolade--a film ahead of its time. So ahead of its time, in fact, that, as I see it, it is, for the most part, still ahead of its time.

Often--far too often, in my view--filmmakers choose to present these kinds of sci-fi/fantasy stories through the lens of melodrama. Dialogue of puffed-up soap-opera pseudo-profundity, delivered through broad, anti-naturalistic performances that often slip into positively overwrought. Two years before ALIEN, STAR WARS had set a standard for this species of film, and practically every line of dialogue in it is an example of this phenomenon. Top-shelf melodrama, sure, but no one at any point acting or sounding like real people in a real world.

The worlds in which these stories are set often don't look or sound real or seem plausible or feel relatable. Escapism, an important element of this kind of fiction, is often allowed to predominate to the detriment of such considerations,[2] which, while I'm certainly never down on escapism, I've always found unfortunate, because I think it contributed to the ghettoization of this brand of genre cinema for decades, and still contributes mightily to the Philistinian-yet-widespread perception that such films are inherently something between entirely unserious popcorn and low-grade trash for the socially impaired.

ALIEN is a key film in the development of a much more naturalistic approach to sci-fi and fantasy. The characters don't indulge in melodrama-speak. They don't use a lot of pseudo-futuristic pseudo-jargon or techno-babble. They yack about mundane subjects over dinner, complain about not being paid enough, talk over one another, argue at times. They're a band of ordinary working stiffs and seem entirely like people who could exist in the real world. Instantly relatable. And their world feels real. Instead of some clean, neat, sterile environment with a lot of weird-production-design-elements-because-it's-the-future-and-weird, their ship looks like an actual workspace--industrial, grimy, practical, full of equipment that looks usable.[3] When the alien, in its various forms, appears, it seems, in every way, like a genuine, organic being, one that is alien. The reactions of the various crewmembers to their increasingly dire situation feel quite real, as well. There is, in all of this, a reclamation of the genre from those whose (mis)treatment of it has resulted in its being so often dismissed as mere nerd porn.

ALIEN is special in many other ways, as well.

Its special effects--all practical, in the blessed pre-CGI era--are, almost without exception, excellent (the visual effects took an Academy Award in that category). Thirty-three years later, nearly all of them are not only still impressive, but, for the most part, blow away anything we get out of the computers that do all the work for us these days. To understand how impressive this is, consider what passed for special effects a few decades before ALIEN.

More broadly, the film is a consistent visual treat. Its tagline on release was "In space, no one can hear you scream," and space, as the film presents it from the opening, is a vast, cold, lonely, and inhospitable place indeed, a place where a seemingly-immense mining ship amounts to a tiny bit of nothing. A hell of a place to get into a jam. As the story proceeds to its conclusion, the ship becomes a claustrophobic death-trap, where a catastrophic fate-worse-than-death may be lurking literally anywhere in the smoke, flashing lights, and shadows of its seemingly ever-tightening corridors. By the end, Ripley, the last survivor, must try to save herself while trapped in the single room of a shuttle with the creature. All of this is pure visual storytelling--the last 20 or so minutes of the film contain almost no dialogue.

"Alien gave us so many indelible images that have seeped into pop culture... Alien (along with Scott’s Blade Runner) created a new set of visuals that would inform every science fiction movie made in the last several decades. Its cultural impact can't be under-estimated."

This was Derek Vanlint's first feature as cinematographer. He made only two other movies in that capacity before his death in 2010.

This was only Ridley Scott's second feature as a director. His next, BLADE RUNNER, was even more impressive (and more important). He capped off a trilogy of solid genre efforts with LEGEND, a film that, while not up to his earlier efforts, was still a visually remarkable and immensely enjoyable fairy tale.[4] Unfortunately, this was virtually the death of Scott as an interesting filmmaker. His artistic collapse was sudden and it was shocking but it was very nearly complete. Of his subsequent 17 features, only THELMA & LOUISE rose above the level of entirely forgettable, standard-issue Hollywood trash. There's a great deal of hype surrounding his present return to the ALIEN fold with PROMETHEUS. The last 27 years of his career offer absolutely nothing to justify this.

Lebeau covers the entire ALIEN franchise that followed, but there isn't really that much to say about the others. James Cameron's ALIENS was a big moneymaker and when younger, I was rather fond of it. Since I grew up, I don't find it holds up as well.

Lebeau says something about it I can get behind:


"The genius of Cameron's take on Alien was that he changed up the formula. Where Scott's film had been a psychological thriller which Scott described as a 'fun house', Cameron's sequel was a take-no-prisoners action movie more along the lines of a roller coaster."

I don't see this (or anything else about ALIENS) as any sort of "genius," but I do think it prudent for sequels to aim for a great deal more than merely repeating the earlier film and while Cameron sort of got that sequels should be different (though his own replicated the plot structure of the original so closely that it could virtually be called a remake), he didn't get that they should be ambitious and didn't do anything new or original with his own. There's a much-remarked-upon motherhood theme that really isn't that interesting, as most of the background regarding Ripley's own daughter that would have given it weight is absent, and is barely even there anyway (it exists primarily as an excuse for the big finale). The android doesn't turn out to be a betrayer, as in the first movie, but that role is taken by a different character. Whereas Scott took a plot made up entirely of elements ripped off from previous material and made something new and special from it, Cameron took a whole heap of things from previous films and made a big, noisy film made up of things from previous films. He copied a great deal of the work he'd already done as an art director, production designer and general jack-of-all-trades on Roger Corman's GALAXY OF TERROR and FORBIDDEN WORLD.[5] It wasn't enough to merely duplicate scenes from THE TERMINATOR, Cameron hired Michael Biehn to repeat the scenes Biehn performed in THE TERMINATOR. The film's much-commented-upon "Vietnam metaphor" was he and producer Walter Hill rehashing what Hill had already done much better in SOUTHERN COMFORT.[6] Most wearying, he managed to throw in just about every worn-out action-movie cliché in existence. If it had been done before (and done and done), Cameron wanted it done again for his picture. He replaced the one-man-army action hero in vogue at the time with a woman, and as a consequence, he's sometimes credited with the innovation of the female action-hero lead, but while this is wildly inaccurate, it is true that the success of ALIENS helped spur a proliferation of Ripleyesque screen tough-chicks that continues to this day.

I won't beat up on ALIENS too much. There's nothing wrong with a movie being a roller-coaster, and this loud, fast-paced, explosion-filled picture certainly qualifies as that. There just isn't really anything special about it.

The subsequent films continued this decline. For the most part, they're just terrible. Lebeau covers them, but I think I'll just defer to him and call this a wrap.

[1] As disarming as it is to see O'Bannon freely concede his "borrowings," he isn't always so open about them--at least once, he denied having ever seen PLANET OF THE VAMPIRES. Readers can view both films and form their own conclusions regarding the veracity of this claim. The existence of this footnote indicates my own.

[2] For examples, see absolutely everything in the very unfortunate STAR TREK: THE NEXT GENERATION.

[3] Since I knocked STAR WARS on the melodrama stuff, I'll note that it deserves credit for often moving production design in this direction. A lot of the world of that film looks dirty and run down--well-used, worn out.

[4] It was, however, one that fell back into that pattern of anti-naturalistic dialogue I was dissing earlier. The persistence of this approach and the sparsity of material that runs counter to it (the revised BATTLESTAR GALACTICA being a prominent example of the latter) is one of the ways in which I think ALIEN, today, is still ahead of its time.

[5] Both of which began life as intended ALIEN rip-offs, then evolved in more original directions.

[6] In SOUTHERN COMFORT, the soldiers were untested recruits and undisciplined weekend warriors who had, at no time, been in any sort of dangerous combat situation. Their repeated stupid decisions were an outgrowth of this. This film's colonial Marines, by contrast, are described as tough, seasoned vets and played by guys in their 30s. They turn out to be a lot of utterly ineffectual, all-mouth cretins who fall apart at the slightest sign of trouble and, at every turn, make their own situation worse solely because the script calls for it. (This note added 11 June, 2012)
Posted by cinemarchaeologist at 10:28 AM