A Few Words in Memory of Lina Romay 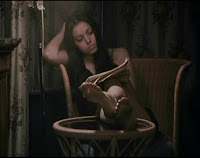 A few years ago, it was announced that filmmaker Jesús Franco and his longtime muse, companion, and collaborator Lina Romay would be attending the Fantastic Fest in Austin. At the time, I'd been falling hopelessly in love with a woman who was almost as big a fan of this pair as I, and I suggested we trek to Texas on the appointed date and spend some time in the flesh with this remarkable couple to whose work we'd devoted so many hours of our lives. She thought it a grand idea.

The economic straits of an indie filmmaker and small businessman being what they are, I was never able to make the trip. The woman I wished to accompany me on it is someone I came to love more than I've ever loved anyone or anything in this world, and she became my own muse, in much the same way Romay was Franco's. She professed to love me and I doubt a more perfect couple could be assembled in a laboratory by all-knowing gods. And then she threw me away like an old newspaper. The sparsity of my contributions to this blog in the 15 months since mirrors the sparsity of my contribution to living in that same time--without hyperbole, it has been the worst 15 months of my life.

The aim of today's little blog entry, however, isn't to offer up boring personal details about which no one cares a whit. I start at this point because I was reminded of something today. When I suggested to my love we go to meet Jess and Lina, I didn't have to make much of a pitch. We were fans. Once, we'd even cooked up a movie idea that was a sort of homage to their work, particularly FEMALE VAMPIRE and its derivatives (it's a project I plan to eventually produce). I did offer that Jess wasn't getting any younger, didn't come to the U.S. very often and that this may be our last chance to see him. Maybe it was. Jess is still around though. The reason I'm reminded of those remarks today is that news has just arrived that Lina Romay isn't. All those cigarettes finally seem to have caught up with her. She has died of cancer on Feb. 15th, at far too young an age.

Hearing about it so late, I thought word of this must have had to cross the Atlantic by steamship but as it turns out, Jess simply hadn't announced it yet. Probably didn't feel up to doing so. There hasn't been any press attention, which isn't surprising. In the last 40 years, Lina appeared in over 100 movies but few, indeed, would ever be mistaken for mainstream fare. Jesús Franco made obscure, mini-budgeted exploitation pictures, usually well beneath the notice of the "mainstream" and, with few exceptions, Lina Romay made movies with Jesús Franco.

Lina was a striking beauty and a born exhibitionist, which made her a perfect subject for the camera of the obsessively voyeuristic Franco. He preserved her every millimeter in celluloid many times over. When it came to performance though, it wasn't all about getting naked. Not even close. Lina, as actress, was absolutely fearless and it wasn't the kind of "fearless" generously attributed to A-list actresses when they make films in which they cry a lot, bare their breasts to the undeserving masses for a moment, behave in an unladylike manner or play a part that could hurt their mega-box-office by alienating some little coterie of their infinity of fans. This was the real bravery of someone utterly committed to her craft, a woman uninhibited by absurd egotistical concerns who was willing to do just about anything, whatever a part required. She's mostly renowned--by those who go about renowneding such things--as an earthy sex goddess, and, indeed, her sexually charged performances could be breathtaking to behold but she was a much more versatile talent than this suggests. She appeared in a wide variety of films--horror movies, comedies, thrillers, prison movies, mysteries, spy pictures, hardcore sex pictures--and played a wide variety of roles in them--strong heroines, heartless villainesses, hapless innocents, sympathetic monsters--and she was, for the most part, damn good at whatever she did. Lina's early specialty was what may broadly be described as "sexual frenzy," but she developed quite a range as she went along. Tim Lucas, in his excellent obituary, comments on this:

"...Lina became a skilled actress under his [Franco's] tutelage, acquitting herself admirably not only as vampire women and nymphomaniacs, but in roles requiring the deft touch of a light comedienne. She could carry a film without dialogue; she could be funny, tragic, insanely desirable, shocking, even embarrassing in ways that left one admiring her bravery. On the two occasions when she ended a film by screaming--LORNA... THE EXORCIST (1974) and MACUMBA SEXUAL (1980)--she could chill the blood like no one else, on the strength of her performance alone."

Lina also sometimes wrote, she directed, and she starred in a handful of films by other directors. Her collaboration with Franco, which accounts for most of her filmography, has produced a body of work like nothing the cinema has ever seen or is likely to ever see again. A lot of people would say the latter was a good thing but fortunately for such simple souls, the only penalty they'll ever have to pay is to miss out on something that was often quite special, just as I did when I didn't make that trip to Austin. When on the screen, Lina could make you laugh, cry, cringe, shiver, hate her or fall in love with her. Which, in itself, can sort of make you fall in love with her if you appreciate such things. I do, and I did. And I will miss her.