The Many Frankensteins of Peter Cushing

Brian, over at "The Scarecrow's Blogspot," has written an appreciation of THE CURSE OF FRANKENSTEIN, the film that, in 1957, heralded Hammer Film Productions' historic entry into Gothic horror. He doesn't say so in his blog but I believe he's even said (over on the Internet Movie Database) that this is his favorite Hammer film.

I wouldn't go that far. It's not among the best of even the larger Hammer Frankenstein series. Still, it does have its charms, the biggest by far being Peter Cushing in the lead role. Brian likes him, too:


"The ultimate success of the Hammer series derives from Cushing's making the part all his own."

Cushing is very good in the part. One hesitates for a moment about calling him the definitive screen Frankenstein only because it may be somewhat misleading, as Cushing didn't just play one Victor Frankenstein in that series--he played half a dozen. 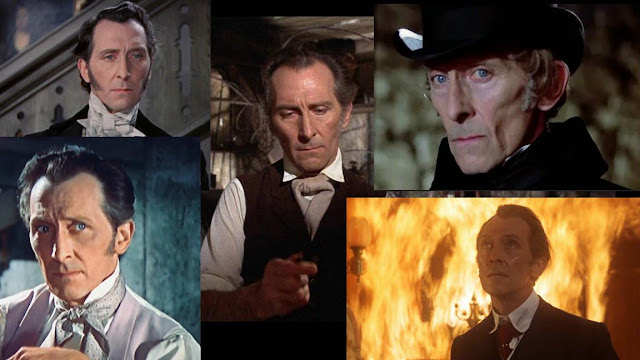 It's fortunate that Terence Fisher directed most of those movies. Like most of the Hammer hands, he was a craftsman working in a movie factory, not some unwavering auteur with a strong, committed sense of what the series should be. While his lack of any significant cohesive personal vision for the series--and, more to the point, the mechanics of the Hammer factory--allowed for discontinuities galore,[1] it also meant we got lots of different versions of Frankenstein out of it. And since Fisher was Hammer's top director, it meant a lot of them were really good.

One--the one introduced in THE CURSE OF FRANKENSTEIN--is the relatively one-note mad scientist playing at being a god and in the end being punished for it. The next was introduced in the next film, THE REVENGE OF FRANKENSTEIN, and is almost the polar opposite, a compassionate (if, shall we say, sometimes overzealous) fellow whose work has a genuinely humanitarian aspect but who, in the end, is undone by the ignorance and bigotry of others. The succeeding films all offer, speaking broadly, either variations on one or the other or combinations of both--new versions of the character continuing his work in many different circumstances. Cushing's Frankenstein can be a malevolent chaos-agent, compassionate, slyly witty, brilliant, insane (as opposed to evil), and he's making monsters, turning himself into his own monster, transferring souls (in one installment), working for what he sees as the betterment of mankind or just following a mad personal obsession. 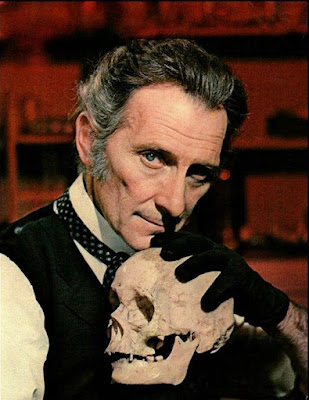 Which version one likes the best is probably attached to which of the films one likes best. While REVENGE isn't a great movie, I find its version of Frankenstein to be a lot more interesting. It's certainly a more complex character and he's partly likable because he really is partly likable (as opposed to being likable for being so charmingly evil). The CURSE Frankenstein doesn't have a great deal of depth and I've never cared for the idea of a scientist being punished for traipsing into the domain of God--it has an inherently anti-science bite to it I find quite distasteful.[2] On the other hand, Cushing is an absolute blast to watch when he's playing Just Plain Bad. In my favorite moment from CURSE, Paul, Frankenstein's teacher-turned-assistant-turned-critic, objects that what he's doing is inhuman. Victor retorts, "I'm not harming anybody. Just robbing a few graves." On a page, that doesn't look like much. The thing that makes it so great is Cushing's delivery--it's done offhandedly and with utter sincerity, thrown out while he continues what he was doing, as if he can't even imagine how anyone could possibly object to it. It never fails to make me laugh. The film featuring the most extreme example of an evil version of the character--FRANKENSTEIN MUST BE DESTROYED (1969)--is also widely regarded as one of the best of the series. The witty scientist contemptuous of the bigotry of his backward age found in AND FRANKENSTEIN CREATED WOMAN is great. All his work falls apart at the end and he just sort of shrugs, like he's thinking, "Well, shit, must be a day that ends in 'y'."

Fortunately, I don't have to pick a favorite. Cushing played them all and he was very good at every one of them. Even when some of the ideas embraced by the films went off into the ozone,[3] Cushing could still keep a straight face and sell them to an audience. Hammer's Frankenstein films, like all its series, are uneven in quality,[4] but even in the least of them, Cushing is always spot-on. Only once was he replaced in the role and the resulting film sucked like space, which just underlines more strongly that, to the extent those films can be said to work, he was a very large part of what made it so.

[1] That shouldn't be read as a slam of Fisher--continuity within all of Hammers' horror series was tenuous, at best.

[2] The theme doesn't really feature in the original Mary Shelley novel either, where Frankenstein's sin wasn't creating life but in neglecting the creature he'd given life.

[3] That soul-transplant business really just came out of the blue and went back there after that movie was over but it made for a really good movie.

[4] Though not, it should be said, as uneven as most of most of the others.
Posted by cinemarchaeologist at 5:55 PM