This remarkable film has been allowed to remain out-of-print for quite some time, now. Only a few weeks ago, Blue Underground was scheduled to re-release it, as they do with so many old Anchor Bay titles, but this has either been delayed or canceled entirely, which is very unfortunate. Here's my review of it, written back in the spring: 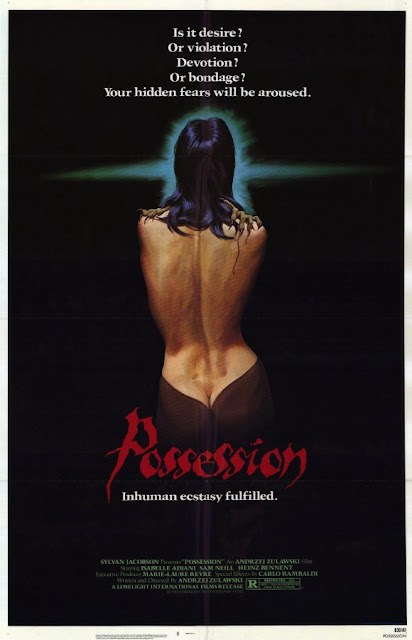 Back in 1980, Polish director Andrej Zulawski had an idea for a movie. Trying to sum it up, he probably made it sound overly "arty" and convoluted so he simplified his pitch--he told an American distributor it was about a beautiful girl who gets fucked by an octopus. What's even more astonishing about that tale is that, on that description, the distributor bought it and ponied up part of the money Zulawski needed to make the picture. The result was POSSESSION, starring Isabelle Adjani and Sam Neill. My cinematic studies were rather extensive last year--probably a few hundred movies in all--but POSSESSION was one of the absolute best I saw all year and one of the most intense movies I've ever seen. I felt utterly drained after watching it. It's exhausting, to be sure, but in a good way.

The aforementioned "octopus" wasn't really an octopus but it was a monster with a lot of arms and it did fuck Isabelle Adjani. The movie isn't "about" that, though. It's actually a very intense, visceral study of the disintegration of a once-functional marriage. Art reflected life--POSSESSION was made in the aftermath of the traumatic collapse of Zulawski's own marriage. His film offers an excruciatingly detailed and unflinching map of the emotional landscape of two people whose relationship has disintegrated and left them in absolute agony, their lives in pieces and the two of them trapped in a sort of emotional limbo. They can't stand to be together. They can't stand to be apart. Isabelle Adjani, lost in her pain and seemingly verging on madness, gives birth to a monster, a literal physical representation of her emotional state. At first, it's in a constant state of evolution. She sequesters it away, cares for it, nurtures it and yes, is fucked by it, until it finishes its last transformation. That transformation is a major plot twist. It's the sort of thing I should have seen coming but totally missed until the big reveal at the end. It is said that "a picture speaks a thousand words." The reveal near the end of this ups the word-count substantially.

And that isn't even the end, yet. Zulawski sees the end of this relationship as something akin to the end of the world. And in the movie, this is literally the case.

Zulawski shot and edited the film in a raw, frenetic style. The camera, as agitated and unstable as the characters, is forever moving, moving, moving, covering most of the interaction between the two leads in tight, claustrophobic shots that bore in so closely we can almost count the pores in their faces. Adjani, in particular, has a remarkable face for film and Zulawski makes perhaps the best use of it of any of her directors over the years. For their part, Neill and Adjani are just excellent and in a pair--a quartet, before the end--of extraordinarily demanding parts that could have been disastrous in lesser hands (and, one suspects, would have sent most thespians running home, crying for momma). Adjani was unnerved, even horrified, by the intensity of the film, dubbing it "psychological pornography." The Cannes Film Festival awarded her Best Actress for her work on it.

POSSESSION is rather long, just over two hours. Back in the mid-'80s, it was released on video in the U.S. in a substantially butchered version--the distributors apparently tried to re-edit it into something like an exploitation film. Needless to say, it quickly died (I can't even imagine who would have come up with such a project, or how they'd have gone about it). Luckily, at the dawn of DVD, good ol' Anchor Bay--back before they'd become a recurring joke/tragedy themselves--came along and saved it, releasing it in its complete form in the U.S. for the first time, accompanied by a very good Zulawski commentary track. I bought this one virtually blind last year, having read a single laudatory review that told almost nothing of the plot. I'm very glad I did.

In a sign of how badly Anchor Bay has stumbled since selling out to Starz, POSSESSION has been allowed to go out of print and stay that way for quite some time. But they do offer us ROSEANNE: THE COMPLETE 5th SEASON. A real monster, to be sure, but one that fucks us instead of Isabelle Adjani.

--j.
Posted by cinemarchaeologist at 3:30 AM